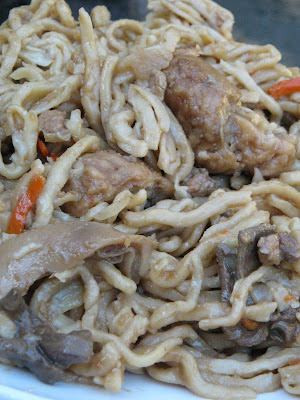 Strolling around Cagayan de Oro City one day I came upon a restaurant along the main road with the signboard "Bagong Lipunan Restaurant." I was almost taken aback, and visions of Martial Law and strains of Dahil Sa Yo suddenly accompanied me as I walked. I was a Martial Law baby, and the term bagong lipunan has been imbedded in my memory like a tattoo.

I almost passed it by, giving it a wide berth by crossing to the other side of the road.  But its doorway poster caught my eye, because it haughtily declared that the restaurant serves the best pancit in town. If something is sure to pique my curiosity it's pancit. So I overcame my childhood dread, and promptly entered the restaurant.

The interior almost brought back the dread. It was circa 1970s, or maybe even before, the same as the pancitans in Pangasinan. Plastic chairs, checked tablecloths, plastic flowers, ceiling fans. It was deja vu.

It was too early in the day, as there was nobody else inside, and the attendants seemed to have not gotten into their grooves yet. But I was asked if I was alone, and if I wanted to order to go. It turns out all servings of pancit are good for three to four people. I must have looked like I had the appetite of only one person, which a lot of people have the mistake of assuming. But I kept quiet, and replied yes, to go. Since I was returning to Manila that day, anyway, I'll just take home the pancit.

I ordered the salimi, which had offal on top of the meats and sliced meat rolls. While it cooked, I looked around the restaurant, having forgotten to bring along a book to read. There was a sign over by the cashier that said ostrich was available.

Ostrich is actually common fare nowadays in CDO, as there is an ostrich farm in the area. Supplying what and where, I don't know, since there only a few restaurants that I know of in Metro Manila which serves ostrich.

The night before, in a bar in Lim Ket Kai, friends were all over one another telling me what I missed - sizzling ostrich in an open-air drinking joint, since I didn't drink, for only Php200. The ostrich steak at Lim Ket Kai was priced at about  triple the amount, so I didn't call on it.

Remembering that episode, I asked about the ostrich. 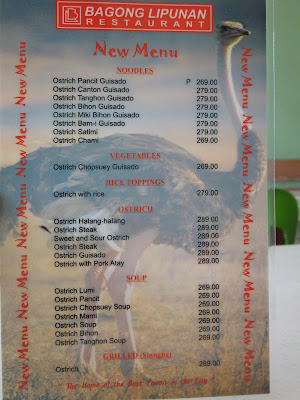 And I was handed another plastic-laminated menu, on which were listed ostrich cooked every way you could think of. Pancit, saute, as rice topping, steak, in soup, grilled. I ordered the most unknown dish to me, relatively, which was "Halang-Halang." It was confirmed that indeed it contained the viciously fiery small green sili, and I thought it would do good to a gamey meat. To go. 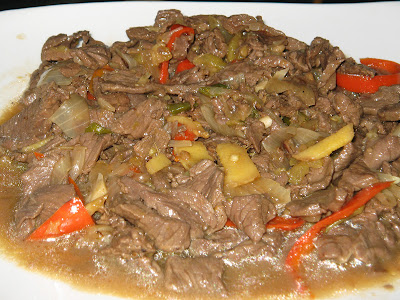 It was a good choice, as the flavor of the ostrich stood out, having been sauteed only with ginger, red bell peppers and the halang-halang. It was tender, and beefy, without the lip-coating fat. And the halang-halang, surprisingly, were mild, just providing enough heat to whet the appetite.

The pancit was good, too. Heaped with meat, noodles were chewy, generally tasty and filling. I'm not sure about it being the best in CDO since it was the only pancit I've tried there, but it sure can brag about it.

what a great sense of adventure, in experience and in food. i'd like to try ostrich too. those look similar to cuts of beef.

wooooh this sounds interesting... I havent eaten ostrich before..

wow! Where can i find ostrich dish in manila? great blog!

Their pansit is delicious but I was so dismayed by their service when I called 8561193(Velez branch) and try to order pansit guisado for pick up in 20mins. When i got there, they told me there is no name (------) in the pickup order list. My dad who pick up the order got mad at me bcoz the were wasting time and gas for the car.They travelled from Pueblo to downtown to pick up the pansit but NAPALAW mi. When I call 8561193 again, its under repair. What happened? Please do fix this. I know that you are busy esp when its lunchtime but you should improve pick up orders bcoz there are customers who expect their orders even if its telephone orders.