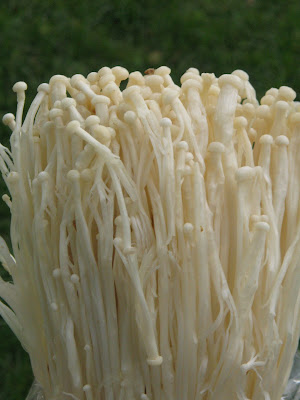 ﻿The full name of this mushroom is enokitake (Flammulina velutipes), so I guess the more popular name enoki is just a nickname. It goes by the label golden needle mushroom in English, and the unpronounceable jīnzhēngū (nickname jingu) in Chinese, paengi beoseot in Korean (no nickname), and trâm vàng (kim châm) in Vietnamese. No local name, as it is not endemic in the Philippines.


The English name is apt, as these are very tiny, slim fungi, like pins. The wild ones are reportedly pale brown, like mushrooms found in the country. Cultivated enoki are ivory-colored, looking very dainty.

I've only ever eaten enoki - the cultivated kind - wrapped in grilled bacon in  Japanese restaurants, or as a part of shabu-shabu, until recently. I used to see them in the fresh vegetable section of local groceries, sealed in plastic bags, but always bypassed them because they sold for the price of gold.

But starting last year small bags were selling for as little as Php30 per 100 grams in the major supermarkets in Metro Manila (SM, Metro, Landmark). At Carvajal alley in Binondo I was able to buy 250 grams' worth for only Php50. All of them had been imported from Korea. 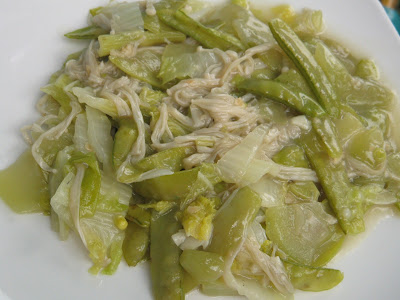 So I've been eating lots of enoki lately. And I'm happy because cooking at home I can forgo the bacon. What I usually do is mix the mushrooms with vegetables commonly planted in Baguio for a sort of chop suey - Chinese pechay (napa cabbage), chicharo (sweet pea pods), thin slices of sayote fruit, and chopped celery and leeks and lots and lots of minced garlic for flavor. The stir-fry is then splashed with dissolved flour or cornstarch for a thick sauce.

Like other mushrooms, enoki is rich in anti-oxidants and protein, so this chop-suey is actually a complete one-pan meal. But I'd like to roast it with other mushrooms for this roasted garlic mushroom sauce. I found small pearl mushrooms -also imported - at the grocery last night, and they would be fun to mix together, probably with fresh button mushrooms, too, if I can find them, though they are mostly available canned.

I'm sure enoki would be great with the dishes I commonly cook local mushrooms in, with papaya, or sayote tops, or in soup. So I'm all set for a meatless Holy Week.

Email ThisBlogThis!Share to TwitterShare to FacebookShare to Pinterest
Labels: from around the world, pising (gulay/vegetables)