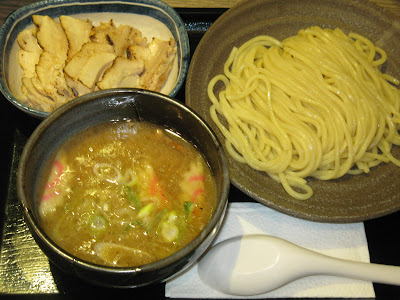 There's a Japanese noodle shop I've been frequenting these last few months, bringing different sets of friends to introduce it to. But with the hot months set to prevail upon the country I'm afraid I won't be going back there soon.

The restaurant has a very short menu. And most of the showcase items - noodles in thick, rich, visibly oily soups - seem to have been made for colder climes. It's a Japanese restaurant, after all.

Occupying a whole page of the 3-page menu is the tsuke-men, claimed to be the current rage in Japan. A sort of deconstructed ramen, it's wonderful with its thick, absolutely chewy noodles that is more substantial than ramen but is short of the ampleness of udon.

The noodles are served separately from the soup, because they are dipping noodles. The bowl of robust soup, or more appropriately dipping sauce, calls to mind a boiled down kalbi-jim. Richness is cut down by an undercurrent of kumquat, or probably yuzu. So that you come to understand why the noodles have to be cut that fat. 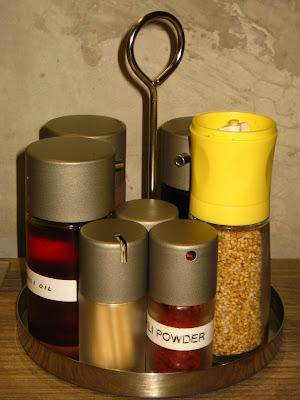 The restaurant prides itself in its soups - so much so that salt is unneeded. You are invited to yield to the layering of flavors. In the myriad of bottles in the condiment tray that entices one to shake and douse and sprinkle, not a bottle of table salt can be found. I tend to hog the chili-sesame oil - heat is mandatory after several spoonfuls of richness.

Particularly since the specialty of the house is cha-siu - paper-thin cuts of pork belly that all but melts in your tongue like a smear of butter. Good quality butter. It's as creamy, too. 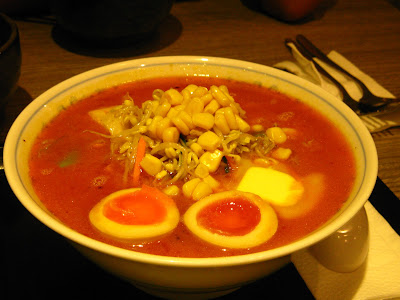 There are several variants of ramen, and you can choose which noodles to come with it. I like ramen, so I order the thin noodles, but they're still broad enough. And that is because the ramen broths are full-bodied, too, with a sheen from the coating of oil. My spicy miso ramen is blood-red, but the heat isn't enough and it soon cloys. 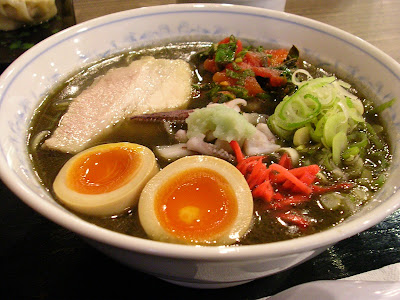 In February there was a limited run of squid noodles in ramen and kae-soba versions. I tried the ramen, and the broth was black from the ika ink. There were a lot of things going on, on top - sauteed tomatoes, a slice of that cha-siu, silky soft-boiled egg, grated horseradish, chopped leeks and some pickles.

Sadly, all those things weren't powerful enough individually to contradict one another. The pickles weren't sour enough, the tomatoes bland, the horseradish lacking its characteristic zing. Even the squid flavor, despite all that darkness, was missing. To top it all off, the squid was rubbery.

Good thing the ika promo has been replaced. Ongoing is a shrimp and salmon kae-soba promo for Lent. 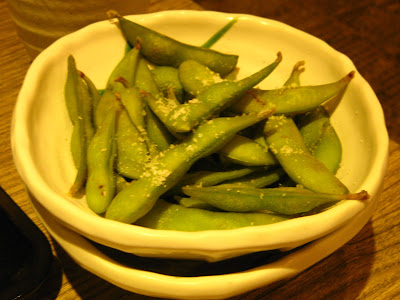 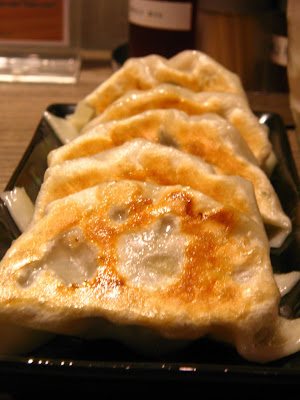 After all the lavish dishes I find comfort in what's simple. Like a plate of simply salted steamed edamame. How I licked those grains of salt! And the crackly chewy gyoza, which must be the best I've tried. I can't remember which gyoza I used to like best, but this now tops the list. It makes me forget all the rest.

That velvety soft-boiled egg can be ordered by itself, along with a side of simply steamed yasai. If I go back these are just what I'd order - I've had enough of luxuriousness for a while. 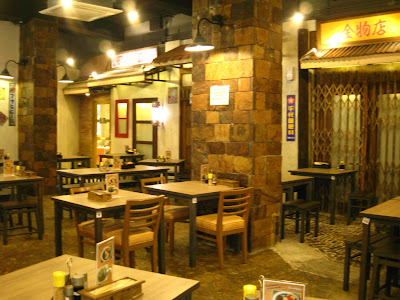 It's marvelous, though, to step from the street into a place that makes you think you stepped into a hidden alley. 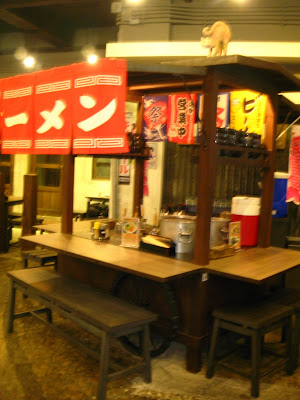 With a noodle cart, the al fresco ambience is completed by roughly paved floors imitating old Japanese streets. There's a wall of broken tiles - as it was in Hiroshima, perhaps? 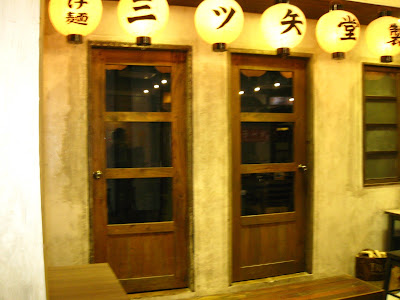 Email ThisBlogThis!Share to TwitterShare to FacebookShare to Pinterest
Labels: from around the world, pancit (noodles), restaurants, sabaw (soup)

Excellent writing! After reading your review, I suddenly had the urge to return to that hidden Japanese alley. So when's our next trip? Tomorrow perhaps? Ed of Jinan ;-)

Ed, you know you only have to appear at my doorstep....