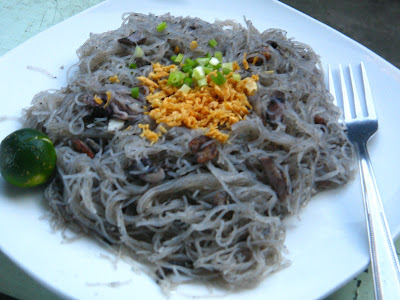 
Pusit (squid) in various sizes is plentiful these days in Cavite. Finding some seemingly infant ones at Php40 for a small saucer's worth, I thought it would be nice for some seafood pancit at home, along with a handful of little shrimps.

I like to use "Super Q" bihon, which cook to a soft bite. The noodles are usually pre-soaked for an hour or two.

The shrimps were peeled, the shells, heads and tails steeped in hot water. The hot water was strained into a small pan, the shrimp peelings put into a mortar and pounded. More hot water is added, then again strained into the pan. These steps were repeated until the shells were pounded to a fine pulp.

The squid "plastic" skins were peeled, the plastic "swords" and everything else inside removed. I usually remove the eyes, but for their sizes it wasn't necessary. They were then sliced.

I fried a whole head of garlic, peeled and minced fine. When they were getting all blistery I put in the peeled shrimps, then the squid slices, stirring them around the frying pan. Everything promptly turned black - I wasn't able to entirely remove the squid ink sacs. 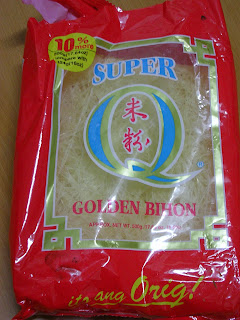 I became color-blind at this point, and proceeded cooking. I transferred the seafood mix onto a plate, then poured the shrimp water into the pan, seasoning with patis, ground black pepper, chopped wansoy (coriander/cilantro) and thinly sliced celery stems. When the shrimp broth was boiling, the pre-soaked noodles were added, then stirred until most of the liquid was absorbed.

Stir-fried noodles have to be served immediately. My pansit guisado had turned ebony instead of bronzy. Ignoring gasps from the kids, I twirled it onto a plate and heaped the seafood mixture on top, along with finely minced garlic fried to a crisp and chopped spring onion. For added flavor and crunch, I even mixed in crispy tahong, a pouch of which I bought in Bacoor.

It looked totally unappealing, and the kids shook their heads when offered some. But I had learned from my mother that an extremely frightening mulagat (big eyes) would go a long way in instilling obedience in children, so I applied the technique. The kids ate, tentatively and with eyes squeezed tight.

My kids inherited my love for noodles. In no time at all they were scraping their plates clean. The eldest, who feels squeamish about the texture of squid - I don't know why - asked for seconds. I had seconds, too, for with the fried garlic and a squeeze of kalamansi it was actually, terrifically! good.

Being averse to pork for the longest time I had a hard time eating pancit in restaurants, for most feature fatty slices of pork, and were stir-fried in rendered pork fat. Having eaten pancit choku at revered Asiong's Carinderia I knew my favorite noodles can be awesome without pork, or any meat at all. And now I know we can have it at home, too.

haha! the mulagat always works. but you must have shown them a really threatening one.

I have big eyes, Lou, so the mulagat was magnified, hahaha!

You might have to use big eyes on me too to get me to try that! LOL. I love those types of noodles though so maybe if I close my eyes first....

Close your eyes and have faith, Mrs. L, hahaha!