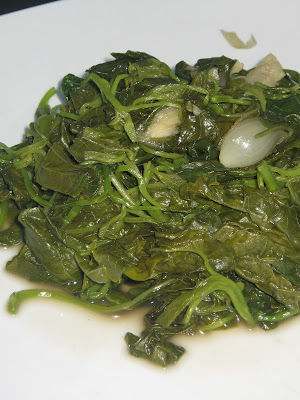 Supposedly known as edible spinach or yin tsai or Chinese spinach (Amaranthus gangeticus), it is different from the more popular Baguio spinach, which has thicker leaves and stems. The amaranth has paper-thin leaves that go limp and wilt in just a few hours, the stems just a tad thicker, like that of the saluyot. The short sprouts are uprooted, so the leaves come to the market still sporting muddy roots. 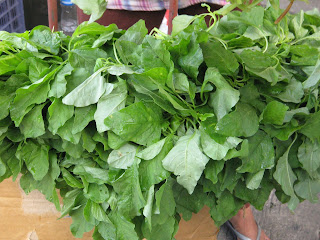 I've only just seen several bunches at any one time being sold in the Cavite City public market, and only by just one or two vendors. I haven't come across it in the vegetable section of the several supermarkets I frequent, but large bunches of it is available in Divisoria. My lola in Frisco used to buy lots of it from the Balintawak market.

It is not sold year-round. Just a few weeks a year, and one time it appeared just once, then disappeared never to be seen again. I've been buying it for several weeks now, though, so it must be in season.
Before I came to Metro Manila I never knew about this spinach, though I bought Baguio spinach when I went to the mountain city. We didn't eat it, and as far as I know it wasn't sold and eaten in my hometown. I only came to know about it when it was served at the Frisco home of my lola, mixed with monggo in lieu of the more traditional malunggay. 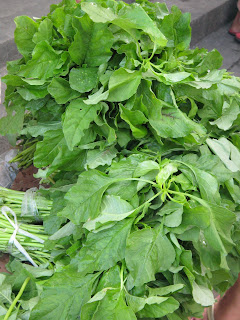 When I attended an organics seminar conducted by the Food and Nutrition Research Institute of the Department of Science and Technology and learned that, apart from malunggay, there are five local organic greens that are super-packed nutritionally, and that this spinach is one of them, I kept a look-out. So I've been having it ever since whenever I can find it.

And I've just realized I've foregone Baguio spinach in favor of it. It's cheaper by the kilo, since it weighs far less, and it's more accessible when in season. There seems to be no difference in taste, and even in texture. I think what I buy is the white, round-leafed variety. 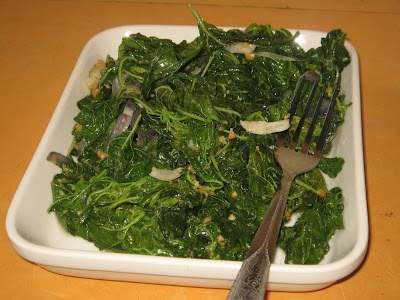 I've heard some people mix this with sinigang, that ubiqiuitous Filipino soured broth with meats or fish. But I haven't tried it yet. I have difficulty parting with tradition - I have kangkong with sinigang using meats, or kamote tops with fish. I also ever use malunggay or ampalaya leaves in my monggo.

Maybe that's because I like to eat spinach by itself. Sauteed with lots of crushed garlic - as much as a whole head - until wilted to a dark green. For crunch and an additional dose of garlic breath, I sprinkle the sauteed spinach with minced garlic fried to a crisp. Season with salt to taste, but it's not necessary, especially if it's going to accompany some fried or grilled fish or meat.

It can be served hot from the pan, or cold with a generous douse of sesame oil, and some sesame seeds as well.

I think the sauteed spinach and the popular "green soup" or spinach-seafood soup served in many Chinese restaurants, which I order every chance I get, use this variety.

Amaranth is a rich source of calcium and Vitamin A. It also has phosphorus, Vitamin C and traces of the B vitamins thiamine, riboflavin and niacin. It is a good supplement food for growing children and lactating mothers. Patients suffering from fever, hemorrhage, anemia or kidney problems are given amaranth for its medicinal value.