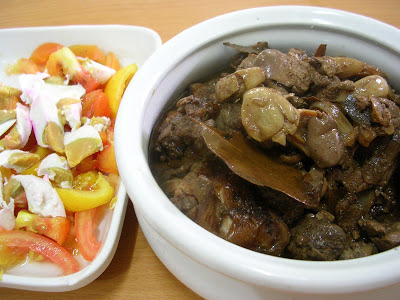 I could eat this all day. Breakfast. Lunch. Dinner. Every day. It gets better as it is reheated, again and again, the meat falling off the bones and absorbing the stewing liquid that is so good on hot steamed rice. The ultimate Filipino comfort food, whether there's a deluge or the day is close to broiling.


I wake up mornings happy if I cooked a big batch of adobo the day before. All that is needed for a joyous breakfast is a pot of rice, sliced tomatoes and salted duck eggs, and the reheated adobo. A cup of hot chocolate and it is bliss, though at this temperature I can forego that and settle instead for a tall glass of mango shake, or ice-cold milk tea.

There is something about vinegar that calls to the Filipino palate. Perhaps the appetizing sourness is an inherited collective memory. We stew, marinate, steep, dip - fish and meats - using vinegar, which comes in a wide range of acidity, flavor, source and color.


Who can say what is a pure Filipino dish? Adobo lovers point to it, but its passage along the Pacific on galleons from Latin America has been documented that the claim cannot be substantiated. I think what can be substantiated is the adobo existing on these shores before the Spanish came, which is adobo using solely vinegar. This form of adobo still exists in various regions around the country today, including Cavite.

But I question the purported Mexican adobado origins of the more common adobo with soy sauce. For isn't soy sauce but of Asian origin, probably Chinese? And we'd been dealing with sangleys after all since the 10th century.

Anyway, there are probably as many adobo recipes as there are islands in the Philippines, but this is how I like mine. Half a kilo of chicken thighs, bone-in; 1/4 kilo chicken liver; 2-3 whole heads of garlic, peeled; a handful of whole black peppercorns, three pieces dried laurel leaves, 1/4 cup vinegar, a splash of soy sauce, three pieces green siling haba/siling pang-sigang. I pad the bottom of a thick pot with the garlic, then layer the chicken, and top with the liver and the rest of the ingredients except the sili, which is put during the last five minutes of cooking. I pour in 2-3 cups of water, put on the lid and cook over gentle heat for 2-3 hours.

After cooking the pot is placed on the dining table to rest overnight. The pot then proceeds to waft a lustful aroma that calls to appetites, even after a full dinner, and endangers it to being violated that same night. But I send it a watchful eye, and command everybody to go to sleep.

I diverge from at least two edicts of adobo cooking with my adobo. One is to mix in the liver on the last five minutes of cooking so it is pink to the core when eaten. The other is not to add water.

I put in the liver from the start because I like it almost disinegrating, so it flavors the stewing sauce. I slice the livers to small pieces for this very purpose, so they are almost melted when I'm fininshed with my adobo. As for the addition of water, I like adobo sauce so much that I spoon it onto my plate, and I like to mix it with my mound of steaming rice. The water ensures that the long cooking doesn't dry up the dish, with enough sauce left so I won't have to fight over it with the kids.

The local salad of tomatoes and itlog maalat imbues the adobo with a different strata of sweet-salty-sour. It also ensures that I eat no more than what's decent amount of rice.

i'm getting chicken liver tomorrow, put them in the adobo, and not tell anyone. teeheehee.