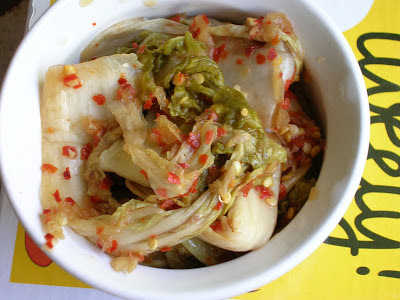 Koreans arrived in droves during the last quarter of the previous century, and many shops catering to them sprouted, first in Metro Manila, then radiating out towards the cities in nearby provinces, then to the cities down south that served as entrypoints to tourist destinations, particularly in Cebu where there is a direct flight connecting the two countries.

So we were introduced to Korean culture. And even before the burgeoning of the restaurant scene by the 1990s, Korean restaurants have already been part of city landscapes. I remember Korean Village in Ermita (haven't been there recently, don't know if it still exists, or even if Ermita itself still exists), and the adjacent old houses turned into restaurants along Burgos in Makati. I remember in particular one restaurant along Kalayaan Avenue in Makati, which I never ventured in, but was pointed out to me as serving boiled dog in soup. As if I'd be interested.

It took less than a decade for Korean stuff to be assimilated into the Pinoy consciousness. This length of time is a blink compared to the time it took for us to assimilate things Chinese, with whom we have been dealing with for more than a thousand years.

The level of assimilation of Korean versus Chinese isn't on the same level, however, at least in as far as food is concerned. For most of the Chinese traders who reached our shores were Cantonese, who have fairly benign cuisine. As Korean food is liberal in the use of spicy heat, its robust integration into the ordinary day-to-day meals of Pinoys is limited. Filipino food is not pervasively hot, and our use of spice is relegated to a few dishes, and only to cut richness, or remove lansa from raw seafood.

Me, I have no problem with spice and heat. So I embraced the cuisine with the same enthusiasm as I give to anything new. I sometimes even prefer it over Chinese, as it comes across as simpler, with a "cleaner" taste, just like Japanese food. And because much of it involves fermented "sides," which is probiotically-rich, I have welcomed it into my home as well.

I started with introducing the cuisine to my family. A Korean restaurant was where the hubby and I first dated, actually. Then I regularly bought kimchi for eating with grilled bangus, other seafood and meats at home.  My elder daughter was enamored of it, and consumed pouches and pouches of the stuff.

I had been content with buying pre-made kimchi, for I thought to let the experts keep their trade. But when I read over David Lebovitz' kimchi recipe and discovered how easy it was to do, and how cheap it would be to make your own considering the amount of the fermented vegetables we consume, I took matters into my own hands.

So kimchi has been the flavor of the house this year. David had trouble hunting for Korean chili powder in Paris - I didn't bother, though I'm sure it is available in most supermarkets. I have this big, big jar of dried chili flakes that has been occupying valuable space in my refrigerator for a long time, so I thought to turn into something more productive. 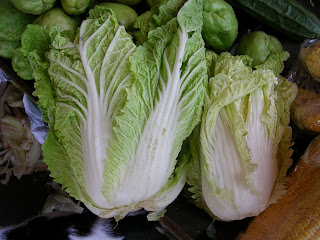 The chili flakes had a second life, and didn't in any way differentiate my kimchi from the kimchi made with legitimate chili. ﻿And I got to know that the Chinese pechay that has long been a part of Pinoy meals is called napa cabbage.

I like to use the small, green ones that are about half the size of the regular, so the leaves are not so long. Making kimchi is just a matter of peeling, slicing, steeping in a salt solution, mixing everything together, and letting it ferment. The fermentation can be as short as a day, two to three days at the most. Storage is advised to be two weeks in the refrigerator, but I make big batches and keep them by the back wall of the ref to keep them from fermenting too much.

The benefits? Besides the practical side, I get to have a say in the salt content and the heat level. I can have more of the radish and the ginger, too, if I choose. And we can have kimchi anytime. And I redeem myself in the eyes of the kids, for I have made it a rule that processed food should be consumed very rarely, if at all. Since the kimchi I used to buy came in a pouch it appeared processed to them. Now they are proud that we make our own. What's more, it is an excellent alternative, sweat-inducing side to adobo.

Please find the recipe here. Mine replaces the Korean chili pepper paste and Korean chili powder with dried chili flakes of roughly half the aggregate amount, but feel free to use more.

Email ThisBlogThis!Share to TwitterShare to FacebookShare to Pinterest
Labels: from around the world, pising (gulay/vegetables)

korean cuisine appears to have taken root here in the u.s. too. my daughter gave me some of her delicious homemade kimchi a few months back, along with a discussion of probiotics. it seems i don't have to take yogurt if i have kimchi.

But they can be complementary, and yogurt can cut down the spice, that is, if it bothers you. Was the kimchi made like this?

yes, it was spicy, but good spicy. my stomach never complained which was remarkable since tabasco, sili, and the like usually cause discomfort for me the next day. having yogurt to complement them is worth a try. thanks.