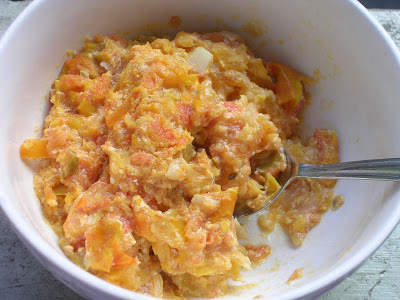 We have vegetables most meals. But for breakfast it kind of doesn't fit, like it's too serious so early in the day. Though I know it doesn't have to be, and it's just psychological.

But we do have fresh fruit, first thing in the morning, so our empty stomachs get to absorb most of the beneficial natural vitamins. And because tomatoes are supposedly fruits, they usually accompany  rice breakfasts. The sour-sweet juiciness greatly complements smoked and other deli meats, and pairs perfectly with fried marinated fish, or smoked or salted and dried,  that are normal Filipino breakfast fare.

Tomatoes pair even better with vinegar stews adobo and paksiw. Their mild sweetness plays with the intense sourness (plus saltiness in case of the adobo) of the dishes, and provide a layer of flavor that teases the palate.

We usually just slice fresh tomatoes and mix them with bagoong alamang, or salt if that's not available, in a salad. If there's salted duck eggs that's sliced and mixed in, too, but in place of the bagoong or salt. But they say that unlike other fruits, tomatoes are much more beneficial cooked than fresh. And one simple step takes the tomatoes to another level, at the same time maximizing their potential.

There's nothing simpler than sauteing tomatoes. It's the first thing I learned how to cook. It's just peeling garlic and crushing them to release flavor, then putting them in hot oil to stir fry. Then slice onions and mix them in. I slice the tomatoes and separate the seeds, but other people like the seeds, so it's optional. The tomatoes are stir-fried along with the garlic and onions, then seasoned with salt and pepper. Cooking time depends on how you like the tomatoes - whole, wilted, melting or disintegrated - taking from a minute to ten.

This is already good to eat, but to make the dish richer beaten eggs are added in and incorporated. Now this can go two ways. Either just an egg or two is mixed in, just to enrich, the tomatoes retaining dominance in taste and visuals. Or add four or more to make an omelet. For the latter the sauteed tomatoes is mixed into  beaten eggs before it is poured in a frying pan and allowed to set, or stirred around to get large soft curds.

Adding other ingredients to this egg-tomato dish can take it along many different directions. Herbs, perhaps, or leeks, or green leafy vegetables like pechay or cabbage. Maybe even sardines. For us, though, in Pangasinan, we add a thumb of ginger peeled and sliced thinly, which goes into the frying pan before the garlic. It brings a  bit of heat, and spice, and a sort of comforting angle to the dish. For you see, it evokes home-cooking, that which was made by lolas and mamas and yayas who evoke the nurturing zone of childhood.

So I never forget to buy tomatoes during my weekly market jaunts all through out the year, that I have a line graph of its price per kilo year-round here in my head. It's at rock-bottom now, so I've been buying more than we need for a week, which we saute and freeze for the time when the price escalates, which is when the typhoons hit.

this is another one of those "haven't had this in years" dishes. it conjures what are now vague but pleasant tastes and images of provincial visits from a time long gone. this one i will definitely make.