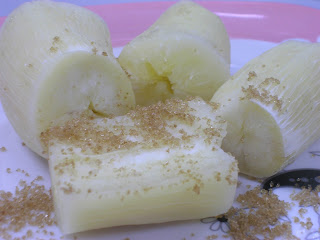 Also known as balinghoy, and cassava in Anglicized form. The term kahoy, local term for tree, was probably annexed due to the thick, brown skin that makes the roots, or humongous tubers, look like small, blown-up tree trunks. 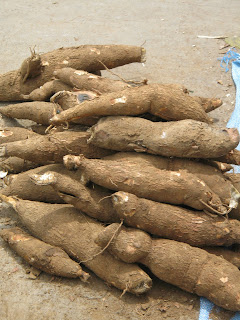 Kamoteng kahoy are available year-round, at stable, very accessible prices. But when it has started raining, carts and carts piled heavy with tubers still sporting clumps of dark wet earth arrive at the markets. These are submerged in basins of water to remove the soil, and some get to be peeled down to their white, smooth flesh. 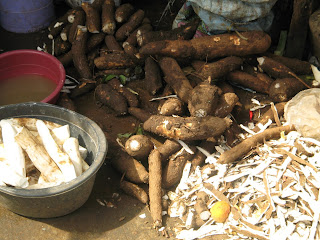 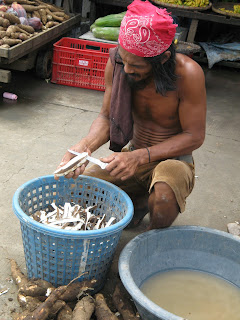 
I buy when I chance upon those tubers just out of their underground wombs, for the risk of cyanide poisoning gets higher the more time the cassava spends out of the soil. I don't buy the peeled ones, though, as I prefer that I have control over the rinsing water used. 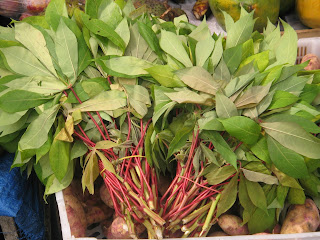 I've never eaten cassava leaves, but they are sold as vegetables at the Cavite City public market. I don't know how to cook them, naturally, and I'm even more afraid, because cyanide concentrations occur the highest in the leaves. Those red stems look beautiful, though, and remind me of the stems of the madre de cacao which we used to curl our hair with when we were children. 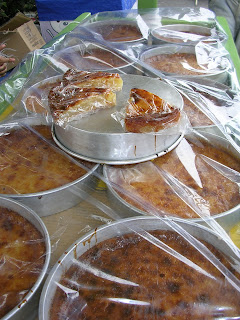 Kamoteng kahoy is more popularly known made into cassava cake, or more like cassava pudding - a gelatinous thick disc baked in an oven then layered with a rich topping of eggs, milk, sugar and coconut cream and broiled. It's a pain in the butt - and the arms, both arms - to make, as it involves grating the peeled cassava to a fine consistency. And then it takes so long to bake - about an hour - that the power consumption - both manual and electrical - is not worth it if making just one pan of pudding for personal satisfaction. 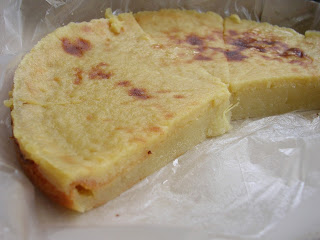 Of course I know I'm demeaning home-cooking and the philosophy of doing everything from scratch, etc., etc. I know that the expressions on my kids' faces are priceless when they realize what we're eating has been made by their mother in our own house.

But it's a relative observation. One can buy excellently made cassava pudding/cake almost anywhere, at Php100-150 for a piece that's good for a dozen people. I don't think the power consumption from an hour of baking your own cassava pudding can match that price - it's probably double, still not counting my grating and mixing efforts and my scratched fingers.

So I buy when I can - commercially made cassava pudding, that is. We have our favorites, like Ralo's from the time my husband stayed in Lipa City for two years. The one sold at the kiosk before the toll exit to SLEX from Binan is not so sweet but so maligit and malagkit. Our new discoveries are the ones sold by the Catholic church in Bacoor (photo after the cassava leaves), and one made by Bon Aliment (photo above), which I'm not sure is commercially available. 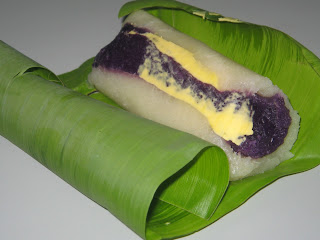 In Pangasinan we have cassava suman, called pinais, grated and wrapped in banana leaves and steamed. In Tagalog country they like nilupak, also grated but cooked in a pan. Photo above is a version from Batangas, which embraces a soft log of ube halaya and smeared with margarine. 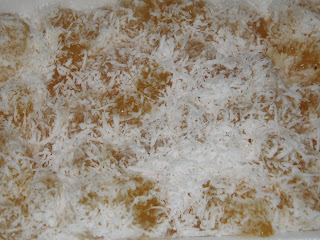 Cassava becomes premium when made into pichi-pichi, small round balls of gelatinous ecstacy that melt at the slightest flick of the tongue. They are sold smothered in grated coconut so are good only for the day. Some versions are flavored with pandan so are dyed green. In Western Visayas they have puto lanson, grated cassava shaped into fat balls and steamed.

All these are regional treats that require a lot of manpower. I don't have the manpower right now, though I'm starting to train the kids. When they stop complaining after just a few minutes' pass at the grater, I'll start getting ambitious. But for now, I'll be happy with a peeled kamoteng kahoy boiled til soft but still with bite. Sprinkled with brown sugar, it's a heavy snack that is up there at the top of the glycemic index. Its sentimental value is incalculable, too, as it recalls childhood afternoons of a much simpler, and more grounded to the earth, time.