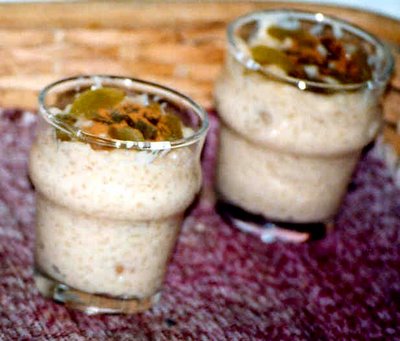 At the Panamian food stall at last year's DFA International Bazaar was a cold dessert in a cup called arroz tres leches, or rice with three kinds of milk. It was one of several Panamian food offerings which were locally cooked/made, and mostly involved rice.

At first I was intrigued about the dessert's name, wondering what kinds of special milk were used. Upon inquiry, one of the ladies manning the booth answered that they used fresh milk, evaporated milk and condensed milk, and that the dessert also contained some raisins and a sprinkling of cinnamon/nutmeg. Though I was a bit disappointed with the ordinariness of the milk involved, I still bought a cup.

For rice is a staple in Philippine cuisine, omni- and ever-present, eaten steamed or stir-fried with fish, poultry, meats, vegetables, fruits, coffee, chocolate, from sunrise to sundown. It is also made into sweets, like cakes and puddings, in various forms - ground, toasted, steamed - usually mixed with gata or coconut cream and sugar. Sweetened rice in all its variations are eaten as mid-morning or afternoon snacks, or as breakfast, and even as dessert.

But I have not yet come across a traditional Filipino rice dish using milk. Milk freshly warm from a carabao's teats poured over steamed rice, perhaps, for breakfast, but the common milk used with rice is from the grated meat of a coconut, mixed with hot water and squeezed dry. A lot healthier fare, if I may say so.

But the arroz tres leches tasted heavenly, nicely spiced, and introduced a new dimension to rice-eating. So when I got hold of quite a few kilos of newly-harvested ansak-ket (malagkit, glutinous rice), I vowed to make some rice pudding with milk in-between making the traditional kanen (kakanin, rice puddings). I used Clotilde's recipe for riz au lait a la framboise
as guide, finding out rice cooked in sweetened milk is a traditional," grandmotherly" dessert in France.

At least it was easy to make, not requiring special cooking equipment and a lot of sweating over woodfires, like when a bibingka or latik is cooked. It was as easy as cooking steamed rice, just pouring the milk on uncooked, washed rice in a pan and leaving it on a stove until done.

It used up a lot of milk, though. Two litse (approximately a 200 mL milk can, the traditional way of measuring rice in the country) of uncooked glutinous rice (washed and drained of water)absorbed the mixture of 750 mL non-fat milk, 500 mL evaporated milk and 200 mL condensed milk I cooked it in, and dried up real fast. I had to keep adding evaporated milk (about 400 mL more) to get the consistency I liked - sort of a creamy, viscous pudding, with a balanced solid-to-liquid ratio - and affected the taste somewhat.

For this initial trial I mixed a handful of green raisins from Iran (or Turkey, I can't remember exactly), bought at the same bazaar, to the rice before cooking, then mixed in several more handfuls once the pudding was done. The cooked raisins bloated back almost to their original selves, and it was a thrill to be crunching on fat globules bursting with juice one moment and on a wrinkled one the next. They were not so sweet, bigger than the common black and tasted fresh, and complemented the rice-and-milk pudding very well, the very slight tang keeping the sweet pudding from being cloying.

The cinnamon mixed in the pudding made it a total comfort food, great to indulge in warm during rainy or cold nights, or cold from the refrigerator for breakfast in summer. I had an issue with the ground cinnamon I used, though - I had to sprinkle a lot of it before the flavor shone through (as I liked it).

Maybe I should not have mixed it in before cooking, but to be sure I'll use cinnamon bark, which gives better flavor and aroma, the next time I cook arroz tres leches. I'm thinking of mixing in mangoes, too. Now that would truly indigenize this dish, which has earned its place in my sweet rice dishes list.

To serve, ladle the arroz tres leches into transparent little glasses, top with raisins and sprinkle with ground cinnamon, or nutmeg.

Email ThisBlogThis!Share to TwitterShare to FacebookShare to Pinterest
Labels: belas (bigas/rice), from around the world, malamis (matamis/sweet)

Mangoes sound great, but I have never heard of Green Raisins! I think I have a new thing to find and eat. Thanks!

A really interesting post - thanks for sharing it for SHF15. If I ever make it to the philippines again you are going to have to make it for me ;-)

My first time to encounter it, too, Christine!

I'll cook it for you, and many other things besides, Andrew! Do let me know!

Wow, fantastic! This is something I'd like to taste even in the heat of summer.

Actually, some recipes for calamay ube (rice-yam pudding for non-Filipinos) uses milk (either fresh, evaporated or condensed) and cheese. I think this is a fusion of the more traditional recipes and the Spanish influence. I have seen it especially in more Hispanicised towns.

how about using coconut milk, then add your mangoes.

Karen, my in-laws cook haleyang ube with cheese and condensed/evap. Maybe we indiginised the Spanish/European dessert and turned it into our more common rice puddings, using gata? Sounds logical, ain't it?

Yo, I've tried that, using gata with the rice pudding and paired with mangoes. The rice pudding's sweetness dwarfed the mangoes. Back to suman and mangoes na lang ako.

Maybe we indiginised the Spanish/European dessert and turned it into our more common rice puddings, using gata? Sounds logical, ain't it?

Logical indeed but I'd rather think of it as a 'dialogue' between two culinary traditions (just like tamales and boboto). Why? The calamay and jalea that uses milk and cheese is usually meant for special occasions like Christmas and fiestas (Hispanic/Catholic) while the everyday version is more plain and uses gata. These plain versions are also closer to other Southeast Asian recipes. Points to a pre-Hispanic tradition. But then again, I'm guessing here. Hehehe!