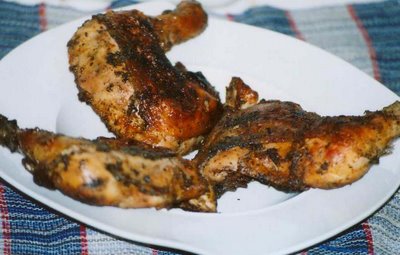 I'm having such a grand ball with the can of Old Bay Seasoning sent to me by Cathy for the BBM4 food swap. Several recipes have been printed at the back and on the side of the can, and I've already tried several, to great results.

First one is marinade for grilled chicken. A spoonfull of the seasoning, juice squeezed from a lemon, some ground pepper and salt mixed and rubbed on a pound of chicken, letting it sit for about 2 hours to a day. I used four drumsticks, included a clove of minced garlic and some crushed rosemary, omitted the pepper, and put the chicken in the freezer for a night, transferring it to the chiller for about two days. The drumsticks were then grilled over live coals. The marinade seeped in real well, and the chicken came out superlatively delicious, tender to the bite.
The smell of the grilling chicken was mouth-watering, torturing everybody in the house and all the neighbors, especially since it took two hours of constant turning to thoroughly cook it (it would have been cooked in a shorter time had I let it be and not turned it every 30 seconds or so). As the first wisp of saliva-inducing aromatic smoke wafted from the grill my three-year old was jumping up and down, screaming he wanted his chicken dinner right then and there. I thought his picky-eating stage had suddenly come to a halt. I ran out of tricks to distract him, and the waiting for the chicken became an agony. 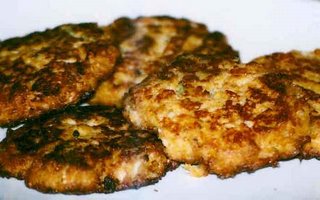 Crab cakes used a pound of crab meat, two tablespoons of mayonnaise, a teaspoon of mustard, two slices of bread (the one available in the house was whole wheat) which had been flaked without the edges, a tablespoon of the seasoning, some ground pepper, and a beaten egg. All the ingredients are mixed together, shaped into patties and shallow-fried on both sides.
I fired up the cooking oil too high, not knowing the patties would burn easily. Good thing the inside was still gooey crabby, cooked just right and still a little moist. Despite the fiasco they were still delicious, especially with some garlic mayonnaise. Next time I would like to add some minced onions, and some Tabasco sauce for a little bite.
I tried the seasoning as a rub by itself on some porkchops which were allowed to soak in the flavor for about three days in the refrigerator, then grilled. They were awesome. I'd like to try them fried, for my honey who adores fried porkchops, probably after Lent. With maybe some crushed basil, or thyme, also rubbed in.
I'm also planning some crab and corn soup, wishing I could get hold of some crab meat real soon. And for breakfast, some oeuf cocotte, with a dash of Old Bay Seasoning sprinkled on top. Probably after Lent, too, for, at the rate I'm going, it looks like I would have a lot of atonement to undergo for these indulgences just into the first week of the abstinence season.

Can I add you on my link?

Hi Kai! You won't believe this, but I've never bought any Old Bay for myself! I'm not crazy about seafood, so I never thought I needed any, but as I mentioned I have had it on fries in restaurants and I love the taste of it. That chicken sounds fantastic and may finally get me to buy some Old Bay for me!

wnhskefHi, Tin, yes I loved it! I followed Marketman's advice and put the can in the ref, so it could last a little while longer, hopefully beyond its expiration date. You're welcome to link me up, thanks!

Haha, that was funny, Cathy! I have had fries sprinkled with something tasting like Old Bay at the Fish and Co. restaurant (originated from Australia, I gather), and they were great.

The reason I thought of the chicken was because I keep seeing these cut-up chicken and porkchops at the grocery store where I shop, rubbed with what look like Old Bay. They were called lovely chicken legs and lovely porkchops. I tried them once and they were delicious. So when I saw the recipe on the can I tried it at once. Tasted really well. I'd like to try it roasted in an oven, too. After Lent, hehe.

old bay is yummy on grilled veggies too, kai. gives it a bit of a kick!

i put tabasco, mustard and lemon juice into my crab cakes. just a teeny bit of everything.

I'm very happy I came across your blog. Your entries on food are really very interesting. They're also VERY WELL WRITTEN. Do you work professionally as writer? The only other interesting food blog I know is Marketman's blog. But he writes so awkwardly I cringe at times; he's obvioulsy trying too hard to pander to a "multinational" audience and carries himself like culinary diva kahit balu-baluktot ang diction niya. So Kudos to your excellent coverage of Pinoy food, Bucaio! Keep posting. Your blog is a breath of fresh air here in New Jersey, where there are lots of Pinoys. I'll spread the word about your blog.

I'm glad I found your site. Your entries on food are really very interesting. It's also VERY WELL WRITTEN. I bet you work professionally as writer. The only other good food blog I know is Marketman's blog. But he writes so awkwardly I cringe at times because he's obvioulsy trying too hard to pander to a "multinational" audience and carries himself like prose diva kahit balu-baluktot ang diction niya. So Kudos to your excellent coverage of Pinoy food, Buciao! I hope you keep posting. Your website is like a breath of fresh air.