She Sells Seashells By the Seashore 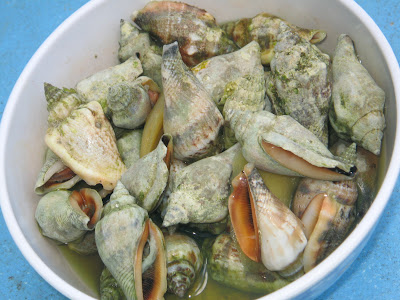 Our unplanned, though greatly anticipated (we knew the husband was going there, but didn't know when, until the afternoon before our early morning departure!) two-week vacation in Puerto Princesa meant home-cooked meals, because it would have been economically impractical - unhealthy, too - to eat out for the whole stretch.

Our accommodations included a kitchen, and though it was not fully outfitted as well as I would have liked, it sufficed for our daily meals. A member of my husband's unit that went there doubled as cook, who was also responsible for the marketing. I tagged along on his trips to the city public market to buy the family's provisions.

These jaunts were short trips, and I was always late arriving at the parking lot where our vehicle waited - I was used to taking my time going around, inspecting everything before making a purchase, and I was also used to buying a whole week's worth of food.

It turned out that the marketing chore was on a daily basis, which explained why the refrigerator was almost always empty. We were in Palawan, after all, the home of bountiful seafood delivered fresh daily.

On my first day at the market I bought everything that was unfamiliar to me, not knowing when I could be back there again. The pelagic fishes I knew, and although I was sorely tempted to buy whole ones because they were so cheap compared to Manila and Cavite (and even Pangasinan) prices, I controlled myself.

It was on the shells I concentrated on - there was plenty to tease my takaw-tingin eyes, that I stamped my feet in frustration upon learning that most of the sea creatures on sale could not be frozen, or refrigerated, but had to be cooked and eaten on that day. I bought tubs and tubs of a variety of shells that ended up dead, smelling of waste and sorrow and flooding the sink with briny water. 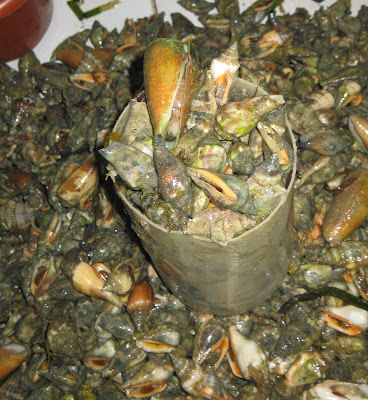 A favorite of Puerto residents is the sikad-sikad (Php30/tub), the name calling to mind pedicabs, or leg-powered tricycles (Visayan name is traysikad). These are small conches abundant in beaches in the area (but can also be found in other coastal areas across the Philippines) and feature in native seafood menus of the city's restaurants.

Sikad-sikad are quite tasty - the tastiest of the lot, evoking the flavor of crab-leg meat - but are a pain to eat. The creature that lives inside the colorful shell - sporting different designs - is pale yellow with brownish mauve edge lines, largely flat, and sport three prongs. It is very small, though, and the shell's opening quite narrow, that it is impossible to pull or suck it out.

I had to employ a large safety pin to get to the meat, first piercing it then forcefully pulling it off the shell. I got the hang of it after only a few pieces, and it became addicting. The meat was rewarding enough, and was only slightly gummy. 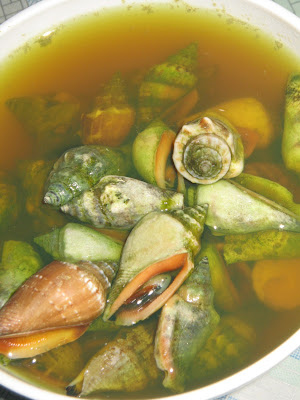 All across the country I am always told to cook shells in gata (coconut cream), and in Puerto Princesa it was no exception. I choose not to follow the advice, though, and cook shells just in gingered broth - specially when eating something new - so I could fully appreciate the flavor. Gata enhances any dish, but tends to overpower anything with subtle flavors.

In the sikad-sikad's case the gingered broth was perfect - it was naturally flavorful, lending its taste to the soup that turned yellow-orange tinged with green (probably from the lichen on the shells). I'm sure with gata it would be a rich brew. 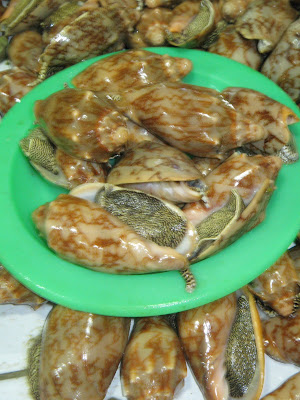 I thought these shells, called sikuray/sikuday in the Cuyo language if I remember right (Php30/saucer), were for decorative purposes only - the geometric patterns so charming and the meat prettily sporting a weave design.

They are eaten in Palawan, but the empty shells are used in native handicrafts. Even when dry they don't lose their deep hue and pattern. I've seen some empty shells being sold at souvenir shops for Php10 a piece, which made me regret throwing away the shells that I bought.

The shells and meat are bigger than the sikad-sikad, but are more chewy and bland. I think these would be ideal cooked ginataan.

There is another shell whose photo vanished into thin air, literally, along with more than a year's worth of food photos, when my laptop contracted an airborne virus. That shell is the smallest, and my favorite among all the shells I've eaten.

The shell has a silvery sheen, much like a mother-of-pearl, and spirals into a sharply pointed tip. It is sold with the tip and almost half the shell pounded off so the meat can be easily sucked out.

The Cuyo name is alimporos (Php20/tub), and the vendors told me it is called susong-dalaga in the Tagalog region. For me it was quite apparent why the shell is called thus - in the Pangasinan language alimporos means puyo (cowlick), though I couldn't properly get the question of whether it means the same thing in Cuyo across to the vendors.

It recalls a cowlick because of its spiral shape. But it recalls the other thing that it refers to in Tagalog, too, because it is a dainty little thing, pointed and upright, looking so virginal. Oh the things we call our food!

Eating alimporos is quite tricky, requiring a strategically placed tongue on the shell opening and both cheeks sucked in. Once you get the trick the tiny meat goes along in one swoop, easily because of the broken end. Alimporos is delicious, and I ate an entire bowl full of the shells plus broth, though it took me the better part of an hour.

Kumusta kala agi, and thank you for sharing the fun and the food you we're able to taste while on vacation. As if I could almost taste the subject as you have describe it in your blog. I wander is it even close to bisukol or alereg? And you're probably right you shouldn't have to add gata ng niyog. Did you ever try cooking any seashell, bisukol or alereg with bulong na agdao in ginger broth along w/sabaw na bagoong monamon? You should try it's quite interesting. Although you can't quite beat the taste of ginatan suso with gabi or talbos ng sitaw. Whew it's almost lunch time here at work here is SF/Bay Area and man you are just making crave, it feels like I'm naglilihi, teka muna buntis ba ako? Hindi naman kaya lang malaki ang tiyan ko dahil sa beer. LOL

I will try your seashell recipe, it sounds interesting, especially with agdao and monamon, when I get a chance to have bisukol/alireg. Apasal ak ed sinabawan ed salumagi. Thank you very much!

I've tried the common black ones with gata and talbos kangkong and they were good.

Hi, RJ. Congrats on being a Thomasian. I hope you find the time for singing, UST Chorale is one of the most respected choirs in the country.