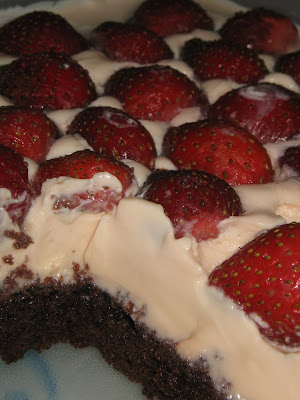 Fresh strawberries being sold along the streets of Baguio before the new year had the tag price of about P100 per kilo, on average. On the day the family was to go back down to the lowlands, we spent the morning lounging in Burnham Park, in one of our picnics, and fruit vendors were going around loaded with basket trays on their heads.

One such vendor approached me, carrying these incredibly gorgeous, large red and extremely fragrant strawberries of the Shoga variety. But I waved her off when she said they cost P130 a kilo. I said I'd buy if she would give it at P100, but she retorted I wouldn't find any strawberries at that price that day.

She went back to me after a round or so of the park, I guess, and was giving it at P120. I should have realized it was already a steal and should have bought 5 kilos right then and there, considering we haven't had fresh Baguio strawberries in almost two years, more so the Japanese kind. But the stingy me prevailed and thought I could still scour the streets for something cheaper.

It turns out we didn't have the time, not even for my mandatory foray into the market for vegetables (fresh shiitake, button and oyster mushrooms, asparagus, kuchay flowers, broccoli, kailan leaves...those in Metro Manila groceries don't taste as good). We had no choice but to stop by the stands along Kennon Road, and bite the gauntlet.

At those stands, already some 8 kilometers out of Baguio City, there were strawberries in boxes, but only in small to medium sizes. And when I asked, they were going at P160. I felt painful tugs at the pit of my stomach, as I haggled to no avail. So I had them weighed, which elicited weird looks from the vendors. The boxes weighed about 800 grams, so I asked how much is per box.

Again they raised their eyebrows and said P160. I pointed out that each box has only 800 grams of strawberries. They must have thought this is one dense girl, as they replied that the price per kilo was P200.

Of course it is standard practice that when you ask, the price quoted is by the kilo, not by the box. But never mind that I looked foolish, as I already felt like hitting my head with a shovel by then.

The only strawberries I could buy, after almost two years, were of inferior quality, and they were more expensive by 67% than those luscious looking large ones I had forgone at Burnham Park.

But enough of my heehawing, strawberries are strawberries, and the ones I bought (just 2 kilos, and paid with a heavy, reluctant heart) were good enough, particularly since I didn't have better ones to compare them to.

We ate them fresh and simply, by themselves, for breakfast. But any trip out of the mountains causes strawberries bruises, which quickly fester into pus-filled black cavities.

So I had to make use of half of my stash fast. Shakes were out of the question, as mists surrounded the fields mornings and twilights, resulting in chilly days perfect for sleeping in.

When I was still single, my friends and I went on bonding trips to Baguio, cooking and chilling out, literally, in a house on Gibraltar road, and we made floats or refrigerated layered desserts using strawberries. Our favorite then was a two- or three-layered affair using crushed, chicken-flavored Sunflower crackers, and sweetened cream.

It was delectable, the saltiness and flavor of the crackers pairing well with the strawberries. This is very Filipino, having sour fruits with salt - lots of it. The saltiness also cut through the sweet cream of the dessert.

But this time I wanted to make use of the excess chocolate cake unbelievably languishing in the refrigerator due to chocolate satiety. Plus, the only cream available in the groceries after Christmas were of the strawberry-flavored kind.

It was easy to imagine these three together - and they resulted in an impressive dessert. Simple, but strikingly pleasing, and incredibly easy to assemble. A thick layer of the chocolate cake (preferably dark/bitter sweet) as the bottom "crust," an equally thick spread of strawberry-flavored cream sweetened a little with condensed milk and blitzed with fresh strawberries, then topped with fresh strawberries, half-submerged in the cream.

I only made one layer, deciding that a two- or three-layered dessert would be messier to dig in. Nestle's strawberry-flavored cream was not as runny as the all-purpose one, and it resulted in a lusciously thick filling. I mixed in half a bottle of cream cheese spread, which further thickened it, to the point of being almost "chewy" when chilled. My sister-in-law said it was like ice cream - in fact, it was better than any strawberry ice cream I've had, due to its thickness.

The trio of chocolate, cream and strawberries were made for one another. They were perfect together - the bittersweet chocolate and the sweet cream with salty hints from the cream cheese served to bring out the sweet-tartness of the strawberries, enhancing their fruitiness. I couldn't have had strawberries any better, even in any shortcake.

The only thing that could improve this, I imagine, is using a flourless bittersweet chocolate cake, which I vow to make as soon strawberries are in their peak.
Related Post
Choco-Mango Float
Crema de Fruta

Kalad, remember when you had allergies from feasting on those strawberries. Go easy on them.

That was at Trinidad (at the pick-your-own-strawberries) where I ate them straight from the fields, without washing. It must have been the pesticides sprayed on the plants. Lesson - never eat fresh strawberries without washing them ;-)