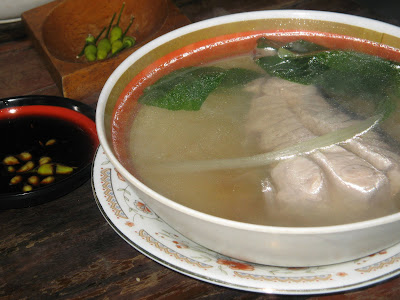 I was in Tacloban City, in the province of Leyte, for two days, and I found it strange to be imbibing soup for breakfast.

I commonly have soup for breakfast, yes, but my breakfast soups are mainly meat soups - broths made from boiling bony meats, added with macaroni pasta (for chicken soup) or noodles. These are usually thick or thickish and carbohydrate-laden, a meal in itself.

The soup I had in Tacloban is made by briefly boiling fish head or belly in water seasoned with ginger, leeks, salt, with choice young leaves. It is eaten with rice. I found it strange because I am not used to having fish soup for breakfast, though I certainly have fish soup for lunch or dinner almost every day.

In Tacloban, and I gather in most places around the Visayas and Mindanao, it is available from morning til night. This soup is called tola in the local language, probably the Waray equivalent of towa in Cebuano/Bisaya, a contracted form of tinola/tinowa. Tinola/tinowa is the middle syllable "to" in the holy trinity of Visayan cuisine - sutokil, or STK, short for sugba-towa-kilawin. Sugba is grilled, tinola/tinowa is boiled, kilawin is marinated in a ceviche.

This triumvirate is fare that best represents the food landscape in the archipelago - the freshest marine catch prepared simply, cooked with very few other ingredients and minimally seasoned, just to enhance the subtle flavors of the bounty of the sea.

But tola/towa, actually, would be found quite, uh, uncommon by people who grew up in the island of Luzon, as I did. It is described as a cross between a tinola and a sinigang, the former being chicken boiled with ginger and salt, while the latter is soured soup. Towa is somewhere in the middle because it is not sour enough to be considered a sinigang, but it cannot be considered a "regular" tinola either because of the tomatoes, which imparts a hint, though, very mildly, of sourness.

The first time I actually had towa was in the island of Lubang, where I ended up after a tumultous overnight crossing of the shark-infested Batangas Strait in a lantsa (a big outriggered boat). It was the worst trip ever for me, on land or water, but I forgot about it with a hot sip of towa - made with small danggit (rabbitfish), fished a few minutes before, and kamote tops - that welcomed me.

But we landlubbers are used to soups that are either just gingery, or a soup whose sourness is pronounced. In Pangasinan we use tomatoes as the sole souring ingredient in a sinigang when cooking small, delicately flavored fish, but the tomatoes are boiled to the point where they have turned quite soft and almost mushy, so that they have infused the soup and sourness is very much present.

In Tacloban, though, the tola is just gingery, boiled without the tomatoes. And I found it addicting. Tola is refreshing and envigorating, light enough for morning fare. Now I understand why office colleagues in the Visayas who spent three months in Makati always felt overjoyed every time they found a restaurant serving hot soups.

I think there is an equivalent soup in the Tagalog region/area, called pinatisan, which is fish boiled in broth flavored with ginger and patis (the Filipino equivalent of the Vietnamese nuoc mam or the Thai fish sauce). We cook tilapia this way.

But the Tacloban version uses the deep sea giant fish momsa or mamsa (talakitok, trevally jack), which has enough fat to make the soup flavorful. Healthy fat, that is. A large kaldero of tola would be be perennially atop a stove by the entrance to the restaurant we frequented, and lifting the lid the smell of ginger mingled with the hissing steam that escaped from the pot. 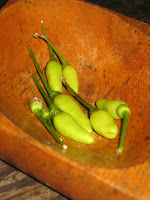 An accompanying dip is a dollop of soy sauce, a squeeze of kalamansi, a splash of vinegar, mixed all together with the well-known fiery Waray tiny green chili pepper halang-halang, crushed to your preferred level of heat. This is spooned over the fish as it is eaten with rice.

I love mamsa tola, and it is now the tola for me. The restaurant in Tacloban, Ambo's Place, occupying the ground floor of the Comelec regional office, is actually enamored of mamsa, serving only the fish. Besides the tola, I got to try mamsa cooked variously - fried, en tocho (seared and stewed in tomatoes and salted black beans), curried, sweet and sour, coated in mayonnaise and red bell pepper.

Again it was the tola that made a lasting impression, so that on my way to that airport going back to Manila I had to ask to be dropped by the wet market, and bought an entire mamsa to take home to cook.