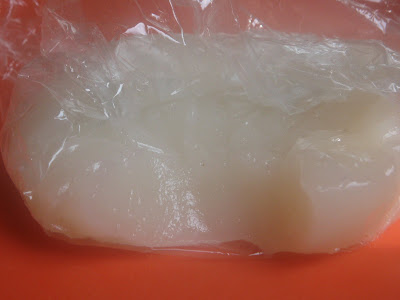 Kulambo is Pangasinan-speak for tikoy, the soft, sticky snack made by mixing ground glutinous rice with sugar and water. I don’t know why it is called thus – the Tagalogs refer to kulambo as that netting put atop your bed to ward off mosquitoes as you sleep at night, which we in Pangasinan call, aptly, mosquitero/moskitero.

As much as the name is a curiosity, this tikoy is also distinct among all tikoys out there, even the pedigreed tikoys from China and Japan and wherelse, or at least those that I’ve come to know. There’s the Chinese New Year tikoy, which is like hardened paste (the school-age glue made from cornstarch) and requires a coat of beaten eggs before deep frying to render it edible. And the common Chinese tikoy roll encasing a filling of mashed kamote (sweet potato). And the Japanese mochi which are similarly filled but come in the shape of balls.

The only other Filipino tikoy I know, actually, is the Quezon tikoy, which I love and tried to replicate, and which I’m not even sure is also called tikoy. But whereas the Chinese and Japanese tikoy are almost translucently white, the Quezon tikoy is deep yellow from the addition of eggs and milk.

So kulambo is more Chinese, and Japanese, than Filipino. Its consistency and texture is like that of the Chinese New Year tikoy when melted from the frying, and is much the same as the common tikoy roll and the mochi, without the filling. It is sweet, and sticky, and smooth if made properly.

I don’t come across tikoy much like it across the Philippines, so that I find myself yearning for kulambo when I’m away from Pangasinan for long stretches of time.

Which is not a problem, since kulambo is not associated with any festivity, so is available year-round, found at the sections of Pangasinan public markets where rice delicacies are sold, displayed alongside puto, patopat, latik, suman, and in the kiosks selling puto in Calasiao. So I gorge on kulambo everytime I go home, as I invariably hit the markets and the puto kiosks in Calasiao.

But really, gorging is an exaggeration. I could only ever finish a small piece (about 3” in diameter, used to be sold for years at Php5), and no matter how much I want to eat more I couldn’t. Once I’ve finished one it feels in my stomach like it had coagulated all into one whole piece again, then absorbed all the liquids inside of me so that it sits there bloated and heavy, pressing on all my intestines.

And so because I could only eat so much at any one time I could never get enough of it. I dream of it, and dream of making it, and hoard it when I’m home, only to find molds on them days later because I and the kids could not finish all that I’ve bought.

So I don’t find it strange to be writing about kulambo right smack at the start of the year. Because it is shaped into fat little disks, and is sticky, it always has its special place on the media noche table on New Year’s eve. It was the only manageable thing I could come up with, anyway, besides the puto. It was such an irritating experience shopping for a media noche feast when members of the household (not my own – we usually spend the holidays with kin) protested every little item I wanted to buy (no crabs, you’d be crawling for the rest of the year, no squid, it portends year-round darkness, etc., etc.), especially since nobody ever eats after all the fireworks. I've started hating those fortune tellers who feel they have the authority to dictate what people have to put on the table on New Year.

But as a side note, I’m glad that I can’t eat as much kulambo as I want to. Apart from not imbibing a lot of its superstitiously beneficial properties, I’m wary about absorbing any BPA or whatever it is in that soft, sweet delicacy. For kulambo is made this way – mix the three ingredients, shape into flat balls, insert into individual plastic bags, then dump the plastic bags in boiling water until done. A sort of sous vide, but I’m sure the water temperature is not as low. And even if it were, it’s still cooking in plastic. I don’t know how it was made before the advent of plastic bags, but for sure the plastic is for convenience – it makes for an efficient process selling something in what it was cooked in.

I should probably try making kulambo in a cake pan and steam it, like how I cook my other tikoy. It's bound to be too sticky and would probably make a mess, but it does not matter, since Chinese New Year is just around the corner.

it's good that you're back! hope everything's okay.

You're missed. Good to hear from you. Looks like kulambo is a 1-2-3 type of kakanin dessert. Take the sweet rice to wet market for grinding mix it with sugar and keep it a plastic bag to cook. Like palitaw except the fundamental cooking is steaming method. China is one of the progressive country now and they are leading industrialist but most of her citizens believe in auspicious food which is part of their culture and they take that culture with them everywhere they go and passed on to their next generation.

Thanks. I don't know why, the time nowadays just sort of run by. I had just celebrated two birthdays in the family, then anticipated Undas, and next thing I knew Christmas had wheezed by, another family birthday, and now it's nearing summer!

Yes, the Chinese bring along their culture wherever they go, while Filipinos adapt and adopt. That's why I struggle to keep this blog up, and part of it also is I hope that in the future my kids find it. I try to cook Pangasinan food in Cavite as much as possible, and yes, even the plastic-clad kulambo.

I am craving "Kulambo." I remember my grandma used to make kulambo but unfortunately no one in the family now knows how to prepare it, a perfect example on how Filipinos lose part of their culture. Haven't been to the Philippines for a long while and I truly miss the "kulambo."

This sounds so familiar. I know I probably had it when I was young in Manila. It sounds so good. Tita Roz-