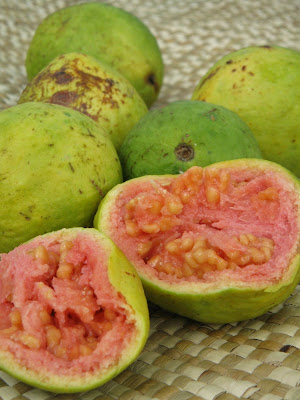 The blazing hot Philippine summer season means it’s tangay-tangay time. In the Pangasinan language, tangay-tangay describes people – children and adults alike – who are always looking up towards the heavens.

And that is because during the sultry months, most trees teem with fruit, branches laden with so much that they are almost perpendicular to the ground, and one ripe fruit is bound to slide down straight to your mouth if you open it wide while looking up.

I have fond summer memories of going around with a gang of friends raiding the neighborhood guava trees, leaving them bereft of fruits, which we collected in our upturned shirt hems that inevitably got stained.

Somebody invariably always brought a packet of rock salt, and we just wiped the guavas on our shirts to remove the accumulated dust, dipped them on the salt, and bit on them right there under the guava tree.

We bit on the fruit in a circular fashion – going around the fruit, not through it, to avoid the core of tightly packed seeds. Or maybe it was just me, because I didn’t like eating the seeds (they came out of me the next day still whole).

The guavas of my childhood are small, round with dark green skin, which turn pale and tawny as they ripen. The flesh is white when unripe, and an opaque yellow when ripe. We always picked and ate them hard and unripe – they had that characteristic sour apple taste then, but not acidic.

The skin was bitter, but we didn’t mind because they were always very thin. We didn’t like the sweetish taste of them when they turned soft, and there was always the risk of biting into a fruit full of worms.

The pink ones are rare. These are bigger guavas, the skin lighter green, the flesh yellowish when unripe but turn into a lovely coral-pink shade when soft and ripe. My kids rather like the fragrant ripe fruits, which I get hard and unripe, letting them ripen on the kitchen counter.

Guavas are not really high-value fruit in these parts, despite their being touted as superfruits because of their being chockfull of vitamins, minerals, carotenoids and polyphenols. They sprout, bear fruits, which are harvested by the entire neighborhood, and then left on their own until the next harvest. Which explains why we didn’t even bother to wash them when I was a child. Guavas weren’t acquainted with harmful chemical sprays. I hope that is still true today.

Several trees in the backyard would spell a surfeit that would litter the ground and perfume the air, which might turn unpleasant with the heat. So some people end up selling some guavas at the market. But the price is always pamigay - so low it’s tantamount to giving the fruits away. 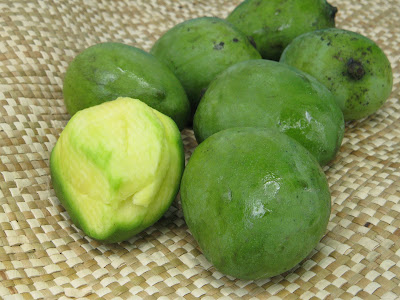 These mangoes are called pao in the Pangasinan language, or pajo somewhere else, accent on the last syllable, so it is sometimes mistaken as referring to a sensitive female body part.

These mangoes are also eaten maeta – unripe, the younger, more immature, the better. I even pick out those whose seeds are still bald and bereft of those strands of fiber that develop as the fruit matures. The undeveloped seeds are still very small, ensconced in a thin, tender white shell, so I get more of the tinglingly sour flesh, and I don’t get pesky fiber tangled in-between my teeth.

Unripe pao is crisp, with a slight sourness but not in a forward manner, like apple that’s not sweet but not sour either. It is a few centuries removed from the blasting tartness of carabao mangoes. So even though unripe carabao mangoes are also eaten (to get a kick), it is a more agreeable experience for the teeth to eat unripe pao.

Like eating apple mango, too, sometimes called Indian mango, which are bigger but also heart-shaped. Apple mangoes have paler skin, with a blush of pink.

Accompaniment is a simple saucer of salt, which can be mixed with crushed siling labuyo so to tease the sweltering summer, or even a few drops of vinegar to amp the sourness a notch.

We don’t eat ripe pao either. Or apple mangoes. They both develop a medicinal taste that’s repulsive when ripe. They sweeten a bit, yes, but medicinally sweet. 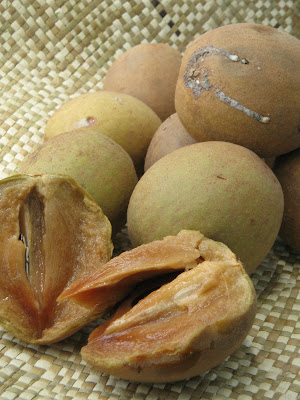 Chicos are so sugary sweet I’m afraid to give them to diabetics. The grainy texture of the flesh lets me imagine that it’s made of brown sugar crystals. Even though they are harvested still unripe they ripen to an indomitable candy sugariness.

They cannot remain long on the tree, for once they soften the birds will go crazy and peck on each and every one of them. So the unripe fruits are harvested once mature, scrubbed of the sap in water, then left to dry. After a few days the fruit will be soft and ready to eat.

They should be soft, but not yieldingly so. A small pressure applied to the middle of the fruit will halve it, and so the chico feast commences. We scrape the flesh to the thin skin. When I was a child we were made to eat the skin, washed of course, because the elders harvested our chico bounty from our own trees.

Fruits that feel bloated to the touch are already over-ripe and have started to rot, tasting sour. Having too many rotten chicos is always a problem in our house because they proceed to ripen all at once, and it’s difficult to keep up because you can only eat that many chicos.

Their sugary nature prohibits one from indulging – it gets cloying because the sweetness is so straightforward. I can’t make them into something else – the distinct chico taste disappears once it is mixed with other ingredients.

Oh,I miss those tropical fruits since I can hardly find it here in Cali. The texture of grainy chicos and the sweet aroma of guavas are deliciously insane.Yummy!