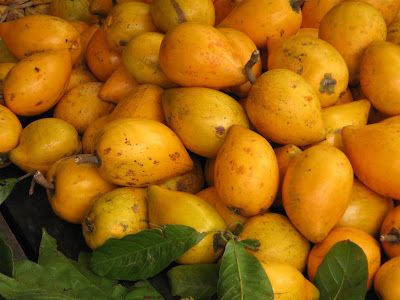 I had thought chiesa have gone extinct. I had them intermittently as a child, because our next-door neighbor, a grand-aunt, had a tree in her backyard and we had unlimited access to it.

Not that I would go out of my way to climb the tree and harvest the fruits. I didn't like chiesa (chesa, tisa, canistel) as a child - the texture was like eating wet chalk, the sweetness not as pronounced as other fruits, and it had a funky, musky edge to its taste. I never saw any at the public market, and we didn't seek chiesa out - I never missed it when it didn't appear for long periods of time.

But I ate it - I was forced to eat it, more like. Children were told that since chiesa (Pouteria campechiana Baehni) has a deep yellow hue, it is rich in Vitamin A - very, very good for the eyes. 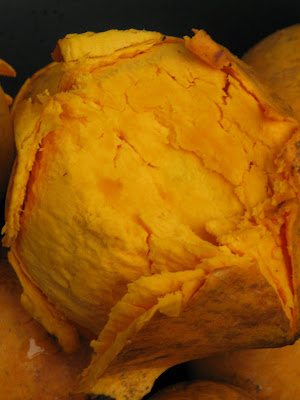 For a long time I haven't come across the fruit, but when we moved to Cavite I would sporadically see a vendor or two selling chiesa at the public market. This was like a few weeks in a year, and there weren't many of them - just several tumpok or mound of five small fruits, like the vendor had a tree and was just selling the surplus.

This year it started out like that, a basket or so appearing tentatively. The fruits were so mature and looked like they ripened on the tree - the smooth thin skins had burst seams showing the yellow flesh within.

But three weeks into chiesa season I suddenly find several tables groaning with the fruit. They were small, and still hard, so they had been harvested unripe. 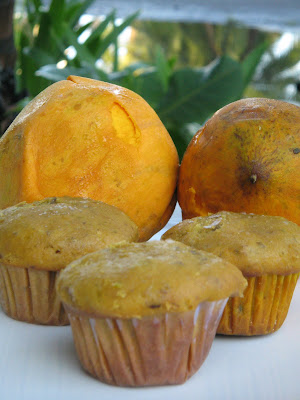 Like me, my children don't fancy eating chiesa. The youngest could finish a big fruit when spooned to her at intervals throughout the entire morning.

I've been looking for ways to incorporate the fruit into things the kids would eat - a shake is a no brainer, but it hasn't become in demand yet in our household. I've tried muffins, adding ground pistacchio, and they were okay, and I've enriched baked donuts, too, with mashed chiesa, replacing the required butter with it. I was thinking of mixing it with puto, but was afraid the flavor would be more prominent than I would have liked, though perhaps the color would be stunning.

I read that chiesa was among the benefits we got from the Galleon Trade, coming here from South America. In its home country it is rarely eaten fresh, but ground into a powder and used as flavoring for milk, custard and ice cream. 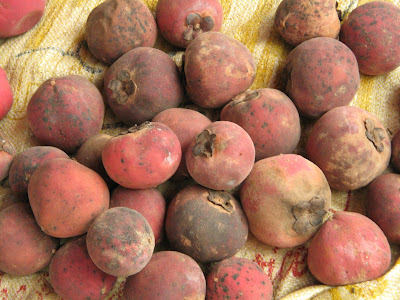 Mabolo also left an indelible mark in my childhood. For in the public elementary school I attended there were more mabolo trees than there were buildings.

During the rainy season the trees would pelt the school grounds with ripe fruits, which would proceed to perfume the surroundings with their heady, sweetish scent. We didn't eat the fallen fruits, as they might have been full of worms, and we couldn't get to them before they ripened, because the trees were so tall and bereft of lower branches that might have aided a child in climbing up. 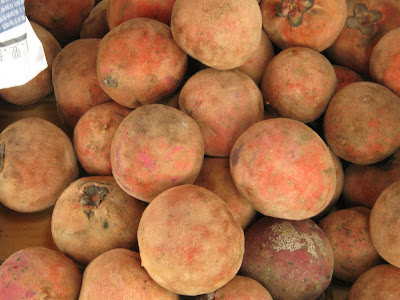 Nobody dared admit having mabolo as a favorite fruit. It was reputed to powerfully induce flatulence, so we kids never let anybody see us holding a fruit. 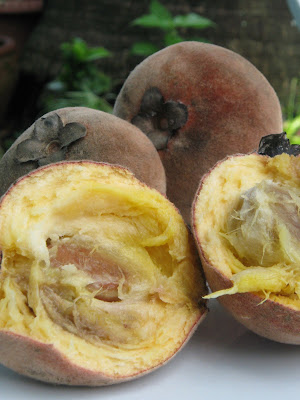 But mabolo (Diospyros blancoi A. DC.) doesn't taste disagreeable. If not for the powerful smell, I think the fruit is okay. It's actually reminiscent of a good, ripe peach, though the flesh is more fibrous, and with a slight tang like a nectarine. 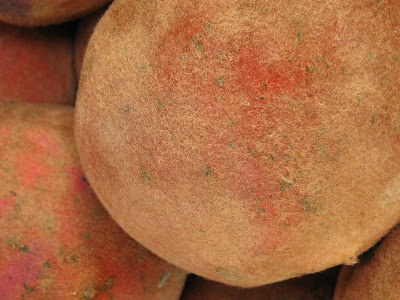 The mabolo I found at the Cavite market had rough tufts of fuzz covering the fruit. I seem to remember that the mabolo in my hometown had a finer fuzz. 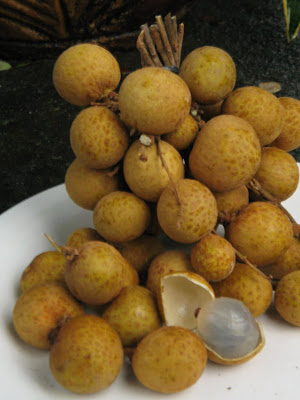 Longan appear at the same time as lychees do. But I never mistake one for the other.

In the first place, though they look alike, lychees are unmistakeably scarlet, while longans are nondescript tawny. And in taste, lychees are superior to longans.

In fact, the first time I tried longan a few years ago, I was so disgusted - it had a tinny taste like it had been canned - that I never bought some again. But longan season apparently extends beyond lychee season. Lychees have long been gone, but longans continue to appear at the markets.

Longans (dragons' eye or dragons, eyeball, Dimocarpus longan Lour.), like lychees, are imported from China. My suki fruit vendor says they can be propagated easily - just scatter the seeds and they will sprout without any assistance. Perhaps the fruits appearing this late are from locally grown trees. 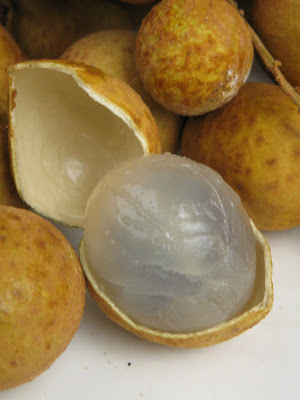 One time I was whining that the fruit choices at the market were abysmal, and a fruit vendor gave me longan to try. I told her off, saying I didn't like the taste, but she persisted, saying it was very sweet.

I accepted a piece, and sure enough it was so sweet, and had none of the tinny taste. So I bought half a kilo for the kids to try, and it was demolished as soon as the fruits landed on the dining table.

My children like longan because they're easy to peel, the seeds detached from the pulp so it's convenient to spit out. And the sweetness factor is also a main reason. I am not enamored of it - it is so straightforward sweet, not fruity sweet with hints of tang. But I buy longan for the kids. So more lychees for me.

Where in Cavite are you from? I grew up eating all those fruits too. Santol was my favorite.

i love your blog. chiesa and mabolo - where else can one find pictures and wonderful stories about these exotic, hard to find fruits? and all those varieties of fish in season?

Hi, Inna, I grew up in Pangasinan, but I found these fruits at the Cavite City public market.

Hi, Lou, thanks for always being so generous with your blog-love. ;-)

haven't had tiesa in decades. apparently i loved this when i was a toddler, but grew to kinda hate it when i was older. I wonder if i would like them now but not sure if i would be able to find them in Davao