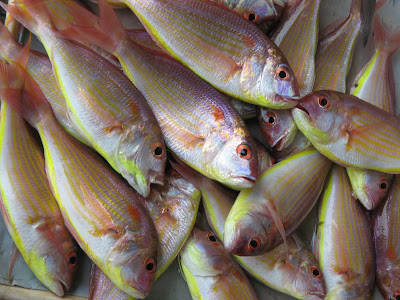 Generally speaking, edible Philippine marine and fresh fish run the gamut of grayscale, including the tints and shades in-between, interweaving with hues of brown. Which goes to say those colorful tropical reef fish are for snorkeling purposes only, more or less.

But there are exceptions of course – large pelagic fish like red snapper (maya-maya), red grouper (lapu-lapu), parrotfish (loro) and golden dorado or dolphinfish are all a-glitter with color, adorning not only the deep but are also prized centerpieces during feasts. I must note, though, that the brown/black-spotted grouper is more expensive because its flesh is tastier than its more colorful counterpart.

But on a day-to-day basis, some more common, and more accessible, fish add color to the otherwise mundane things at the wet market. Bisugo (threadfin bream) is available year-round in Cavite, always still glisteningly-red with yellow streaks, the sliminess proof that they had just been gathered from the waters surrounding the city. Which is critical, because bisugo does not keep well.

But fresh, it is awesome in a simple sinigang, the broth soured with just tomatoes, spiced by onions and siling haba, and perhaps fortified with kamote tops or kangkong. The fish is cooked briefly so the delicate, flavorful flesh remains firm, but even with just a minute of simmering it renders its fat, enriching the broth.

It is also exquisite in a paksiw – quickly poached in boiled vinegar, garlic, peppercorns and siling haba, to be eaten the next day so the fish had time to absorb the stewing liquid. A superlative countryside, rainy day breakfast comprises paksiw na bisugo eaten with garlic fried rice, perhaps with a salad of sliced salted duck eggs and fresh tomatoes on the side, maybe even with tortang talong – peeled roasted eggplants in scrambled eggs. Such a meal would make you feel that life is good, and everything is all right with the world, even with torrential rains pounding on your roof.

There are not a lot of bisugo being sold on any day, though. Just a platter here, or a couple there, and only about three vendors sell the fish at any one time. And the specimens are rather small, averaging four-five inches in length. I have yet to come across a size that I would like to buy, because bisugo are spiny, and small ones are not wise to serve to children.

The price is stable year-round, around Php200 per kilo, which is towards the high end of the spectrum – it’s more expensive than chicken and pork, and at least double the price of the more common gray fishes. 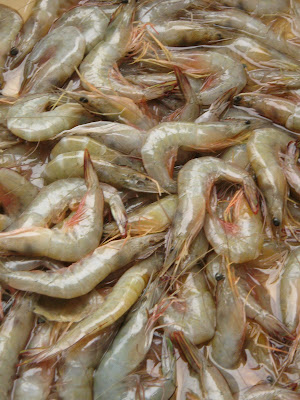 Wild white shrimps from the sea are abundant at this time of the year. They are caught in the waters of the three bays around Cavite by local fishermen, and thus available year-round, but their sheer number this season have driven prices down. We have been feasting on Php200/kilo white shrimps for weeks now, bought from boat-owners who sell their own catch (sariling huli), so the prices are not inflated with mark-ups by vendors.

These shrimps are subtly sweet and tender, the shell turning the palest of orange (or s-peach, as my youngest is wont to mangle her colors) when cooked. My husband likes them simple – halabos, steamed then salted when almost cooked.

I was never fond of shrimps, mainly due to the drudgery of having to shell them while the rice turns cold. So it was just my luck that all three of my kids took after their father and adore shrimps, and I find it ironic to be shelling tons for them weekly.

Sometimes I ask the househelp to shell the shrimps fresh, to be sautéed with whatever vegetables had appeared that week – chicharo, broccoli, cauliflower, mixed with young corn and carrots. We keep the shells and heads in the freezer, to be pounded in a mortar and used as flavoring for sotanghon soup on subsequent days. I freeze even the shells and heads from halabos, for they greatly enhance misua with boiled quail eggs.

We usually demolish a kilo of shrimps in one meal, but I usually buy more, to be added to fish sinigang that turns sweetish with it and a slice or two of celery stalk. 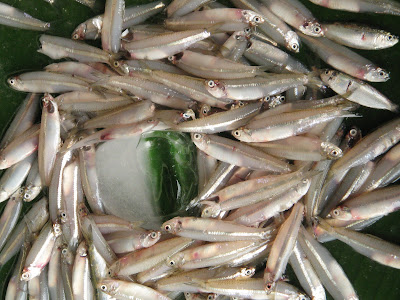 I usually buy some of these small, narrow fish when I chance upon them at the market. They are slightly bigger than dilis (anchovies), more rounded, and more translucent, giving the appearance that they are white. Only a couple of vendors offer these fish, and they tell me they are called tuako, the older and fatter siblings of dilis.

Whole tuako sell for Php25 for a quarter of a kilo, but beheaded ones are often available, though with a Php5 premium. Sometimes I am able to chance upon filleted tuako, which make for spectacular fish nuggets dredged in seasoned flour and pan-fried. I’m told in Cavite the fillets are eaten in a kinilaw, marinated for a short while in raw vinegar, kalamansi juice, garlic, ginger and onions.

The intact ones are just as awesome fried individually, turning to a crisp so that the heads are eaten as well. Tuako do not have the intense umami-ness of anchovies, but they are delicious in their own right. 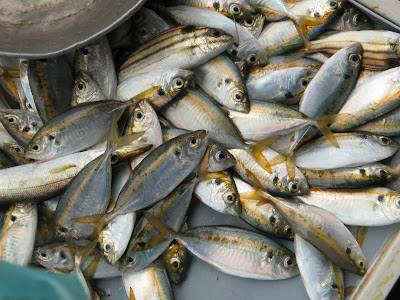 Salay-ginto are differentiated from salay-salay because of the narrow swath of gold running the breadth of their small bodies, diesscting their middles.

I think salay-ginto exist to prove that the adage small but terrible is true. They are extremely flavorful, whether simply fried for breakfast or sinabawan (cooked in broth) with tomatoes. And, they don't sell for their equal amount in gold. They can be pricey, yes, but with their size half a kilo is a lot for one meal.