Balatong, or munggo/monggo, and called mung beans in English, is considered poor man's fare because it expands when cooked, so that a cup of dried beans at Php20 can feed a household of more than ten.  It's very filling, and because it's a legume, it's very nutritious and protein-packed.

I'm not sure how balatong is related to lentils (dhal), or if they are one and the same, but they certainly look the and taste like two peas (or beans!) in a pod. The only difference is that monggo is sold whole while dhal beans are halved/split, and dhal costs ten times more hereabouts.

I grew up eating balatong - boiled until soft and almost mushy, flavored with bagoong, made much more substantial with chopped ampalaya and malunggay leaves, and sauteed with garlic, onions and lots of sliced tomatoes when cooked. We'd usually have grilled fish on the side, so we didn't put pork (normally the fatty cuts) in our balatong like many Filipino households do.

It was only recently, though, that I became picky in the beans I buy. I choose the kind with a sort of white fuzz covering the beans, which make them look kind of dusty. The vendor at the public market in my hometown told me that variety is antigo, which literally translates to "antiquated," but more like "ancient." In culinary/biological terms I think she meant it as "heirloom." Another, younger vendor said this variety is called kasube. These heirloom beans make for a thick stew, mapalet - mapal-palet - or malapot as also preferred in Tagalog country.

I've grown to love the beans. I used to eat bowls of it, and I still do. I now venture into putting other green leafy vegetables in it, like spinach, and even baeg, or sigarillas. While I can't remember how often we had it in my family, I make sure in my household we have beans - balatong, alternating with black beans and white beans - at least once a week.

We were not particular about what day of the week we had balatong, but it surprised me to discover that in Manila and thereabouts, monggo is served only on Fridays. In various canteens I've toured, a cursory check at kiosks serving turo-turo food, even the plastic-bagged cooked food sold along pedestrian routes and MRT stations - it never fails that monggo appears on Fridays.

I guess this is a hold-over from having monggo on the Fridays of the Lenten season, when Catholics practiced abstinence from eating meat. People were so dedicated that they carried over the abstinence throughout the rest of the year. 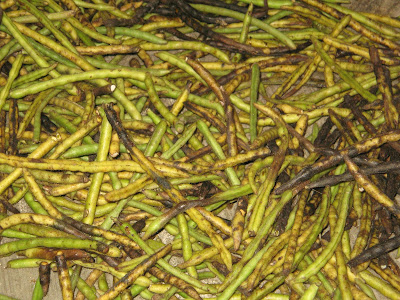 In Pangasinan, we eat balatong in at least three of its growth stages. Balatong, the dried kind. At the onset of summer, we harvest the young pods, and eat them along with the fresh young beans popped from slightly more mature utong. These are tender beans that take less time to cook, and have the fresh, dewy taste of newly-gathered vegetables. 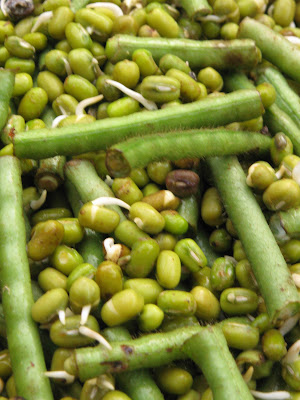 These beans, along with the pods, are called agor.  I am told agor is the general term in Pangasinan for anything young, or immature, vegetable fruit. So there can be an agor of  malunggay pods. But agor generally refers to the young balatong pods and fresh beans, and when you look for agor in my hometown public market you'd be presented with sacks of newly-gathered young balatong for popping, or wait for the tia to pop a can's worth of fresh beans. 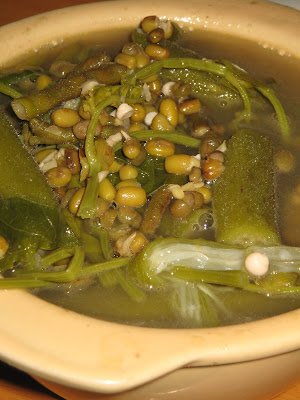 The agor is cooked the same as the dried monggo beans, sinagsagan with bagoong, with other vegetables of choice. Agor doesn't expand as much, though, and cooks far before the point of mushiness, so that the dish is soupy. Other "chunky" kinds of vegetables are added, like okra, or baktaw, and even bunga'y lakamas and bunga'y marunggay.

Because agor is young and still full of moisture, just a couple of days in the refrigerator will result to "tails " coming out of the beans. Everybody who has attended preschool and grade school knows this is a precursor to having sprouts growing out of your bottled dampened cotton. Adults know it is a prelude to having togue. 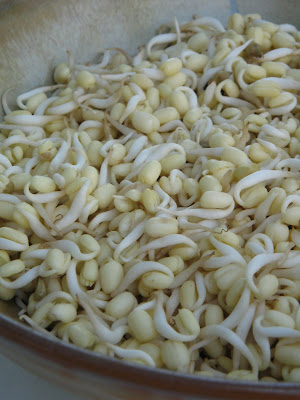 In Pangasinan we generally don't wait that long. As soon as that tail lengthens to more than a centimeter and the skin loosens up, we shake the beans and throw out the chaff, then cook and eat them, much like the more-advanced-in growth togue, sauteed with Chinese pechay and julienned carrots, salted. Crunchy and a bit sweet, it also pairs well with cubes of fried tofu.

We called these impabasik, and I couldn't find monggo in this stage in Manila when I grew up. There  was actually no togue  in my hometown when I was a child, but we had lots of impabasik. So I never knew lumpiang togue. We probably had lumpiang impabasik.

I think dal or Dhal refers to lentils. They have a more flattened appearance although they are similar in size to monggo.
I use any vegetable available to top the ginisang monggo. Thus, himbabao, malunggay, camote, alogbate, pechay, sigarillas, etc etc, although my personal favorite is ampalaya leaves.
Balatong to us Visayans refer to an entirely different kind of beans.

how wonderful to learn about all the local names of monggo in their different stages of growth, as well as the various ways of preparation. this blog may someday be a treasure trove for culinary anthropologists.

Hello Kai, Dhal to Hindus are called pulses. These are dried beans, lentils or peas that have their hulls removed and more often halved. Monggo is called mung dhal. Now I am hungry.

Yes, Dr. Magsasaka, I was referring to lentils. Curiously the term dhal was what stuck to me and I couldn't recall the name lentils. Must be a case of over-fasting and abstinence. ;-) Oh yeah when I'm in Cebu I get confused sometimes, thinking balatong is monggo hehehe.

Hi Flipster, ah now I get it. So it's generally referred to with the qualifier mung then.

funny, but my youngest who was born in america, loves balatong cooked the simple way, with bits of pork and spinach. i guess deep inside he is a taga-uma at heart.

Hahaha! Haven't heard that phrase "taga-uma" in a long time! Being snobbish teens we'd use it in a derogatory way. Now I'm wiser, and I know the "taga-uma" lifestyle is healthier. Cheers to your son, and may he may remain "taga-uma" at heart!