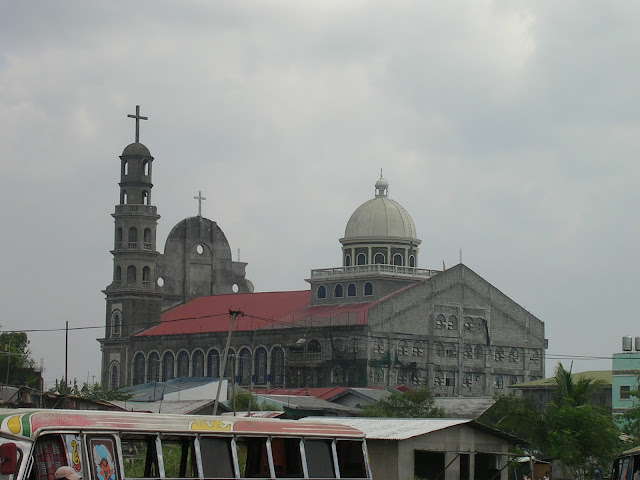 San Roque Church
(Nuestra Senora Soledad de Porta Vaga Shrine)
Burgos Avenue, Cavite City
The San Roque church is a work in progress. The outer walls' stained glass windows have just recently been unveiled. The church was established more than three hundred years ago and has undergone numerous renovations and refurbishings since then. Its facade and bell tower can be seen from many points along the way on the road to the city, from as far as Coastal Road.

The San Roque church hosts the more than four-hundred-year old painting of the Nuestra Senora Soledad de Porta Vaga,  known to be to the oldest Marian painting in the country today. It used to send off galleons going to Mexico during the Manila-Acapulco trade.

The devotion to the Marian image became encompassing that it was recognized not only as the patroness of Cavite City but also of the entire province of Cavite. Long lines of local residents paying their respect to the image form after masses, and buses of pilgrims crowd the avenue fronting the church on feast days and during Lent.

Historical Significance - Cavite City
The city was founded more than four hundred years ago. It had been a significant ship port since the Spanish colonial times. Two galleons used for the Manila-Acapulco galleon trade were built at the Cavite City shipyard in the early 1600s. Two forts were also built, one of which now serves as a Philippine Navy base (Fort San Felipe). The city functioned as the provincial capital during the first half of the 20th century. The Americans established the Naval Station Sangley Point after World War II, which was heavily used as a take-off point during the Vietnam War. Sangley Base was turned over to the Philippines in the early 1970s, and is now operated by the Philippine Navy (Naval Base Heracleo Alano) and Philippine Air Force (Danilo Atienza Air Base).

Directions
From the last Bisita Iglesia church - Noveleta
About 7 kilometers north-northeast
By Private Vehicle
- Go back to the junction and go straight onto the Manila-Cavite Road. At McDonald's Cavite City turn right onto Burgos Avenue. The San Roque church is about 1 1/2 kms. away.
By Public Transportation
- Walk back to the junction and board a baby bus with the signboard Cavite City. Get off  in front of Mercury Drugstore, before the bus turns right to the Cavite City public market,and walk along Burgos Avenue. The church is about 200 meters on.
From Manila
By Private Vehicle
- Cavite City is about 33 kms. out of Manila, traversing Coastal Road (Pasay City & Las Pinas), Cavitex (Manila Cavite Expressway), and the Tirona and Magdiwang Highways. At the junction just out of Cavitex turn right onto Tirona Highway, skirting the Aguinaldo House, right then left then right again onto Magdiwang Highway and on to Noveleta. After the Noveleta town hall turn right onto the Manila-Cavite Road. Stay on this road entering the Cavite City arch and passing the Julian Felipe marker to the left. At McDonald's turn right onto Burgos Avenue. The church is about 1 1/2 kms. on.
By Public Transportation
- Air-conditioned buses with the signboard Cavite City get passengers starting from Plaza Lawton (Liwasang Bonifacio) in Manila, traversing Taft Avenue, turning  to Quirino Avenue, then left onto Roxas Boulevard and then on to the Coastal Road,  Cavitex, and the Tirona and Magdiwang Highways. Get off at McDonald's Cavite City and board a jeep going either to PN or San Antonio. Both passes by the San Roque church.