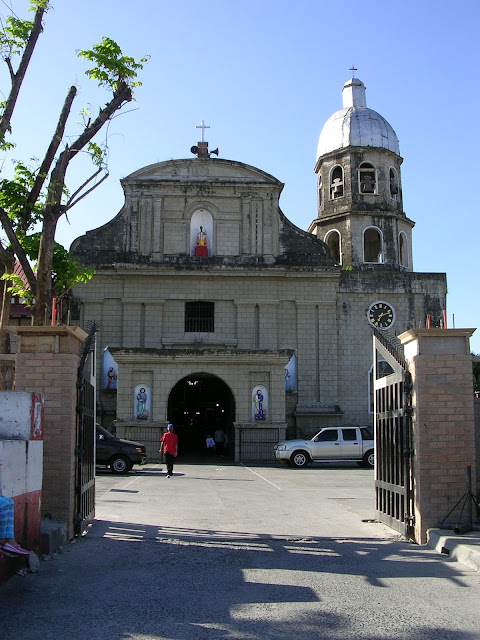 The church in Tanza sits at the end of Santa Cruz Street, fronting the small town plaza, away from the bustle of the highway where many commercial establishments and restaurants have sprouted. It is an imposing edifice in the Baroque style, the facade, like most of the churches in this Bisita Iglesia, is nondescript.

Historical Significance
Emilio Aguinaldo and Mariano Trias took their oaths as the  president and vice president, respectively, of the Revolutionary Government of the Philippines on March 23, 1897, in the convent of the Santa Cruz (Holy Cross) church. 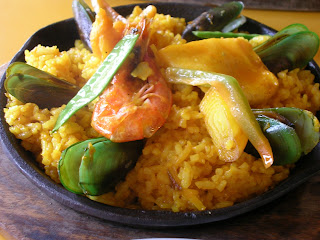 Pit Stop
A hundred meters back along Calle Sta. Cruz is the Calle Real Restaurant, which serves homey Filipino dishes and several variants of paella, including a squid ink version. Above the restaurant is a finely preserved ancestral house called Casa Tahimic, which is worth checking out.

Directions
From the last Bisita Iglesia church - Rosario
About 5 kilometers south-southwest.
By Private Vehicle
- From Rosario church turn onto Gen. Trias Drive by the municipal hall going to SM Rosario. Go straight until the Centennial Road, then turn right onto the Antero Soriano Highway. A few hundred meters on will be the Tejero bridge, after which is the Tanza public cemetery. Turn right by the yellow-walled side of the cemetery onto Calle Sta. Cruz, and go straight. The church is at the dead-end of the street.
By Public Transportation
- Walk to the front of the Rosario town plaza and board a baby bus going to Tanza. The bus goes right at the gate of the Tanza church.
From Manila
By Private Vehicle
- Tanza is about 34 kms. out of Manila, traversing Coastal Road (Pasay City & Las Pinas), Cavitex (Manila Cavite Expressway), Centennial Road (EPZA Diversion Road), and the Antero Soriano Highway. The Centennial Road ends at General Trias where it is crossed by the Gen. Trias Drive and continues as the Antero Soriano Highway. A few hundred meters after the junction is the Tejero bridge, right after which is the Tanza public cemetery. Turn right at the first corner by the side of the cemetery, which should be Calle Sta. Cruz. The Tanza church is at the dead end.
By Public Transportation
- Air-conditioned buses with signboards Naic/Ternate/Maragondon get passengers starting from Plaza Lawton (Liwasang Bonifacio) in Manila, traversing Taft Avenue, turning to Quirino Avenue, then left onto Roxas Boulevard and then on to the Coastal Road, Cavitex, Centennial Road and the Antero Soriano Highway. Get off at Calle Sta. Cruz, right at the foot of the Tejero bridge and by the Tanza public cemetery. Flag a jeep or baby bus going into Calle Sta. Cruz, which go right at the gate of the Tanza church.