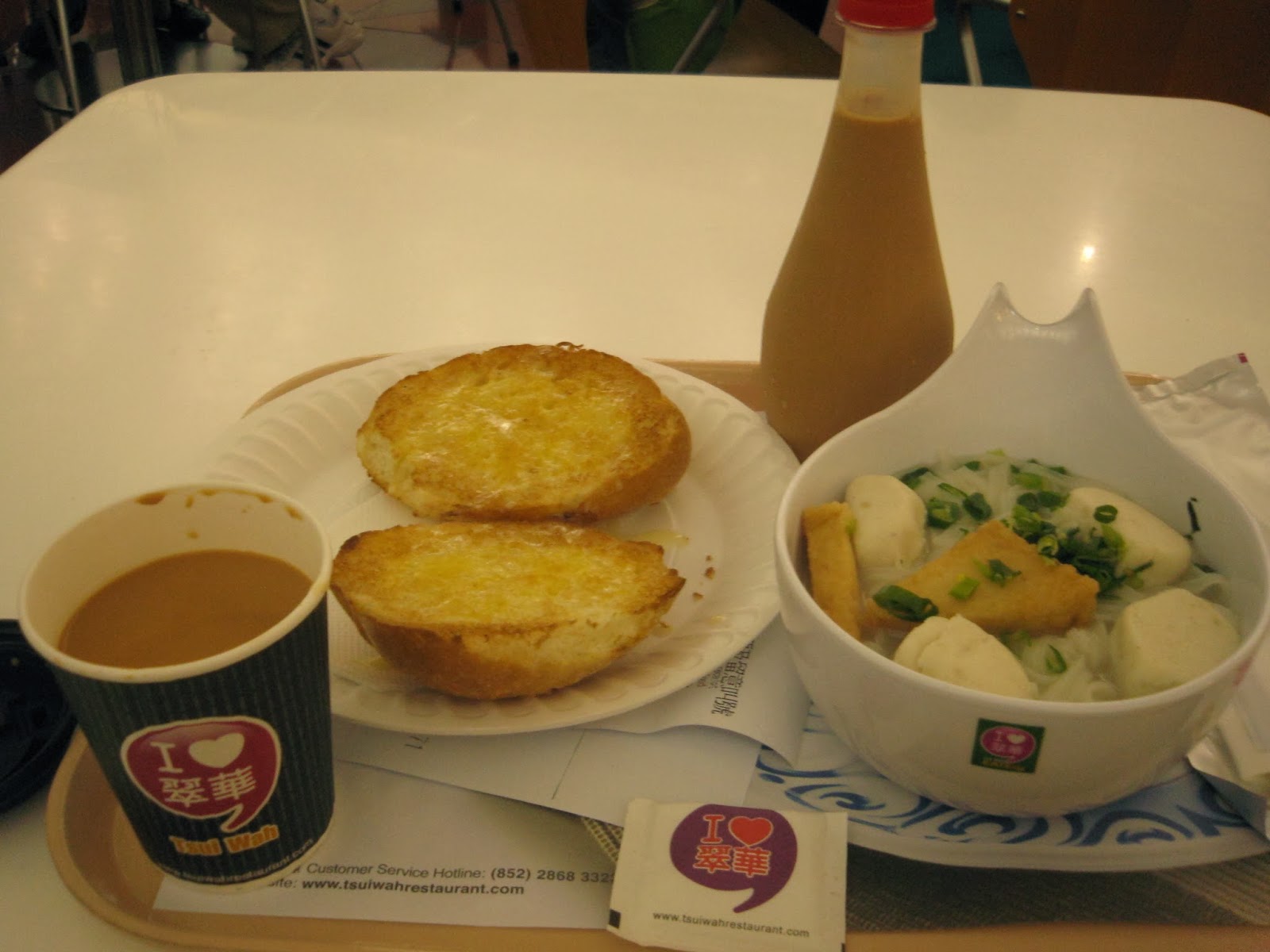 A hot cup of nai cha or milk tea and a couple pieces of sweet buttered toast from Tsui Wah, plus a bowl of fish noodle soup,  were the last things I had upon leaving Hong Kong.

Tsui Wah’s buttered toast was one of the things that made an impression on Anthony Bourdain during the Hong Kong episode of The Layover. I found the shop by the busy Des Voeux Road Central, on the other side of Connaught Road Central along which it is parallel, a large tea house all in glass walls and windows. But this must not have been the original stall that Anthony Bourdain visited, for that was just a tiny, hole-in-the-wall affair.

Anyway, trying this and that and looking for other things besides, the chance to try Tsui Wah slipped me by. But still, luck was on my side, because Tsui Wah was at the departure area of the Hong Kong airport. So I arrived early for my flight, and sat down to savor my last hour in Hong Kong with one of the city’s famous offerings. 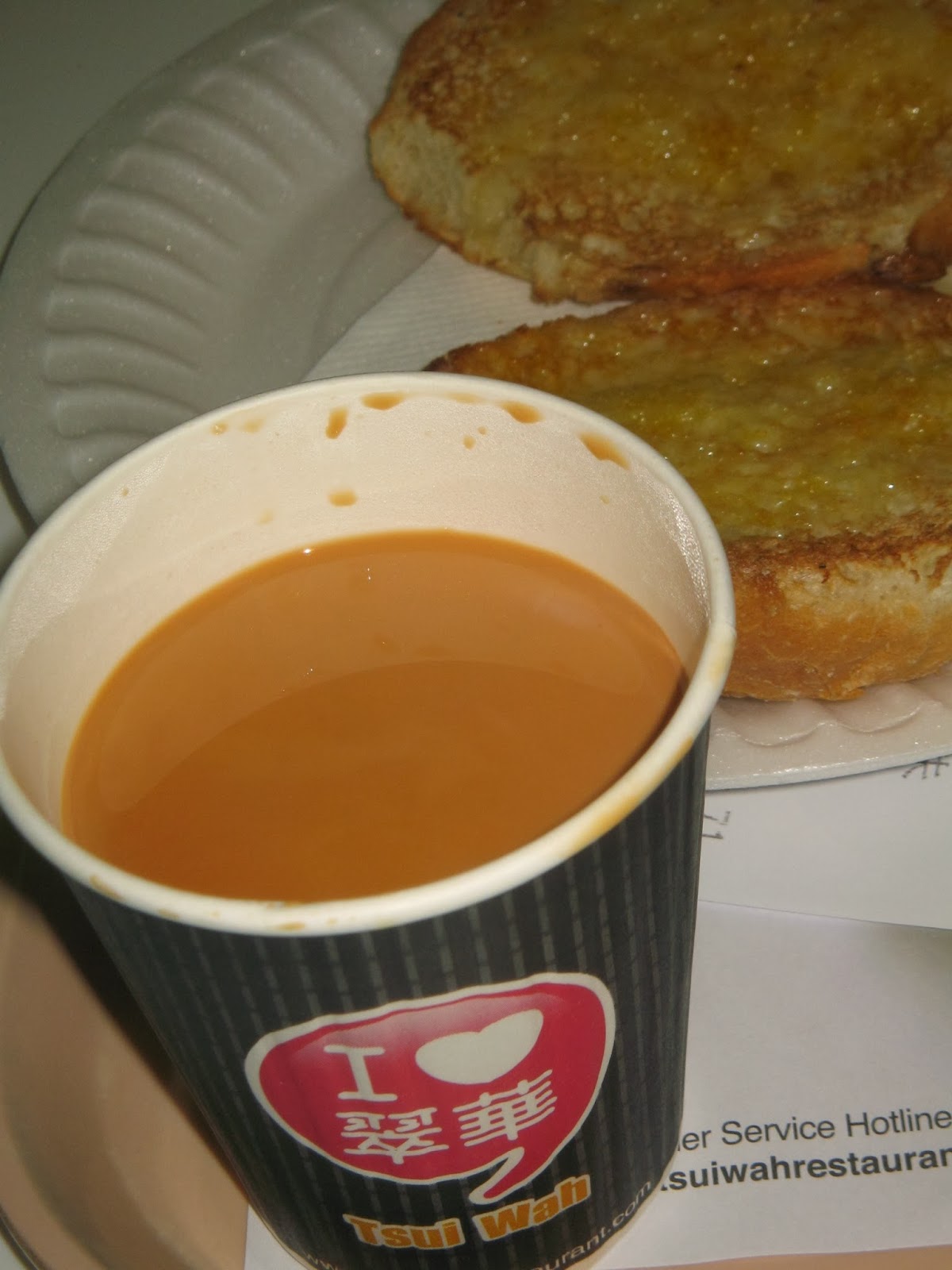 The nai cha was how it should be, hot, creamy and not too sweet, the full-bodied tea providing a jolt to the senses. Which reminds me – in all of the four days I traveled along the expanses of Queen’s Road Central to West, Connaught Road Central to West, and Des Vouex Road, and exploring the malls all around Central,  there was only one cold bubble milk tea shop I passed by, and that was a Gong Cha stall.

Hot milk tea – without the bubbles – can be ordered almost anywhere, though, especially in those tiny, family-run noodle shops. And of course there were all the teahouses serving complementary hot tea to your heart’s content, but without the milk. 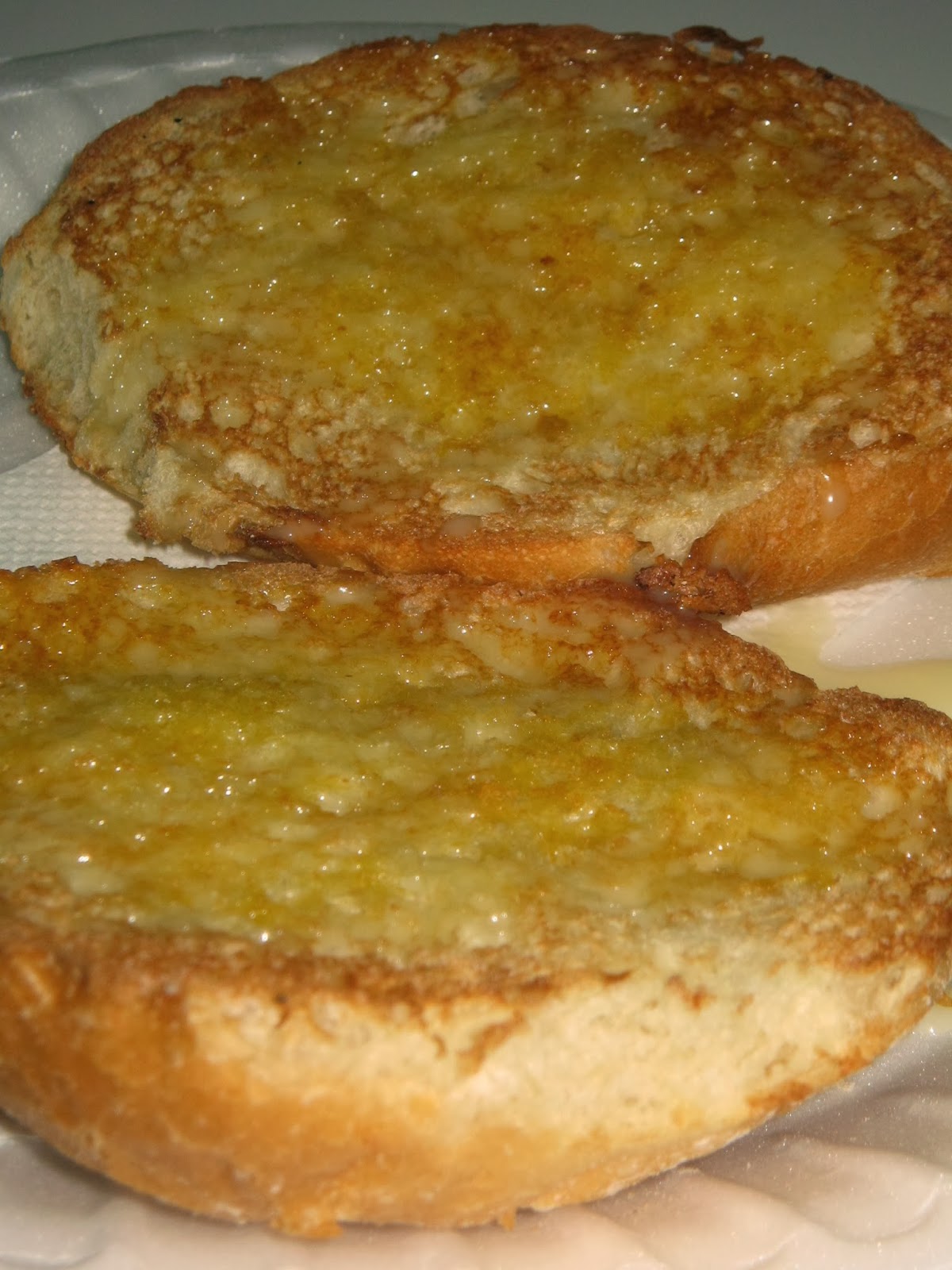 But as for Tsui Wah’s buttered toast, which came slathered with condensed milk, I wasn’t too impressed. In fact upon the first bite I wondered what all the fuss was about. It was just an ordinary bun made chewy by the butter and condensed milk heating up to a slightly crackly thin layer after its stint in the oven.

It can be easily replicated at home, using better bread and taken to a myriad of directions. With cheese? Cream cheese! Or strawberry jam. Cream cheese and strawberry jam! Or mango jam! Even just simply butter – good, salted butter – and a generous sprinkling of white sugar, grilled until the sugar crystals have almost caramelized. 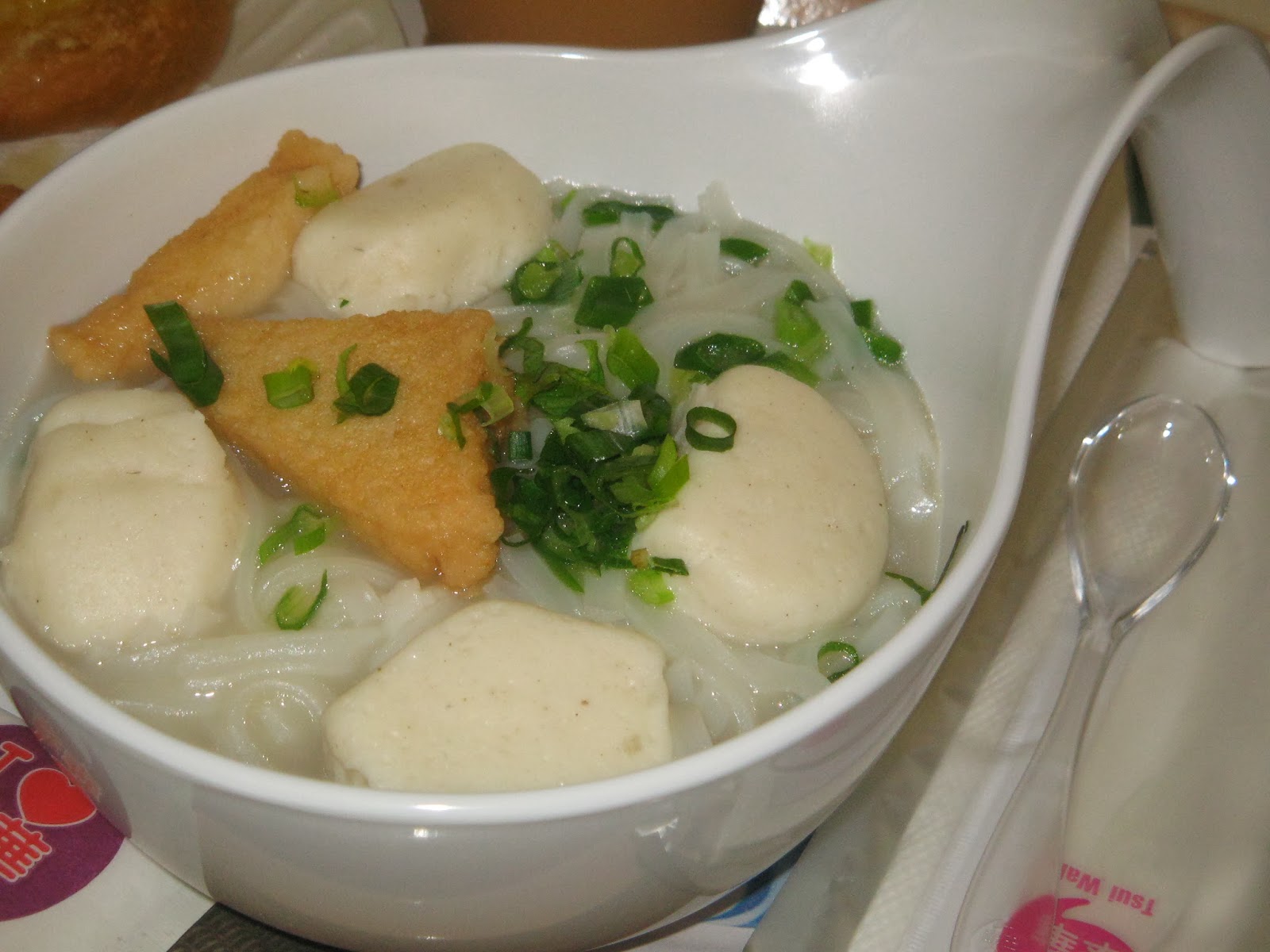 My bowl of rice noodles and fish balls was bland, as expected. All three were incidentally among Tsui Wah's top ten dishes. Tsui Wah’s milk tea is sold in take-home plastic bottles, so I bought several to compensate for the tetra packs of tea and cans of creams soda in my backpack that immigration officials confiscated because I forgot to insert them into my check-in luggage. The bottles were some of the things I brought home, along with several orders of baked buns from Tim Ho Wan, and a heaping of memories of food newly discovered and rediscovered. 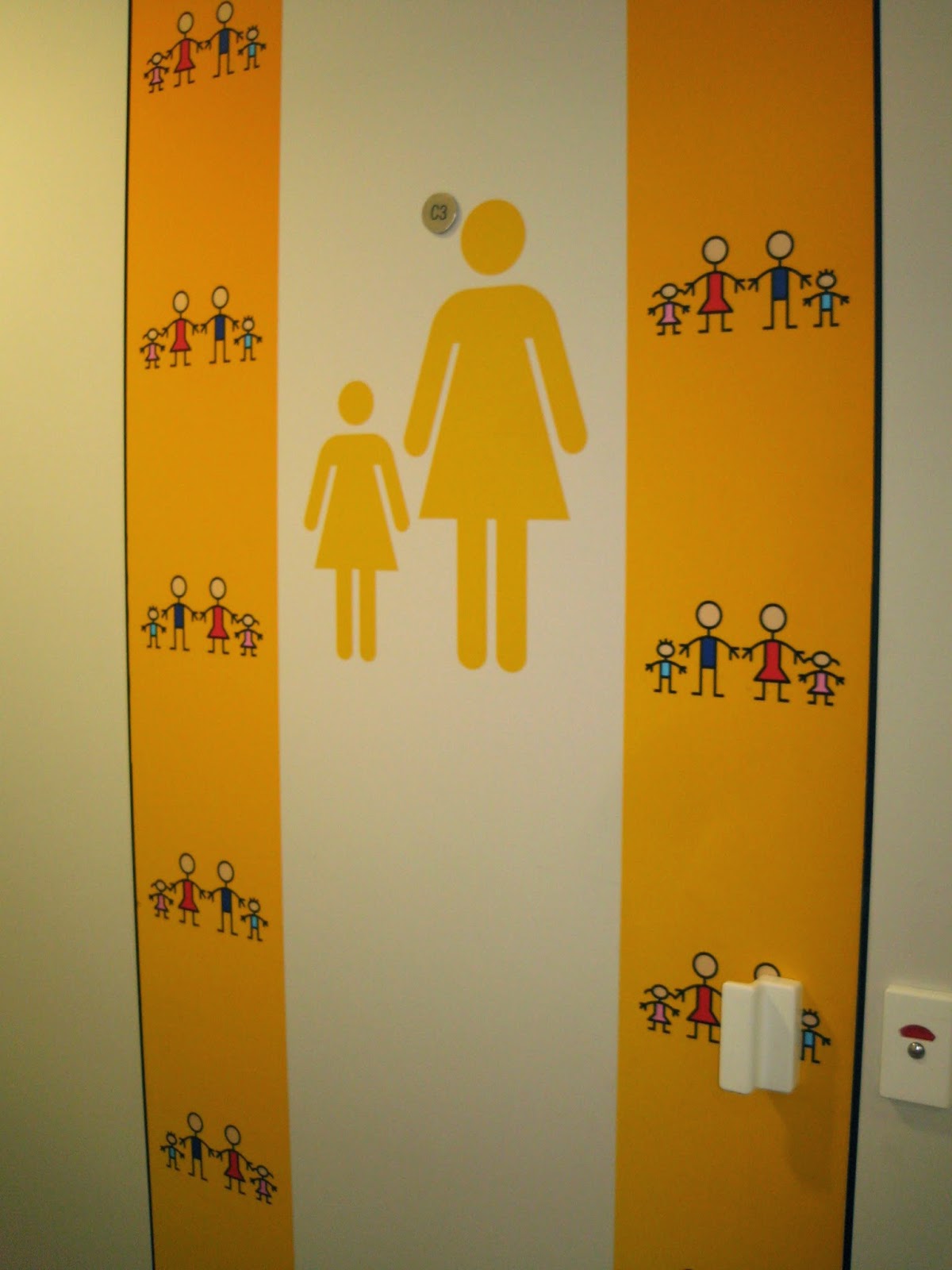 But before I leave Hong Kong entirely, let me include a few other photos taken at the expansive Chek Lap Kok airport. 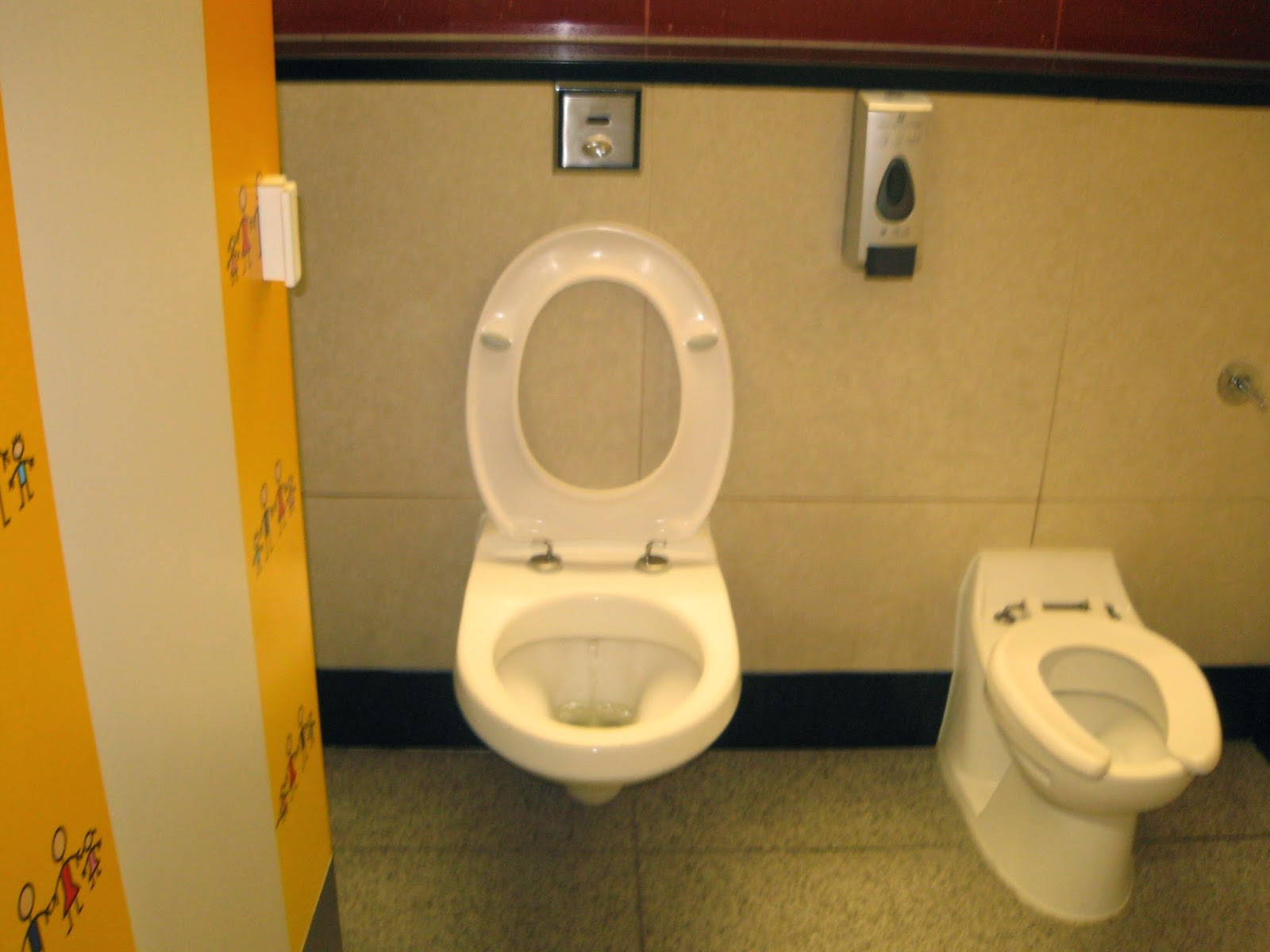 The female CR must be one of the most mother- and child-friendly lavatories in the world. 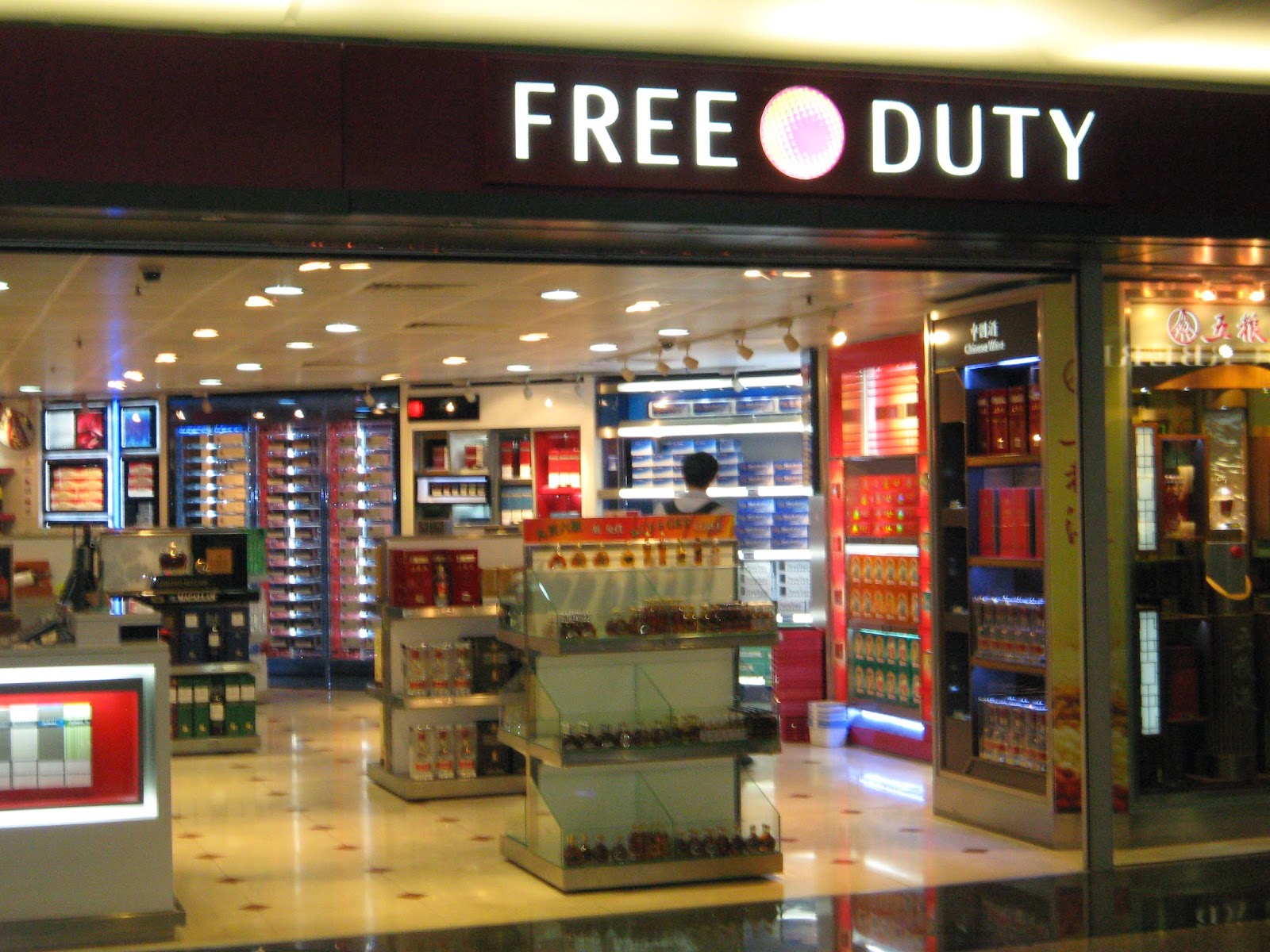 No, this is not a mirror image. And with that to muse over, I boarded my plane.

Hi Lou, I'm flattered that you find my writing funny, because in reality I am one of the most staid persons in the world ;-)