Sugus and Other Portuguese & Dutch Treats 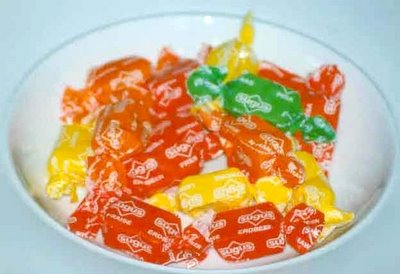 I had tootsie rolls. Now I've got Sugus and I'm really such a lucky girl!

When I started this blog I never knew what such nice treats awaited me - meeting new friends, albeit only virtually speaking, who prove to be so generous and oh-so-passionate about food; new recipes and new twists on old recipes; knowing about new food trends; learning more about my food culture as well as being introduced to many food cultures around the world; and, not least speaking, taking all these from the virtual, electronic world into the real one, via meets and food packages.
The last one, needless to say, have proved to be very exciting, and I feel so blessed on my part, having received generous and tasty gifts from New York, Paris and Napa, Valley, California for the Blogging By Mail series conceived and launched by Nic at bakingsheet, and a food exchange among readers of Chocolate and Zucchini. For the last quarter of 2005, every month I got food care packages from around the world.
This year came with an auspicious start. Just a few days into 2006 I got a new food package, this time from The Netherlands, and it contained a childhood sweet which I have a fondness for but which is not sold in the Philippines anymore. I wrote about missing it in a forum at C&Z, and Swan in Netherlands reacted that she knew the fruity, chewy candies and that it is sold in Portugal. Swan lives in Netherlands, but takes summer vacations in Portugal, and promised to procure some for me.
And so now I have my Sugus - I tried all the flavors at once on the evening I brought them home, such harried frenzy coming partly from the longing I've developed over the years, not once appeased by hard Fruitella, and partly because my preschooler has come to anticipate such nice treats from the packages his mom brings home, and so has become very adept at swiping things, candies most especially.
But what bliss. The Sugus are as I remember them. Mild fruity flavors of strawberry, lemon, orange and lime, not so sweet, such joy to bite into. They brought me back to the carefree past when life was simple and a piece of fruity candy was enough to emboss a lasting smile on my face, and in my heart. During the time when all the people I first loved were still here with me. Thank you, Swan, for that, and for the opportunity to share a piece of my childhood with my son.

But I fear I'm doing a grave injustice to the package by highlighting the candy, because Swan sent a motley of other Portuguese treats and holiday specials from Holland, in a stocking (she wrote a note on a card with a picture of a red Christmas stocking), with apparent love and care and which deserve more than enough praise. 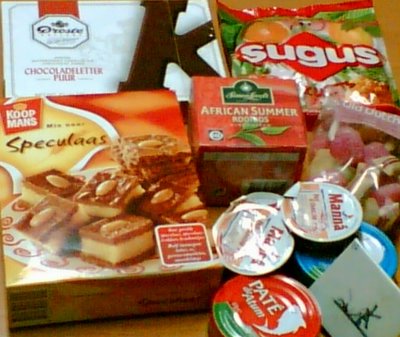 First off is a very fragrant box of a mix for Speculaas, a Dutch specialty spiced biscuit which can be made on its own or with an almond paste filling. In Holland it is molded in various shapes and figures, notably bibilical scenes, windmills or an old Dutch farmer. Speculaas dates back to medieval times, and is traditionally associated with the feast of Sinterklaas, Saint Nicholas from whom Santa Claus probably evolved, celebrated on the 5th of December. The box is labeled in Dutch, but Swan thoughtfully wrote out two recipes in English. I'm raring to make some - the smell emanating from the package is making me drool. 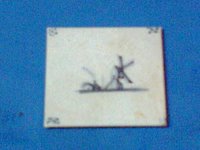 There is a collection of old-fashioned hard candies - cinnamon pillows, mint pillows, pear drops, boterbabbelaars (a kind of butter caramel candies), licorice, and others. And of course a big bar of Dutch chocolate! Then there is a a box of anti-oxidant-rich African Summer Rooibos (Red Bush) tea, which was first introduced to me via Dev's package from New York. I loved it so much that now I'm so happy I have a whole box of them from Swan. She also included a Delft Blauw (Blue) tile, a sought-after and historically precious product of Holland, decorated with a windmill and made into a refrigerator magnet.

The rest of the Portuguese loot consists of various paté - atum (tuna), sardinha (sardines), and several packets of camarao (shrimps). All in all a very special and well-thought-of care package. Extremely appreciated, Swan, from a person you made especially delighted. I will try to appropriate each item to make them last a little longer. Except, of course, for the Sugus. 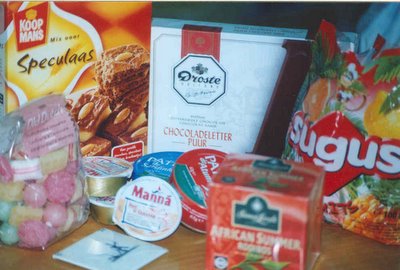 Had I known Sugus is your favorite, I could have brought you some right at your doorstep! J/K. i wouldn't have made it to your house just the same..what with the schedule I had..and you were in Cavite (palusot!)

Funny thing, I stumbled into your blog when I was googling for Sugus. I used to eat lots of those when I was a kid, too. Tomorrow I'm buying a pack, for old time's sake :D

I'm portuguese. I think it's kind of funny that your friend sent you portuguese patés. Didn't realize they were seen as portuguese treats, but we do eat a lot of that. They're served in most restaurants as appetizers.

There's lots of good food in Portugal! You should try our cakes, Porto wine and codfish... Actually, you should try everything except "iscas de fígado". It's fried liver with garlic. Ew.

i am interested in finding photos of the old Sugus packaging. They used to be in a box, with a coloured insert of various flags and national costume of countries.
I am from South aArica originally . Vasco Da Gama and Bartholomew Dias were the earliest Portuguese explorers of Southern Africa. The Dutch East India Company established a refreshment station at Cape Town. This station was a half way house to the East. As you probably know the East had spices which were a very important commodity in those times. I think it was 1852. Havent done S.A. history for ages!

Sorry don't have photos of the Sugus I ate when I was a kid. But I remember they didn't have those flags that you mention.

The Spanish and the Portuguese came to the Philippines as well for the spices.