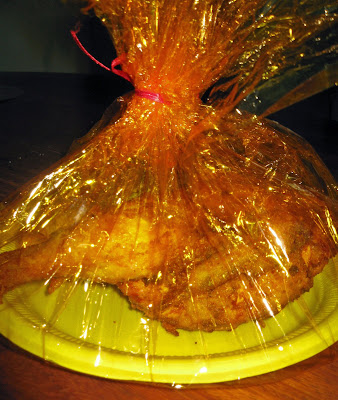 It has been noted that the bulk of weddings in the Philippines happen during the month of December, and on to the next months of the cold season. And so it is also an acknowledged fact, though I don't have the statistics - partly due to the weddings and mostly to the cold season - that hospitals encounter the most number of deliveries starting September of every year (I hope you're doing your math, so I don't have to, ahem, expound further ;-) ).

And then it follows that about 2 months afterwards, we experience a deluge of christenings.

Old customs prohibit newborns from being taken on trips out of town, most especially if they have not claimed their names yet, which is the Pangasinan idiom (agni angala na ngaran to) for babies who are yet to be baptized. It is considered bad luck for un-Christened children to travel - they're prone to encounter accidents and disasters.

I think this is much of an old wives' tale - one of the many that we sometimes set aside as having no scientific basis at all.

We had brought my newborn daughter to Pangasinan from the Quezon City hospital where she was born when she was but a day old, and nothing untoward happened. Although she cried throughout the entire trip, we credit that to her already being hungry and my not being able to produce milk yet. And then a day before her baptism we took her to Baguio City - at the height of the meningococcemia (meningococcal meningitis/cerebrospinal fever) scare.

She's a healthy and lively thing now, at three. But sometimes, it behooves me to think about the prudence of keeping newborns at home.

During our one-on-one, pre-nuptial briefing, we were advised by the priest to exercise all caution, because the marriage rite is a holy sacrament, and the devil will do all that is possible to prevent such a sacrament from being consumated.

As it is, a Christian baptism is also one of the seven holy sacraments.

Anyway, I think a lot of people practice the custom, or else have their newborn babies baptized as early as possible. So by December of every year, at a time when families have already recovered from the birth of a baby, and there is enough money from Christmas bonuses (not to mention prospective ninongs and ninangs being awash with cash from their respective bonuses), invitations to baptisms start pouring in.

In my hometown baptisms in December and early January also ensure that the baby's Christian identity is confirmed - confirmation being another holy sacrament - after the bishop's mass for the town fiesta on the third week of January.

It is also somehow a way of feasting on a date that is still safely far from the impending arrival of the Lenten season. 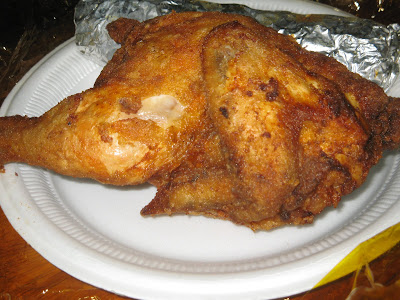 A Christian baptism is always a big event, as big as a wedding, though without all the trimmings and trappings, but requiring almost the same expense. The reception is traditionally held at noon, following the church ceremony always scheduled at 11AM.

And it is always a community event - no need for invitations - people have the uncanny sense to know when a baptism will be held and where, and they come in droves. Of course, the preparation for the feast starts several days before the event, with the participation of a lot of people, so word goes around easily.

One notable custom during baptisms in Pangasinan is the palibit, literally translated as padala or "letting one carry." In slang, it is take home, food from the bounty of the baptism reception. Guests, especially kin who come from out of town, are given plastic bag-fuls of food - their choice or what's plentiful from the menu.

One distinctive palibit, though, is the food given to godparents or ninongs and ninangs. Traditionally, this palibit is specially prepared, and not served as part of the feast. Customarily, it is half a chicken that is fried, wrapped in colored cellophane and be-tied with a fancy ribbon.

Other meats may be added (second photo shows that the palibit included an aluminum foil-wrapped embutido - steamed meat roll), but the fried chicken is always the star of the show, sometimes accompanied by a cup of home-made atsara.

One of the best fried chicken I've ever tasted is a palibit from a binyag. The meat was soft and succulent, very garlicky in taste, and the skin crispy without the batter that coats all fried chicken nowadays. That one was heavenly delicious in its simplicity - just properly seasoned and fried masterfully.

The common practice in cooking palibit is first boiling the whole chicken with lots of crushed garlic, onions, salt and pepper, then chopped in half, rubbed with salt and pepper, and deep-fried in very hot oil.

I'm not sure about the significance of giving fried chicken to the people who will (supposedly) be part of the child's spiritual upbringing, but it's been the practice in the province way before I was born. I guess because in the old times fried chicken is not so common as it is now that everybody can sprout wings anytime, as the saying goes.

This is further bolstered by the practice of boiling the chicken before frying it - it points to the days when broilers were not yet farmed in commercial quantities - native, or free-range, chicken were the only chicken available, and these need to be tenderized before frying.

Anyhow, the practice has survived to this day, and it is still fried chicken even when all that you can order out in any cooked food outlet is fried chicken. But of course the fried chicken has been modified to adapt to the times - like the use of broilers eliminated the pre-boiling part, and the chicken is coated with all sorts of seasoned batter that sometimes when you get home the skin is already soggy. Or that somehow it makes you think it was ordered from McDo or Jollibee.

hi, there. i am a frequent lurker for a while now and i get too excited everytime you mention anything pangasinan cause i am a pangasinense too. it is very common to us filipinos having doggie bags after a party but this "palibit" after baptismal parties is totally new to me. maybe not in my hometown of mangaldan. anyway it's a great information! i truly enjoy your blog and been trying your recipes which in a way helps my homesickness. more power to you and your blog! maong ya agew ed sicayo.

Thank you for dropping me a line, manok. Talaga, anggapo ed Mangaldan ya? Maybe it's just in our town. Come to think of it, I've attended binyag in Binmaley and the doggie bag contained bangus (logical), while in Bugallon it was a Pedrito's cake (sosy, hehe).