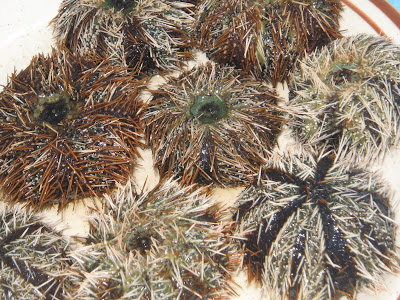 [Sea Urchins]
Besides the beautiful edible seashells that are unfamiliar to me - I haven't come across them in Pangasinan and Cavite and in my island-hopping adventures across the country - one of the most exciting features of the Puerto Princesa public market is the almost daily offering of sacks upon sacks of live tirik, which is the Cuyo term for sea urchins.

And at Php10 for eight pieces of small-sized ones, or Php20 for six pieces of medium size, they are, incredibly, dirt-, cheap. Well, almost.

I trekked around the tiny island of Malapascua in northern Cebu, and along the shores thousands upon thousands (this may sound like an exaggeration, but that's how it looked to me) of tirik, in every imaginable spine pattern and color, were gathered at the base of rocks and crags. Free for the taking. Also on the shores of Bantayan Island, in the northwestern portion of Cebu, though not in the same, breathtaking quantity.

If I had known then how to eat them right then and there, I might have died of sea urchin overdose, if there is such a thing. As it happened, I encountered nobody who could teach me how. Maybe they didn't eat sea urchins in Cebu.

In Puerto Princesa sea urchins are valued as pulutan (referring to the Pinoy food accompaniment to any alcoholic drink). 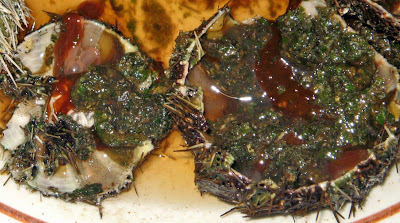 [Vegetarian lunch]
As instructed by market vendors, breaking open sea urchins to get to the edible part was actually easy. Using the blunt edge of a big knife, the test, which is how the sea urchin shell is called, is halved, and the seawater that filled it to the brim overflows.

The test is full of what the sea urchin has eaten, mainly roughly broken sea grass and seaweed, but also some tiny sea creatures. I was told that those who are used to ingesting tirik drink the brine and eat the curd. 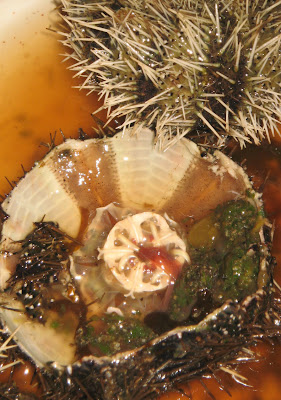 [Butt-naked]
Clearing the half-digested debris, the urchin's anus, located on the upper center of the test, shows itself. There is a transparent brownish red appendage connected to it from the sea urchin's mouth, which is at the opposite end on the bottom of the shell. 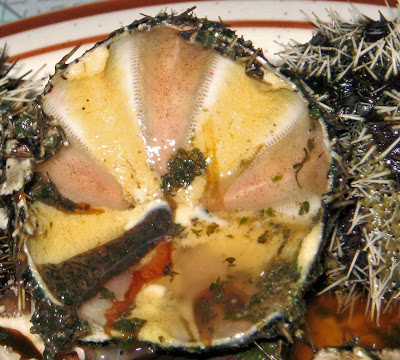 [Briny yema]
The prized edible part lines the lower portion of the test - five thin triangles of rich yellow. These are the urchin's gonads, and they, as well as the star pattern on the outside of the shell, are proof of the sea urchin's relation to the starfish and other similar sea creatures (I think they're close cousins). 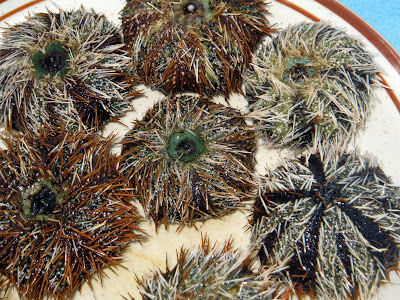 [Tiny spines waving as if with the currents]
The first time I ate the edible part (the yellow gonads, popularly known as the sea urchin roe, only, since I am not used to eating tirik) of a sea urchin was in a Korean restaurant in Makati City many long years ago, with several Korean investors in the country, who took care of the ordering.

I remember vividly, to this day, how it tasted like. The first sensation I felt was its texture - a bit slimy, with the consistency of a soft tongue. It tasted vaguely sweetish, and reeked of the sea where it came from. But the general impression was that it was like raw fish roe - in consistency and taste, because fishy tones stayed at the back of your throat upon swallowing it.

That first taste was affirmed by subsequent orders of uni temaki (sea urchin rolls) in Japanese restaurants around Metro Manila. So, it was a great surprise how Puerto Princesa tirik, fresh from the sea and eaten on the same day that it was harvested, tasted.

It was sweet, and brightly so. It tasted as bright as its yellow hue. And no fishy undertone whatsoever, which finally settled the nagging doubt at the back of my head that uni came from a medium-sized fish.

The Puerto Princesa vendors told me to eat the tirik on the same day I bought them, and if for some reason I couldn't do this, I should scrape the roe and store them in the refrigerator. The uni in Metro Manila restaurants are probably of the refrigerated, maybe even frozen, kind. Or maybe they came from a fish, hehe.

For those who have delicate stomachs but want to try eating tirik, the vendors advised that the tirik be roasted before opening the test. The person in charge of my husband's outfit in Puerto Princesa, a big hulk of a man over six feet tall, said, when I offered him some tirik I was half-buried in, "Ahh, maybe we should roast them first?" The second-in-line said he was happy with the sikad-sikad.

I could actually live in Puerto Princesa. The market is full of touristy things like the souvenir shops full of interesting woodworks (though they are the subject of some controversy as some feel it is a bastardization of tribal culture). And the requisite tie-dyed thingies and daing (sun-dried seafood) stalls, and freshwater and South Sea pearls and beads in all sorts of color, shape and size, and at such low prices they drove me crazy. I was overwhelmed by the quantity of roasted, fried or air-dried kasuy (cashew nuts, err...seed), and dehydrated fruits turned into chips, particularly langka (jackfruit) from Vietnam.

But you hit these spots only during your first few days. When you're staying for the long haul, you turn to the more essential parts of the market. Like the vegetable section, and the condiments section, and of course the wet market portion.

And I could be at home in Palawan, as I had concluded (nay, desired) time and again every time I went back. But the previous times I hit this conclusion because of the beauty and serenity, and greenness and freshness that turns all things sparkling, of the province. This time it was affirmed by the available food that could be cooked like I was home. 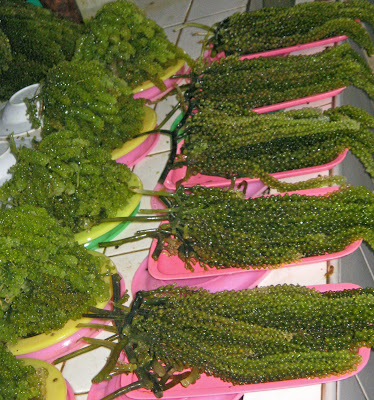 For I found that in the Puerto Princesa public market there is ar-arusip (lato or lato-bilog, green seaweed Caulerpa lentillifera, also known as sea grapes) in almost the same size and taste as that I grew up eating in Pangasinan (smaller and brini-er than the common lato), with other kinds of seaweed besides.

Besides fish and seafood, vegetables were aplenty. All that I'm used to. Even the "Baguio vegetables" - cabbage, spring onion, celery, potatoes and carrots still sporting clumps of soil - typically grown in the hinterlands. And everything needed to cook a decent pinakbet.

But more importantly, I found, with much joy, bagoong (salted fish paste), alamang (salted fermented krill) in two variants - wet and and dry - and much to my delight, saluyot and labong, bunga'y marunggay (bunga ng malunggay, the fruit or "pods" of the moringa oleifera tree) and, incredibly, baeg (!), which is not commonly found in Metro Manila and practically non-existent in Cavite markets (though my cousin has a tree planted in her Imus backyard, and sometimes gives me a bagful), and which I thought was only eaten by Ilocanos, Pangasinenses and Batangueños.

So for the whole stretch I felt at home. In the full sense of the word.


This is an entry to the 2nd edition of To Market, To Market hosted by Gay at A Scientist in the Kitchen. You can find the round-up of markets from around the world here.

I've been slacking on my blog-following lately as I'm making some career changes and moving... but my boss just promised me a trip to Manila in the Fall. I forget where in the Philippines you're from, but I'd *love* to see you if you're nearby.

I'll be around for you, Tanya! Do just let me know when and where you'll be staying!

And oh, thanks for the compliment but sea urchins are not for you - I remember you don't like seafood. ;-) Will be scouring for some good fruit and vegetable venues for you. And of course, chocolate!

I admit, I've just never gotten into the sea urchin craze. Lots of "upscale" restaurants here serve it and I just order steak!

People say it's an acquired taste, Mrs. L, but the taste isn't really that exotic. Perhaps it's just the thought of eating something that came from a frightening little thing that turns people off. But it tastes just like roe. Better than caviar, for me. ;-)

A Scientist in the Kitchen said...

I remember eating freshly caught sea urchins or tuyum in Camiguin. I would describe the taste of raw sea urchins like salty leche flan.

Right on the spot, Gay!