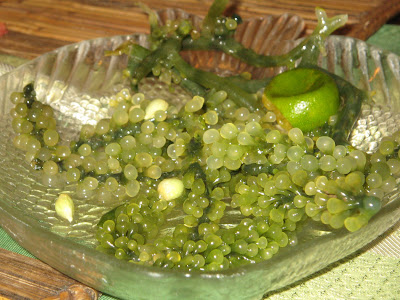 I first heard of Kalui Restaurant from a friend - a fellow epicure and traveler - who went to Puerto Princesa many years ago. He texted he had new finds, but that he wasn't able to sample Kalui because it was then undergoing renovation.

All the time that we were in Puerto Princesa locals recommended two, and only two, restaurants - Kalui, and Badjao. It never failed - every time I asked any Puerto local the words Kalui and Badjao flew off their mouths at once, like a mantra.

Badjao I had tried on a previous trip. It had been a memorable dinner hosted by the son of the late governor - a feast of lobsters, blue marlin and prawns simply steamed with grilled eggplants and fresh tomatoes, the sound of the sea lulling us and small fish flicking here and there under our feet, literally.

I longed to go back there, but we didn't have the chance - I became so engrossed with the market. It was such joy to find lovely things to cook and eat. And the kids enjoyed the full expanse of the greens that surrounded our temporary home that we simply forgot about going out.

On the eve of our departure, though, a friend picked us up and took us to, where else? Kalui, for a sort of despedida dinner.

It seems locals are proud of Kalui. It's been around for a while now - probably one of the first of its kind. It's well publicized, and even the present mayor is always spotted entertaining visitors there.

And I believe Puerto residents have every reason to be proud of Kalui. It represents an artistic, sophisticated endeavor in what is considered the backwoods. It is named after the owner Louie Oliva, Ka being short for kapatid (sibling) and Lui the nickname, although it is spelled as one word.

Our host chose to take us to Kalui for dinner so that we could appreciate the effect the lights play on the interiors. Kalui is a stylized nipa hut with all the trappings of a good life. Made of bamboo, nipa and other indigenous materials, burnished to a glow, multi-leveled and airy and surrounded by greens and cascading water. It is raised from the ground like a true nipa hut, and as you take off your shoes (required) your feet feel the cool bamboo floor.

The interiors is crammed with paintings, decorated lanterns, and other artsy knick knacks, the corners hosting fresh flowers and fruits, with one panel showing off whole jackfruits, papayas, watermelons, melons, pineapples and other bounty of the land - all real and not papier mache.

You can opt to dine sitting on cushions on the floor, or in secluded alcoves. There are wash areas that employ large banga (clay jar) to hold the water, and the washrooms can rival any five-star hotel's. There is a computer where you can vote for Puerto Princesa's St. Paul Subterranean River Park and Palawan's Tubbataha Reef for the New 7 Wonders of Nature.

This was the only time I had been to Kalui, so the impressions I put across is based on this one trip only. I have to qualify my opinions, because it seems to me you go to Kalui to soak in the ambience and revel in the atmosphere of a first-rate, first-class vacation house. The food is just something you partake of for want of something else to do after you've toured around - something you don't pay much attention to. 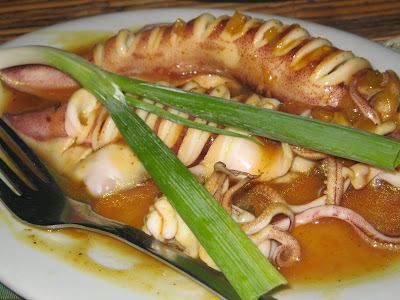 We ordered the Kalui special (I've forgotten what it's exactly called), Php849 (approx US$20) for a full course meal that you let the chef decide what to serve, based on what was available at the market that afternoon. It consists of soup, salad, two seafood courses, vegetables and dessert, for two.

We were first served two small cups of clam broth, infused with ginger and lemongrass, and containing one single clam each. I didn't take a photo because that clam just looked so sad sitting alone in that soup.

Then two small plates of lato (sea grapes) that you eat dipped in a squeeze of kalamansi or a drop of the spiked vinegar in a bottle on your table.

Our seafood for the day comprised two small squid sauteed in a hot sauce with leeks, and two steamed shrimps. 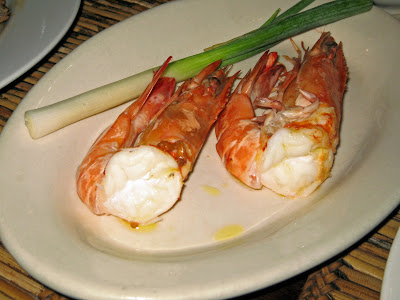 Don't you just feel so forlorn looking at these? How can you eat just one shrimp in a meal? I mean, Filipinos love shrimp, and order by the kilo, not by the piece! 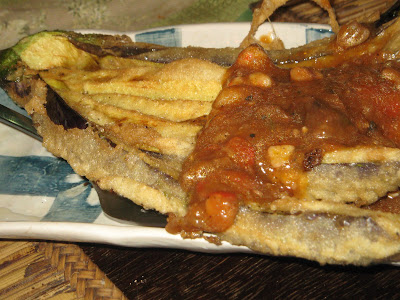 The main courses were served one at a time, and the last to arrive was this fried battered eggplant with a chunky tomato sauce. This was undeniably good, but by this time I was so bewildered I couldn't properly appreciate it. 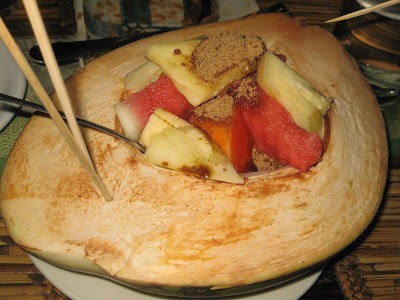 Kalui's over-all atmosphere raised up expectations on the food a little bit too high. Or maybe there should have been a notice at the entrance that the price of the food is inclusive of the entrance fee to the area, and the right to enjoy the ambience.

I have scoured the city market almost every day for two weeks, so I am sure that the entire meal cost Ka Lui less than a hundred pesos (approx US$2.50). Sure, everything was fresh, the food was cooked simply and impeccably. But I know Ka Lui could have been a little bit more generous, since everything served was local and can be found in the area in abundance.

That meal was just so contrary to the Filipino sense of hospitality - when you have guests in your house you feed them generously. Maybe that renovation spelled a lot of cost overruns.

Good thing my husband's unit threw an afternoon party before we came to Kalui, so we were still full at dinner. Or else I would have asked my friend to take us to Badjao next. Or even to Bona's for a comforting bowl of pho. For I craved to be comforted then.

It was sad to have our Puerto Princesa idyll end on a sour note. But the entire vacation was one high note after another, a symphony of joy that nothing could ever spoil. You had to have a flat, or maybe a sharp, sometime.

Sounds like a wonderful place to look at and be in if you don't have to eat!

Sea grapes = seaweed that harbor a lot of these green little globules that burst with briny liquid when you eat them. We call them ararusip or ar-arusip, or lato.

Yes, I think it's best to be in there to see and be seen!