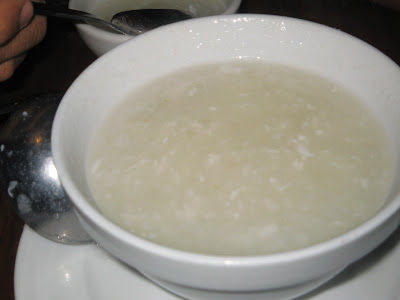 [Nido (Bird's Nest) Soup]
I had tried nido soup before in Metro Manila restaurants, mostly in Chinese restaurants, purely out of curiousity. I had discontinued this practice because I hadn't found anything appealing at all in eating thin strips of white rubber in a bland egg foo-yong soup. Or eating hototay-like soup and asking where's the nido?

This was my fourth trip to Palawan, but I don't remember ever being served nido soup in our previous trips, even during the family vacation in El Nido, where the birds from whom the nests are stolen live in abundace in the limestone cliffs.

So the husband vowed it a must that we eat at Balinsasayaw, so named after the local term for the native swiftlets that produce the nido, or bird's nest. And of course we had to order the balinsasayaw soup (Php350, good enough for two), made from the sticky nest that is a result of the bird's saliva, or some say the bird's regurgitated diet of seaweed.

It was still egg foo yong, but the nido pieces were soft and tender with none of the gummi-ness I have come to expect. They tasted fresh, not dried, and surprisingly flavorsome. The best nido soup I've eaten. But of course. We were in Palawan, after all.

It is said that bird's nest is the world's most expensive food ingredient at source. I can't say it's well worth eating it, but our soup's price tag was fair enough, even cheap, considering its purported medicinal properties that make it so highly sought after. 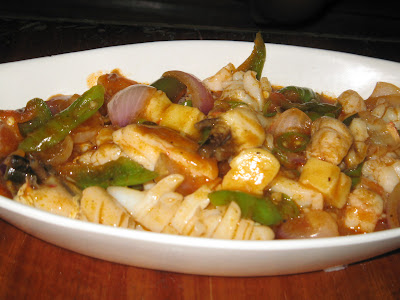 The newer restaurant along Rizal Avenue consisted of an open air main dining area, with several small huts on the front lawn, surrounded by plants, for a more private al fresco dining experience.

We ordered all the dishes with the signature balinsasayaw tag to them. The Balinsasayaw Express consisted of seafood (fish fillet, shrimps, squid, and sikad sikad out of the shell) sauteed with bell peppers in a mildly hot sauce. I loved this - the sauce was good and did not drown out the individual flavors of the seafood, like eating something sizzling that did not come on a sizzling plate. Great on rice. 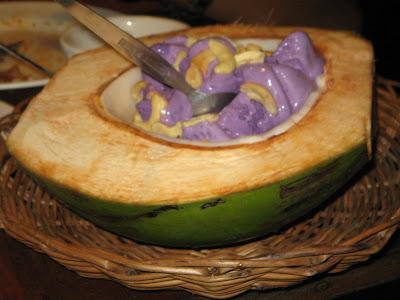 [Balinsasayaw Special]
And because it's a habit of mine we had to have dessert, and the house specialty is halved fresh buko (young coconut) filled with several scoops of ube (taro) ice cream and sprinkled with roasted kasuy (cashew nuts) halves, cashew nuts being one of Palawan's main products.

I have something against restaurants' penchance for serving ice cream to cap a meal. I think a la modes are a very unimaginative way of providing desserts. As are cakes.

But the pairing of ube and buko was just wonderful - scooping out velvety creamy ice cream then scraping out tender shreds of buko from the shell was divine, the ube silky on the refreshing coconut meat.

The kasuy provided punctuations of crunch and nutty flavor, making it a multi-textural ending to a good dinner, and grounding us to where we were at the moment.

In the province of our dreams. 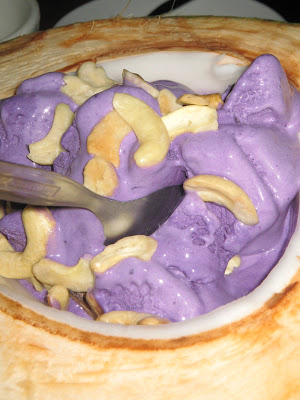 I read somewhere that it is a very dangerous feat to obtain these nests...like they live for weeks on top of cliffs as climbing down was precarious and took days!

The cliffs themselves are a testament to that, Lalaine. They're smooth, pointed and full of sharp crags.

My mom was so excited when you talked about kasuy as she remembered and knew what they were without seeing them :)

Mrs. L, may I refer you to a previous post about kasuy, maybe she had eaten the fruit/cashew apple, too?

I tried the bird nest soup last year from like www.geocities.jp/hongkong_bird_nest/index_e.htm . Tastes really good... yeah, I thought it was gross at first, but wow, you won't regret it.