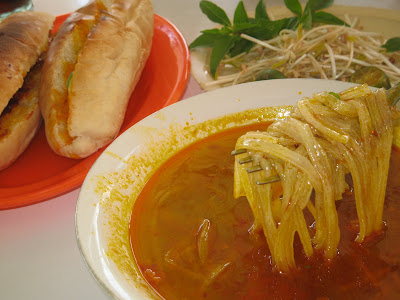 
The Puerto Princesa food scene is well-known for its Vietnamese eateries, the city having been a haven for who were termed the boat people in times past. By the end of the airport strip, along the coast of Honda Bay near the Kalayaan Beach Resort, there is a small enclosed garden marking the place where the first refugees from Vietnam landed.

A Vietnamese camp had been established within the vicinity of the airport, but has since been relocated 15 kilometers away from the city. The Vietnamese restaurants/eateries - just houses, really - remain in the city, though, the Vietnamese cook replaced by local apprentices.

Vietnamese restaurants offer a wide array of specialty dishes imported from the homeland. Ingredients previously unavailable in the area were introduced into the local flora, and the making of raw materials have become a sort of a local cottage industry.

The agency which my husband works for sends working units every year to Puerto Princesa, so it happens that most of those in the agency have "come back come back" (this is a local term applied to tourists/visitors who are bitten by the Palawan bug that they hanker to go back again and again, smitten by the beauty and lifestyle offered by the province, but in the case of my husband's colleagues, they are forced - willingly so - to go back due to work requirements).

So the husband - being his first time in Puerto, though not in Palawan - and I were in the company of "veterans," and they took it upon themselves to introduce us newbies to their favorite haunts.

And the foremost of these - the major one, actually, and I heard that they pine for it in between work assignments - is Puerto Princesa's chao long. Right on our first night we were taken to Bona's Chao Long Haus, on the street where most of Puerto's famous eateries were once located.

There are many chao long outlets in the city, but Bona's is THE chao long as far as our hosts are concerned. I never got to try others, so I can't compare, but I can't complain - our hosts have all the reason in the world to worship Bona's. And worship they did, every night.

I should qualify here that this is Puerto Princesa's chao long, because according to available literature on the internet, the Vietnamese chao long, as found in the streets of Saigon (Ho Chi Minh City), is "scrummy" rice porridge (the chao) laden with innards (the long), or lugaw bituka in Filipino.

Puerto Princesa's chao long is flat, thin rice noodles in a sweet-savory broth with your preferred meats (beef, buto-buto or beef bones, pork), served with the requisite plate containing sprigs of mint and basil, raw bean sprouts and a piece of kalamansi. 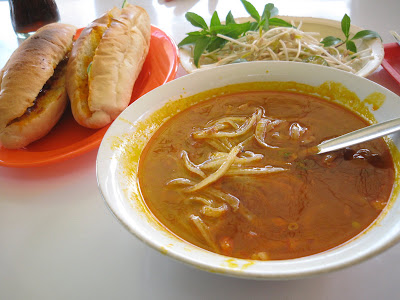 A regular bowl costs Php30, the special bowl (nothing more special, just a bigger bowl and more noodles and meat) Php45. Chao long is the only dish being offered, along with French bread made into a sandwich (filled with your choice of pork, chicken, tuna or egg, at Php25) and drinks.

The veterans cite a couple of reasons for being chao long addicts - first, that Bona's is the only place where one could have a decent fill so late in the night or in the wee hours of the morning in a city where all restaurants close at 10PM.

Second is the chao long, and the accompanying French bread, itself. It is a very fortifying bowl to immerse oneself in after a long day at the beach, or after exhausting long hours at work, or a night of hard partying, or of an extended drinking session. Any excuse is valid for a chao long trip, and believe me, even no excuse at all.

For it was really quite addicting. From the first tentative sip to the last precious slurp - sllluuurrrrrppp, to the last drop - you are hooked for life.

Many times, when I was told that we were going to chao long (it becomes a verb, as in "chao long tayo!" or "let's chao long"), that I had to complain - what? again? aren't there any other restaurant in PP? - but off I always went, dropping the baby in the nanny's lap.

The long thin noodles were unlike anything you could find anywhere in the Philippines, even in Vietnamese restaurants that have international presence. They are made of rice, as are those in pho restaurants (pho being the Vietnamese term for rice noodles), but in the Puerto chao long's case, it was very, very, sticky that it seems it was made of malagkit (glutinous rice).

The noodles were almost translucent, as opposed to pho being quite opaque. The servers said it is delivered fresh, from the Vietnmese settlement. The taste, and feel, of fresh noodles as compared to dried noodles, is like comparing the north and south poles to the equator. It is a world apart, and made me almost averse to the dried kind. 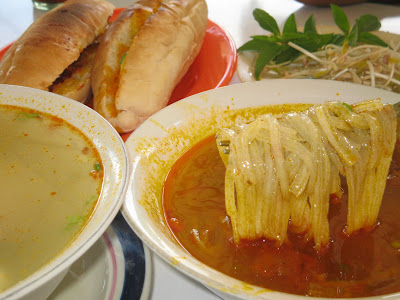 Our hosts' preferred chao long is the beef stew - sweetish soup laden with thin strips of beef long-cooked in spiced broth. The spices, and probably achuete (annatto seeds), render the soup a bright orange hue and infuse it with a rich flavor.

The kalamansi, and maybe a few drops of chili paste, cut through the richness so that it doesn't become cloying. The herbs provide aroma and added flavor, and add a varied texture by way of a crunch.

The pork, plain beef, or buto-buto chao long are the same, except that the soup is clear broth. Boiled egg can be added upon request. The special size is good enough for two if you've had dinner previously, but not that much if eaten on your own. We've had instances when we've had dinner then had a chao long special each about two to three hours later, and had no problem finishing the entire bowl.

The perfect pair to chao long is freshly baked French bread made into a sandwich, Vietnamese style, of course, served real warm. Pork special is the bestseller - the bread is sliced lengthwise, brushed with the beef stew sauce, laden with chopped grilled pork, and spread with a dollop of mayonnaise.

I've tried other variants - chicken and tuna - but the pork special, as indicated by the name, is the special of the lot. The chicken French bread is almost the same as the pork special, with the addition of chopped fresh cucumber. Tuna is spicy hot and dressed plainly in oil, garlic and onions.

Bona's makes good business. The many tables inside the eatery spill out to the roofed front lawn, where we always had our chao long. Service is brisk, and because the chao long and French bread have to eaten while still hot, table turn-over is high, and fast. Barkadas, office workers, drinking buddies, entire families with lolos and lolas and young kids in tow, and even lone diners, troop in at all hours.

Proof that Puerto Princesa chao long and French bread together make for an enjoyable, first-rate meal, any time of the day, any day of the week, rain or shine. It is strong with come back come back. Guaranteed.


Pho Hoa Noodle Soup chain of Vietnamese restaurants offer beef stew noodle soup, called pho bo kho. The small bowl is considerably more expensive (Php173.60) but is only slightly bigger than the special size chao long, though it has some slices of cabbage, chopped carrots, and more beef (chunks, not slices) and noodles. It tastes almost the same as chao long, but the pho or noodles is galaxies away. I'm sure it is of the dried kind. 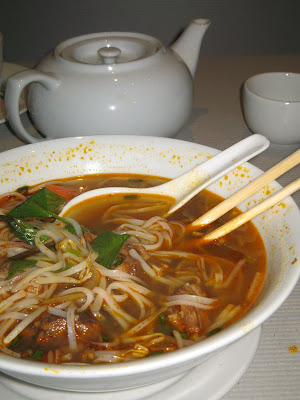 Pho Bo Kho after I have mixed in the basil and bean sprouts. 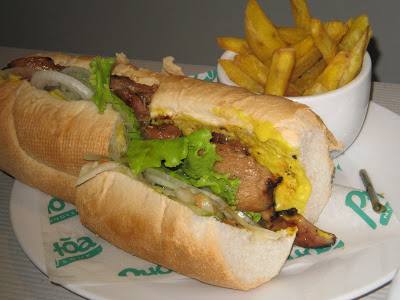 Grilled pork sandwich (php128.80) with a lettuce leaf, cucumber and onion slices, and a mustard-based spread, served with kamote (sweet potato) fries. The bread was tough and chewy, indicating it wasn't freshly baked.

I love pho noodles. Actually, I just made some for dinner 2 days ago.

Oh, good for you! Pho is actually perfect any time of the day now as the rainy season seems to have started.

I am from palawan and I can attest that the best "chaolong" is the one you can get from the vietnamese village located about 9 km away from the city center.

authentic cooked chaolong by real vietnamese than poseur chaolong located in the city center which is a hodgepodge of mami and bastardized vietnamese recipes.

How I wish I had gone to the Vietnamese village! And not just for the chao long but also for the other Vietnamese specialties.

Now that the baby is grown I am definitely going there when I go back to Puerto Prinesa. Wishful thinking!

yummy chao long,.. how i wish, i would have the exact recipe so that i could cook it at home

Yeah I wish I had a recipe, too, to make chao long at home and to share in this blog. I'm especially wishing for the recipe for making those incredible noodles!

I've been to Puerto Princesa twice, and I have never failed to visit the chao-long-an.

In fact, my boyfriend and I were there just two weeks ago, and every night, I will ask him, no plead to him to bring me to Lou's chao long, and every night he would ask me if I won't ever get tired eating it. One time, I even woke him up at 3am because I was craving for a beef stew chao long.

I confess, I'm a certified chao-long addict and one day, I will learn how to make my very own chao long; though for now I would have to convince my boyfriend to bring me back to Palawan be reunited with my chao long lol

OMG! I can totally relate hahaha!

I am from Puerto Princesa and I do agree that Bona's Chao Long is one of the best. Thanks to the Vietnamese people for bringing it in our Country. There are so many Chao Long restaurants in our place but it's Bona's Chao Long that rings a bell because of their affordable price. This is the unique food we can be proud of in Puerto.I miss this food so much!!!

Just browsing along looking for chao long recipe, and saw your post and this: http://outoftownblog.com/chao-long-noodles-a-culinary-treat-from-vietnam-in-palawan-philippines/
I'm finding it odd that some of the things you said in your post appear to be the same/paraphrased in the other blog. Sigh.

To the Puerto Princesa native, thanks for confirming that Bona's is one hell of a good chao long place!

Hi MoniQue, thanks for dropping a line. That happens all the time, people post things copied from other blogs around the web. I should mind, but what can I do? That website is full of ads, and the chao long article was posted several months after my blog on the topic, so I think that's enough proof who copied who.

Guys, is there anyone here knows how to cook palawan chaolong? I'm pregnant and craving for chaolong, please let me know the recipe please