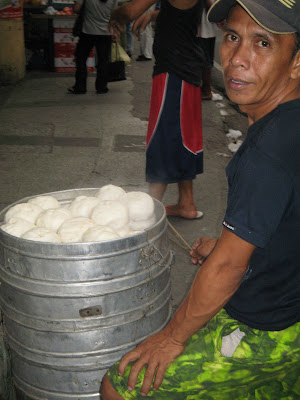 Judging from its popularity, Filipinos love siopao. Any Philippine city with a strong Chinese presence is sure to have its inhabitants, and the citizens of its neighboring environs, used to snacking on the soft, white bun filled with tender pieces of pork stewed in soy sauce and sugar.

Iloilo has been settled by the Chinese, along with other Asian migrants. At this age, there are still pure, 100% Chinese by sanguinity, though they speak the local language.

As such, Ilonggo cuisine has some smattering of Chinese influence, noted particularly in the Ilonggo original pancit molo, which is a soup of wonton/wanton or dumplings.

And at four o'clock in the afternoon, the streets fill with vendors who sit on corners, carting portable tin steamers, or mobile "see-through" cabinets attached to bicycles, filled with newly cooked buns. 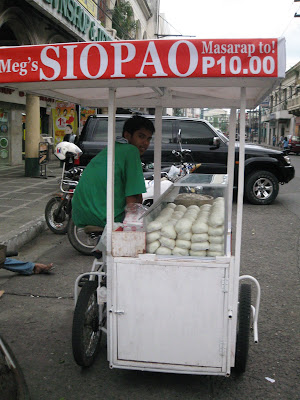 Reportedly, the most famous siopao in Iloilo used to be made by venerable Chinese restaurant Kong Kee, which is considered an institution in terms of Chinese offerings. It is regarded as the "restaurant that siopao built." I heard that until today, Ilonggos who have migrated elsewhere, including Ilonggo celebrities (prominent politicians, judges, senators...), descend on Kong Kee for their siopao fix whenever they're home.

But times have changed. And for the new generation, Roberto's is THE siopao place. Kong Kee and Roberto's are located along the same street in the old district of the city, just by the public market, and are literally a stone's throw away from each other.

But Roberto's started out as a burger joint that Jolibee and McDonald's found hard to beat. When it started selling siopao, it overtook Kong Kee in terms of sales. 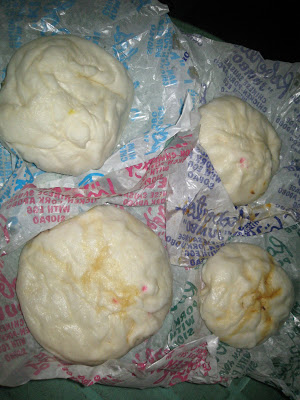 [Roberto's siopao, fr bottom right, counterclockwise: regular, jumbo, king, queen]
I left my siopao fate in the hands of Roberto's fanatics (my Ilonggo hosts for the afternoon), so this is a sort of biased opinion, as I never got to try Kong Kee's. But the moment I bit into a Roberto's regular siopao I felt I have found the ideal siopao, and there was no need to try others.

It was delicious, and beyond compare. And this is a serious declaration, because all my life I had been eating siopao, and would order one if it's on the menu (though mostly siopao are sold in stalls, it being the only product sold).

Printed notices are plastered around the cramped eatery, declaring that Roberto's siopao do not need sauce, as such no sauce is included in the pack (the common siopao is usually sold with plastic tubes of asado sauce). Yes indeed, the siopao filling are moist and saucy enough, and very flavorful, the sauce fully infusing the meats, that no other condiment is needed. 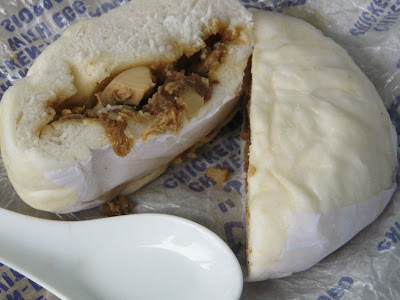 [Cross-section of a Jumbo, Php35]
As we had a full lunch, plus a mid-afternoon sandwich, I went into Roberto's intending to take-out siopao, with no idea as to when I could eat whatever I bought. Photos of siopao plaster the walls, and all tables are busy with the afternoon crowd.

Roberto's makes four kinds of siopao, which I'm covering here starting from the smallest (regular size, similar to the common siopao) and proceeding to the biggest.

I first ordered only the big three (the three largest), but when I came to the cashier I was told there was one missing to complete the set. My Ilongga companion asked what it was, and the congenial reply was "the regular adobo," followed with the question, "shall I put one in?" Anybody who knows me would know the answer to that.

So it was the Regular Adobo (Php25) which I ate right then and there, oozing with sauce and still hot from the steamer. Pinakamasarap na siopao, like no other. All siopao out there, bring them on. This one tastes like no other.

The next bigger size is the Jumbo, which has the same adobo base, plus a boiled egg and Chinese sausage. 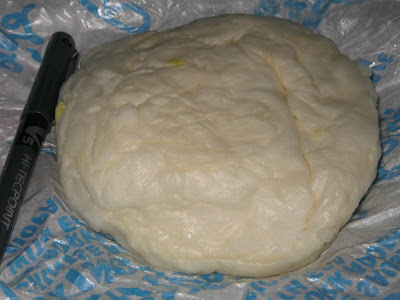 This is the King (Php49), which has the filling for Jumbo added with pieces of ham. It has roughly the diameter of a sign pen. Hefty, and good enough for two. 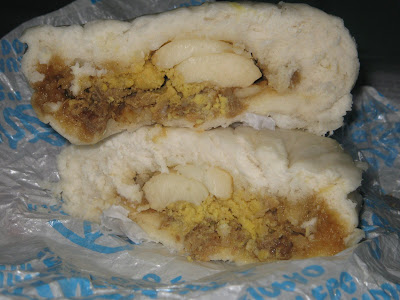 King cross-section, there's a lot of egg in there. 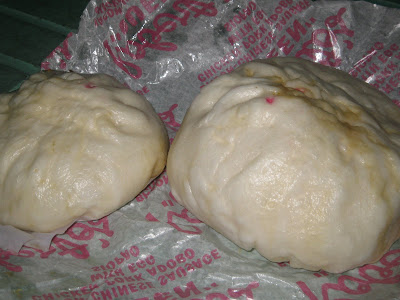 [The Queen dwarfing the Regular]
When I was paying for my purchases, the cashier asked me if I was from Bacolod (he judged rightly that I was not a local, but never knew I came from so far). He turned out to be the owner, Roberto himself. He then told me I should thank my lucky stars, because of all the days that I had to go to Iloilo I happened to be there when the Queen siopao was available. 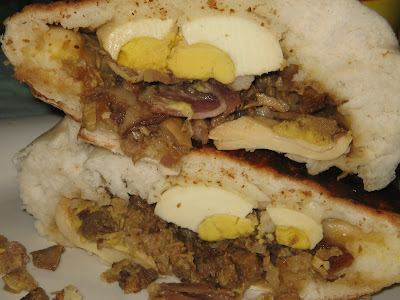 This gargantuan of a siopao is cheap, at Php52, but is only made about two to three days a month. It had the same filling as the Jumbo, plus thin strips of fatty bacon.

It was the heaviest siopao I've ever handled, and the most filled. And the only siopao I couldn't ever finish. Me, who had once been taunted by a date because I had eaten more than he did during dinner. Me, who could easily finish North Park's tai-pao, which had roughly the same size as the Queen.

But on a different vein, it's a bit surprising that the biggest siopao should be a queen, not the king. It clearly reflects the maternal structure of Philippine society. But I'd like to whisper a little secret - I think the main reason for the biggest having been named the queen has got to do with the owner's gender leanings.

As I was leaving the store, Roberto, in his lilting Ilonggo-accented tongue, said "Thank you, 'Day, ha. Enjoy your siopao. Come back often!"

If only I could.

*And so with this post I end the eatables in Iloilo in 24 hours series. I still have about a couple uncovered but sadly, I have no decent photos of the food. The next installments on Iloilo would be about the "bringables."

KAI
I really loved reading this entry. I am also afan of Roberto's sio pao esp the queen and laso blogged about them just like you did. waaah! im craving for the queen now!last time I had one it was already 55 pesos.
Roberto's may not have the ambiance but they still survive and even beat the nearby jollibee and mang inasal.
and i've noticed that the queen is now available for more than 2-3 days a month.

KONGKEE is just right across roberto's and yes its the resto that sio pao built. and until now it is still synonymous wit the meat filled bun.

OTHER NOTABLE ILOILO SIO PAO are

WEWINS- a personal favorite of mine.

Hi Jorp, thanks for the valuale inputs, will have them in mind next time I visit Iloilo. I actually read your blog before I went there.

Not in the near future, unfortunately, but the entire family was in Boracay recently ;-)

Ask any chinese in manila (30 yrs and up, as younger gen not much into siopao anymore) best siopao are emerald garden siopao available only in the mornings, biggest taipao is monte marts in masangkay manila. Cosmos asado and bola bola siopao. Trivia- only in the philippines you can find bola bola siopao, it was the chinese migrants that came up with that variant. Cant find it else where. Lingnam special siopao. For the filipinos its the filling that matters. But for the chinese filling is useless if white bread is not soft and moist. Most chinese dnt use sauce. For authentic cantonese siopao, century seafood, gloria maris, golden bay. If you can fly to hong kong then its another story.

Hello there, yes, I know about Emerald's legendary siopao, and I've been time and again gifted with a piece or two. I've been frequenting Golden Bay lately. I've flown to HongKong, too, and enjoyed the baked pork bun at IFC Mall in HK Island at the famous dim sum place by the subway station. Any leads for when I come back?

I'll hunt for those other siopao you mentioned, thanks!