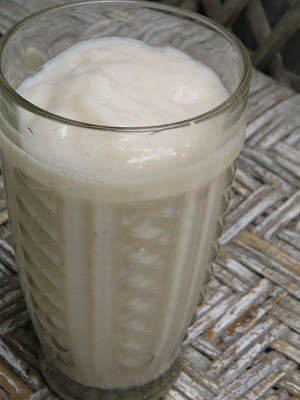 It is the height of travel season in the Philippines. Schools have just closed, there had been two consecutive long weekends plus three more to come, and summer is in full swing. It is the ideal time to hit the beach, which is the most abundant of all tourist destinations, because at this time the waters are warm, the waves gentle, the shallows devoid of jellyfish. And rains will not ruin a trek, or some sightseeing, or a picnic.

And so for the next few weeks I will be devoting the blog to some of the food encountered in my favorite travel destinations. My own travels for this summer have mostly been done with, as I like to schedule my trips during off-peak season, when airfare is light, crowds are non-existent, and tour and transport fees are negotiable.

But I say mostly, for one never knows, truly, what the travel gods have in store. In fact, I'm in the process of planning a few other trips scheduled towards the end of the season.

On a Saturday trip we took the kids to Picnic Grove for the zipline. It was our concession to them – they had been wanting to go back to Danao town in the island of Bohol for the awesome - really awesome - zipline (called suislide) that they had previously experienced. But a trip to Bohol takes careful planning and full command of one's resources – I haven’t yet recovered from the trip financially, mainly because we missed our flight going there and I had to purchase, on horrifyingly bloated prices, seats - for five - on the next available flight.

So Tagaytay was the compromise for peace to reign in the house, and for my pockets to have enough time to be filled again. It wasn't the same - the view wasn't as fantastic, safety procedures were not as strictly observed, but it staved off some whining. At least for a day. Sigh.

On the way home, as it had been a day trip, we dropped by the Mahogany Market and purchased the usual Tagaytay must-haves - fresh beef cuts, pineapples, highland vegetables. 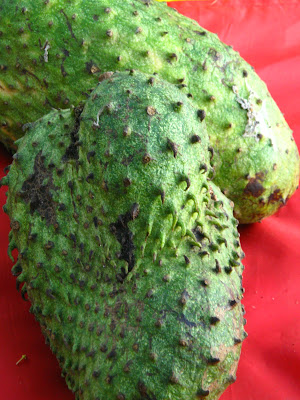 Guyabanos (Annona muricata Linnaeus), known as soursop, guanabana or graviola somewhere else, were selling for Php100.00 per heaping basket, with more or less four kilos of fruit. These are hefty, though, with roughly two pieces per kilo. 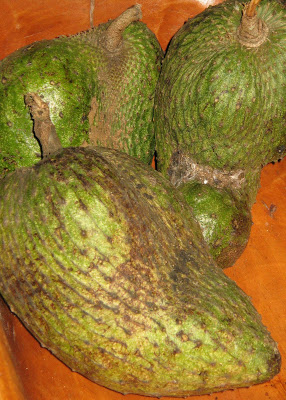 Guyabanos are not abundant in the commercial sense, but I grew up eating them because my grandparents had a tree growing by the side of their house. The fruit is milky-sweet with a certain tang to it, sometimes so pronounced that it tastes sour, that it's not exactly likeable. It is also fibrous and full of large seeds. Its skin is the default example for elementary school discussion of rough, distorted-heart-shaped and bristled as it is. 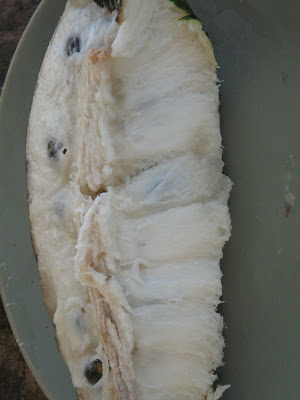 Lately this email message has been going around celebrating the purported powerful capability of the guyabano to suppress the growth of cancer cells. I'm not sure about the scientific basis of this claim, but the considerable amounts of vitamins and minerals found in the fruit is enough to make me buy it whenever it's available.

Like myself when I was still a kid, it's difficult to make my own children eat guyabano as is, so I've resorted to blending it into thick iced shakes, which are the perfect fix for the summer heat. 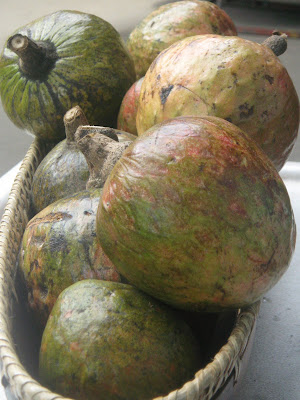 The curious find that day, though, were these anonas (Annona reticulata Linn.), heard of but uncommon and unseen by me in Pangasinan. It is known as custard apple in the English language, which is also the term used for atis (Annona squamosa, also called sugar apple).

The term anonas is actually somewhat generic, as it is the scientific family name in which the guyabano, the anonas and the atis belong. Probably getting tired of thinking of another creative term for another fruit which tastes the same anyway, the name-bestower gave up and just settled on the pronounceable form of its genus.

Unlike the prickly guyabano or the knobby but smooth-skinned atis, the anonas looks like a cross between an avocado and a chiesa in a thickly-veined skin. 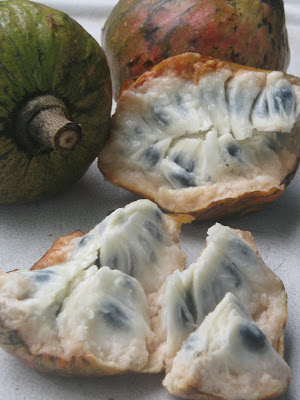 The guyabano, the anonas and the atis all share the same thick skin with a milky custard-like pulp beneath, fibrous segments and large, ovoid black seeds. They also the taste the same, in varying degrees of sweetness and tartness. 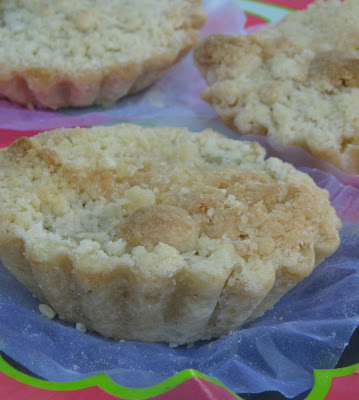 Had the chance to drop by Rowena's once more and bought the correct tarts (fruit, not cheese) this time. I bought the assorted box which had mini tarts filled with ube, pineapple, buko (young coconut), mango and apple.

I say, that crust was incredible. Buttery, crumbly but structured enough, not too sweet, it was delicious, sometimes to the point of subduing the taste of the fruit filling.
Related Posts
Josephine's Restaurant Tagaytay
Bahay Pastulan
Rowena's Cheese Tarts
Sonya's Garden
Mahogany Market

Email ThisBlogThis!Share to TwitterShare to FacebookShare to Pinterest
Labels: out of town, prutas (fruits)

Guyabano - my favourite! Love it with mixed with sugar, some water and lots of ice. Perfect on a hot summer's day.

Hi Ate Celia, you mean like a cold, chunky fruit juice? Must be neat!

i sooooo love the Buko and Ube tarts from Rowena's!