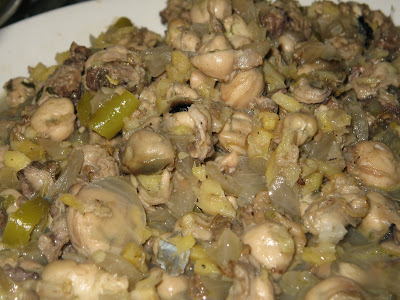 
What better way to end the Lenten season than to hold a poncia?

Poncia is the general term for a party in Pangasinan, but one that is centered around food. It is a party on a grand scale, and as I mention in this blog time and again, it is an undertaking by an entire barrio or barangay – people come to help in the preparation and cooking of the handa, or the dishes to be served, down to the plating and serving, and of course everybody comes during the poncia to partake of the food.

The Tagalog equivalent of the term poncia is handaan, which generally means a preparation, but has evolved to mean a preparation of food to be served, and eventually has come to mean the serving of food during a party, much the same way as what poncia denotes.

A poncia and a handaan both refer to big celebrations usually associated with the sacraments and the practice of one’s faith – wedding, baptism, fiesta, birthday, anniversary of all sorts, commemorations after a death (pasiyam, 40 days, babang-luksa).

There may be a short ritual during the party, maybe some speeches, but the main event is the food and the eating. Because the poncia is traditionally held at the house of the host, tables are usually short so that one has to leave immediately after eating to give way to those still waiting to be seated.

The preparation for the poncia usually starts more than 24 hours before the event. 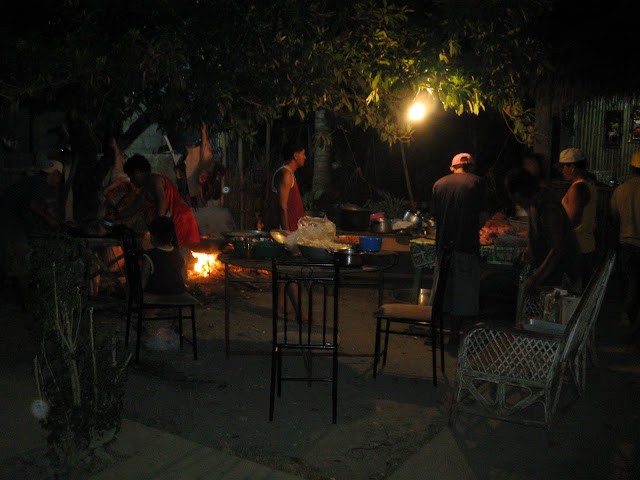 At sundown the pig – the normal beast of choice for the handa, utilized from snout to tail – is slaughtered, dressed and cut up. Big wooden fires are built, first to boil water for cleaning the animal, then to cook the dinner of the volunteers, and eventually, of course, to cook the handa for the poncia. 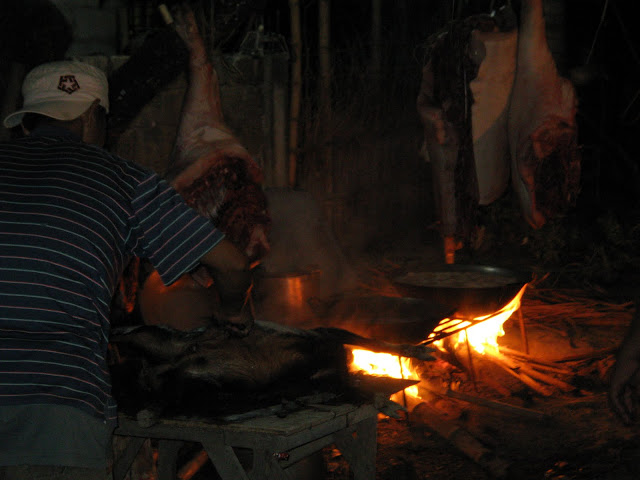 Here after the pig had been cut, a smaller but more preferred animal, a goat, is being prepared for cooking. In smaller parties a goat may be served, but for parties of a grand scale it would be too costly because it is not as meaty as a pig. The dishes that were cooked from the goat meat were served as pulutan (food that accompanies hard drinks) for the inevitable drinking session that follows each poncia.

I love goat meat, while I abhor pork, so I had the goat dishes after the party, which I ate with rice. 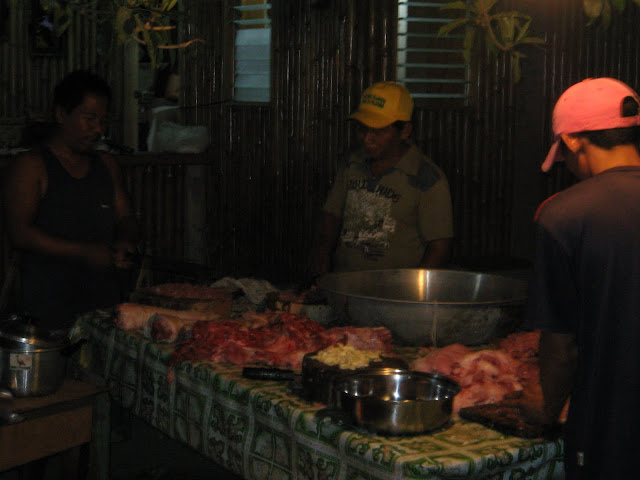 Around midnight the cutting of the meat begins. The constant hammering of heavy knives on large planks of wood is heard for miles around the entire dawn, and this sound is like the tolling of bells that counts down the hours until the feast is served. It is part and parcel of every poncia that I attended in my childhood, so that any hammering I hear makes my stomach anticipate an epicurean adventure. 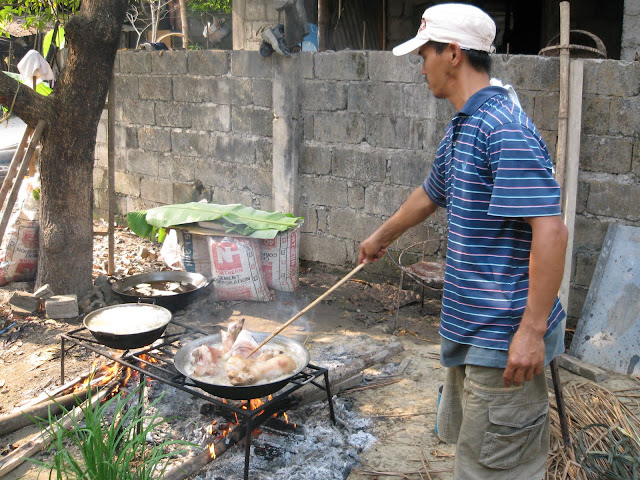 The cooking continues throughout the entire morning, the different parts of the pig going into appropriate dishes. 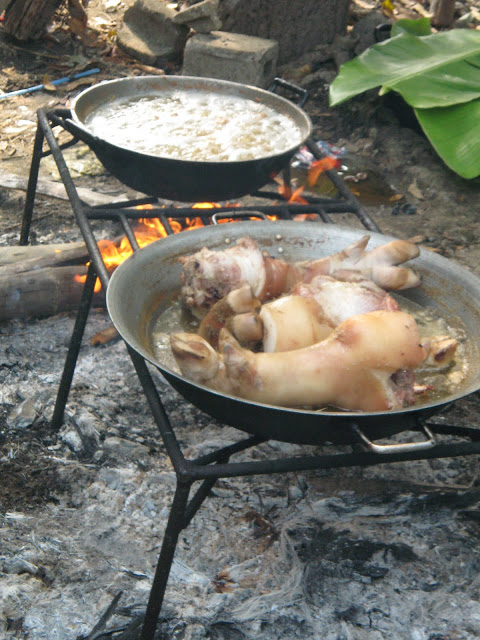 Here the pata – hocks – were being boiled prior to being deep fried to a crisp. However, the host deemed the four pieces of front and hind hocks too few to be served, so it became the “prize” of the volunteer male cooks to take home. 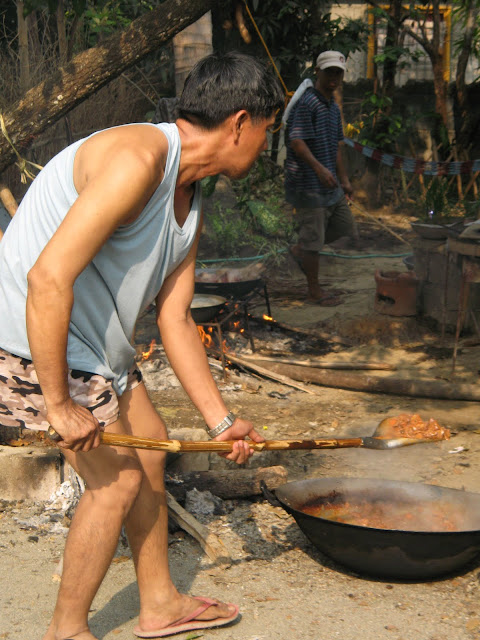 A stew being ladled into a container to be taken to the party venue. The shovel-like size of the ladle and the long wooden handle enabled the cook to skillfully stir the large quantity of meat without being warmed too much by the wood fire. 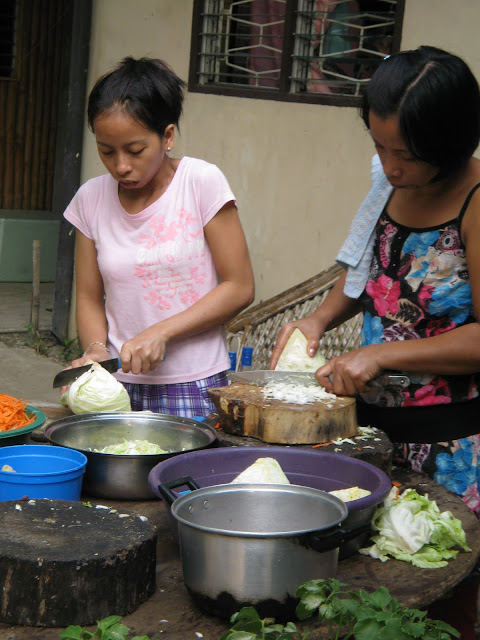 Female volunteers are relegated to the prep work only, and do not participate in the actual cooking. 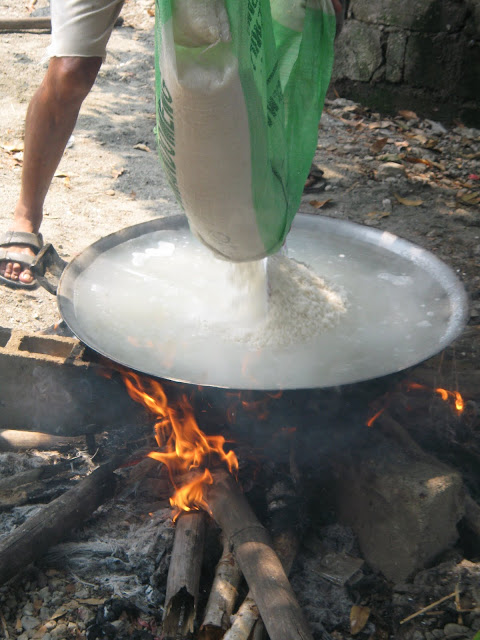 Rice is normally cooked in a kaldero – a thick, steel, cylindrical casserole – but the quantity needed for a huge number of people means employing a kawa – made of the same material but pan-shaped. And huge. 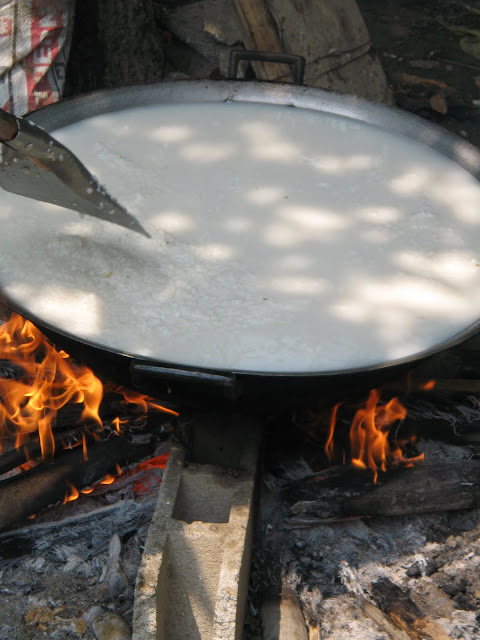 Rice cooked in a kaldero is left to cook by itself. Here the rice is stirred to ensure even cooking. 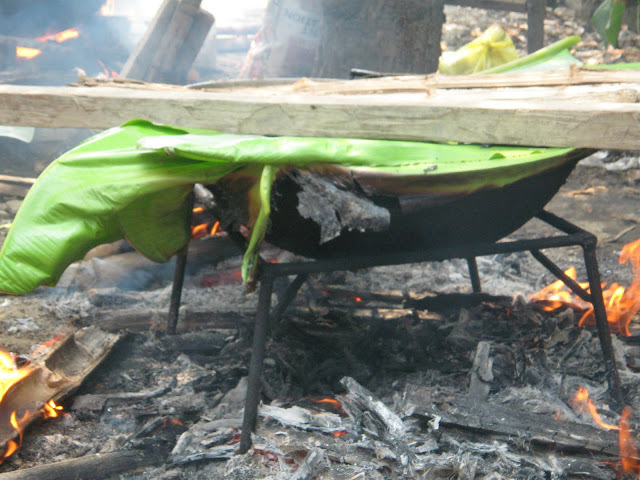 As the rice absorbs the water, it is covered with banana leaves to make it fragrant, then weighted down so the wind doesn’t lift the cover. The fire is dispersed around and banked to embers to prevent water from evaporating, which circumstance would undercook the rice. 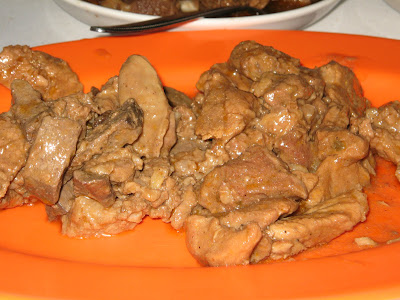 The handa. A dish of igado, a stew of the offals and some meat in vinegar. In this case some tomato sauce was added. 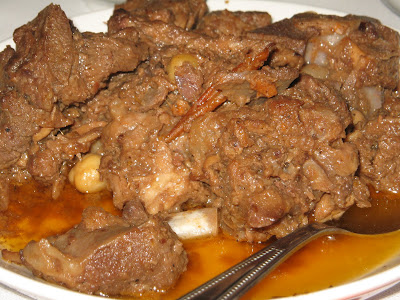 The bony parts, also stewed in tomato sauce, with chickpeas added. There are other dishes like this, which look and taste the same, to me at least. 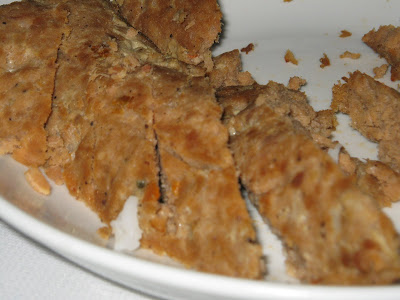 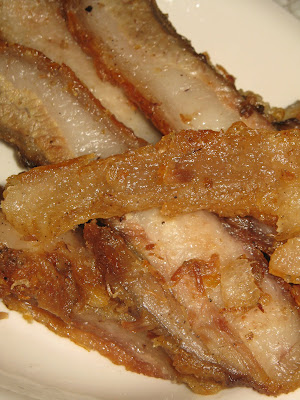 Lechon kawali, pan-fried pork belly strips. In other poncia this is further chopped into cubes for economic reasons. 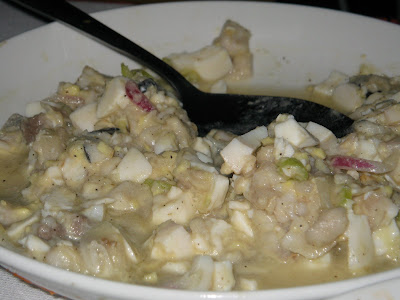 Kilawing bangus (raw milkfish fillets in vinegar, onions and ginger) with mashed boiled eggs. This has been steeping in the vinegar mixture for almost a day, so that the fish has been “cooked.” Nevertheless it (plus the oysters lightly cooked in vinegar, jalapeno peppers, onions and ginger, topmost photo) is a refreshing respite from all the fatty meat dishes. The boiled eggs is not a usual addition to kilawin, but it made the dish “friendly” to those who are not used to eating raw seafood, especially the female part of the population. 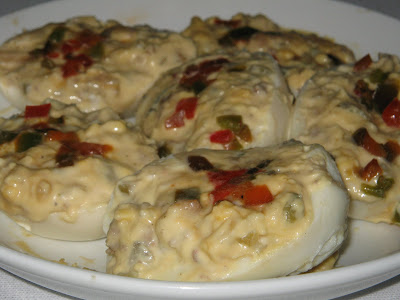 Stuffed eggs. This is not traditional poncia fare, but speaks of the experience of the punong abala or the one in charge of the over-all preparation and cooking, who has spent time in the kitchens of a hotel in Dubai. With all the meat and pork fat, I think it is a brilliant addition to the party spread, particularly since a lot of the guests were senior citizens (the poncia was for a golden wedding anniversary). I’ve read somewhere that an egg contains an element that helps in preventing the absorption of fat that you eat it with in the bloodstream. 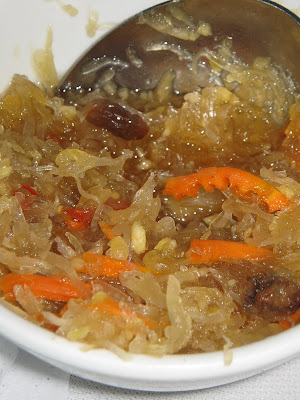 The indispensable side in all poncia - atsara, pickled grated papaya, to cut through all the sawa (taste fatigue) from all the pork dishes.

i seldom go to the province..but when i do i always ask mom if theres a party nearby because i missed the food served in the barrio. LOL. the food cooked using wood has a different flavor esp caldereta!

Thanks. What do you say, I always look forward to attending poncias, too, whenever we go home. Besides the food slow-cooked over wood-fires which I rarely eat so it becomes a treat, it's such an affirming experience watching the spirit of bayanihan at work, and enjoying the camarederie as you mingle with people you have grown up knowing and who know all your ancestors.

Just the way I remembered it from preparation to the finished product..Sarapppp...Oh i miss all these foods especially the igado and caldereta, ummmmm... yummy