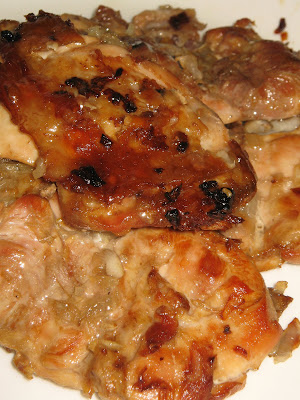 There I was talking about shallots the other week, when the American living the sweet life in Paris, David Lebovitz, whose incredible wit and humor I absolutely adore, writes about a roast chicken with caramelized shallots a few days later.

I have been experimenting with different flavors and seasonings for roasted chicken for years because it's so versatile and very kid-friendly (for my own kids as well as for me being a kid still, though I was a kid myself when I started cooking chicken). So naturally the post interested me, apart from the fact that I got curious about the seasonality of shallots from half-way around the world.

But what got me really hooked on the recipe was that, on closer inspection, the marinade consisted of nothing more than the ingredients - soy sauce and vinegar - for a proper Filipino adobo, which is almost the Philippine national dish.

Well almost....the archipelagic nature of the country makes it difficult for one thing to represent the entire nation. In the case of adobo, it is eaten in the entire expanse of the archipelago, but the variants can be as many as the more than seven thousand islands spanning the country.

And I'm not even talking about the origins of the dish. Its main use in the past was for preserving meats in the absence of refrigeration, but history doesn't confirm whether adobo was created here, or was an adaptation of the Mexican adobado, which was probably brought here via the Manila-Acapulco Galleon Trade (or maybe it was taken to Mexico from here?).

But back to David's roasted chicken. He writes that he adapted the recipe from a book containing French farmhouse cooking. Now how did adobo arrive in France? Or maybe the French originated it?

The original recipe calls for only vinegar as marinade, but David is enamored of soy sauce for its umami angle, so he added some. The Filipino adobo also uses mainly vinegar, with the addition of salt or coconut milk depending on the region, though a large percentage of the Philippine population favors adobo with vinegar and soy sauce, so it's quite safe to say it's the most popular version.

One main difference between the French and the Filipino adobo, though, is the use of shallots in the former and garlic - lots of them! - in the latter. Which makes the French version sweet with the caramelized shallots, while the Filipino variant uses a small amount of sugar to sweeten the dish a bit.

One thing more - the Filipino adobo is mainly braised, and usually eaten with some of the thickened sauce from the marinade spooned over hot rice, while the French farmhouse one is baked dry.

Truth to tell, the adobo taste of the baked version was not really strong because of the small quantities involved (but it's easy to remedy that!), but what's forceful is the sweetness of the shallots. The soy sauce-vinegar served only to enhance the flavor of the chicken and support the savory effect of the shallots.

Which tells me exactly why adobo is a great way to cook chicken, be it in France, Mexico, the Philippines, or anywhere else in the world.

I don't know about baked adobo. I like my good old Filipino pork adobo. Tita Roz