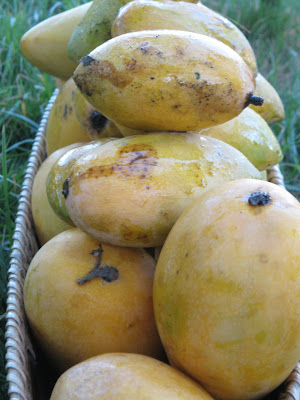 When a lad too much in a hurry to be a man embarks on an adult undertaking and fails, like courting a girl, perhaps, people remark "bubwit pa kasi," an expression that compares the lad to baby mice, which downplays the failure because of youth.

More often that not the bubwit gets contracted into bubut - "kasi bubut pa eh" - the Tagalog term for a budding, or immature, fruit.

These mangoes, though, aren't bubut, despite their size being comparable to bubwit. They are mature enough to be planted and bear fruit, even though they are dwarfed by the common Philippine carabao mango. 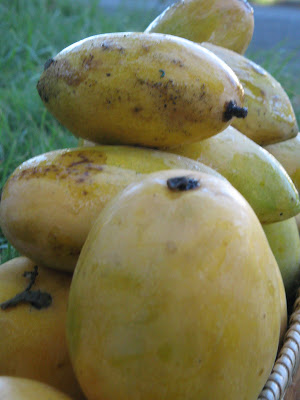 I am told these are called supsupin (that which is sucked) in Cavite, or supsup (suck/to suck) in other Tagalog-speaking areas. This is because with mangoes in this magnitude, you have no choice but to peel back the skin and suck on the pulp until you get to the seed, much as how we eat mangoes in Pangasinan.

Nonetheless, whatever the supsup mango variety's deficiency in mass it makes up for in intensity of sweetness. Just like other fruits, when the motto is the smaller, the tastier, the supsup's flavor is concentrated it's almost like eating pure honey.

In Pangasinan this variety is called bioko, or bioco, a term which we sometimes also use for other immature fruits. We don't call pubescent boys bioko, though, as it sounds a bit suggestive.

Bioko is not as commonly sold around the province as the other varieties, though. I've noticed the same in Metro Manila and other provinces. In Pangasinan there are many bioko buying stations, which then sell the fruits to exporters.

There is a bigger chance of developing rashes around the mouth from the toxic mango sap when eating bioko, primarily because it is sucked on. Nevertheless, itches and burns are minor things to suffer considering the force of flavor. And that's not a bubut thing.
Other Summer Fruits
Anonas/Guyabano
Lychees
Duhat
Aratiles
Avocado
Posted by Kai at 12:34 PM

Kai, you are making me druel with all this mango. I have not seen a yellow mango in I don't know how long. Roz

Apo ka nen Baim lasika. Impanonot mo lamet childhood ko ditan ed Pangasinan. Manililol lak lamet nen anengneng ko tay letrato to tay BIOKO. I remember this event after all the fruit from all the mango trees of my Grandma's backyard and I as soon as they are done harvesting, A day or 2 after I start to search for this treat looking up the mango tree and my Grandma would say? Akinat tangay-tangay ka lamet, singa ka taga Pozurobio. Ha ha LOL :>)

Uncle J., so bioko is not a mango variety but dwarfed mangoes?

Kuwan mo sirin duma may mangan say tawag da et "KUTIMBEW". I was suspecting it's same thing. Thank you for the info. Never the less, Im a big fan of yours and this mangoes.

Uncle J.,
Gee, I'm not even aware small mangoes are called kutimbew anywhere in Pangasinan, though it's perfectly logical. We just use the term kutimbew for my youngest daughter hehehe. Like you, I suspect kutimbew and bioko refer to the same thing. I just have this unending love for carabaos and kutimbews. Mangoes, I mean ;-).