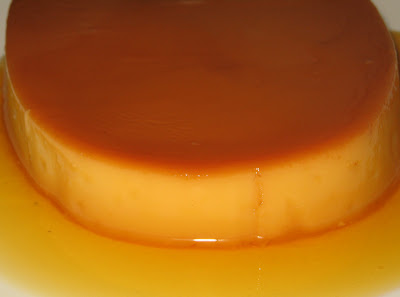 Okay, enough of mangoes. It's all piko and pajo (which in Pangasinan we call pao, accent on the last syllable) now anyway, the cache of carabao variety seems to have dried up at last.

We don't eat ripe pikos as is, but they're good as a flavoring ingredient, especially to pastries and other baked goods, or incorporated in desserts, like mango sago. Pajos we only eat unripe, with rock salt and crushed chiles, or turn into green mango shake.

The dish featured for today is no less sweet, however. May is fiesta time all over the Philippines, and fiestas are usually characterized by excess, with the word itself connoting superabundance.

Leche flan is a simple but rich dessert that's sure to be served during fiestas in the Philippines, made with egg/egg yolks, milk, sugar and caramel. But this leche flan is over-the-top OA, or over-acting - slang for highly excessive. It contains all the yolks from a tray of eggs, plus five more from the five whole eggs added to it, so it is actually a 35-yolk leche flan.

And because I host a lot of parties we usually make lots of leche flan throughout the year. My main househelp makes good leche flan with a dozen whole eggs, a big can each of evaporated and condensed milk and the juice from a few pieces of calamansi, with sugar undiluted with water caramelized at the bottom of the llanera (the oval-shaped tin pan that's used to cook leche flan in) over direct heat.

Steamed, this is the leche flan I prefer over other leche fans I've eaten and bought. It has the perfect mouth-feel - smooth, melt in your mouth, not overly sweet, the creamy, sweet, bitter-sweet, and citrusy notes well-balanced. We usually come up with six llaneras of leche flan from this mixture.

Now there are those who swear by a lot of things when it comes to leche flan making. Some people are loyal to a brand of milk, or to what kind of milk (as to fat content), and some insist on a particular number of egg yolks or yolk to whole egg ratio.

I use canned reconstituted milk because they are easily available, but I use fresh carabao's milk whenever I have the energy to source it out. I have a friend who sticks to eight egg yolks plus one egg because it's the best ratio she has so far come up with from all the leche flans she's created since she was small. There are those who advocate fifteen egg yolks. A TV chef recommends five yolks. There's my dozen comfort zone.

And there's my househelp.

While giving instructions for a recent party at the house I told her I'd like some leche flan for dessert. It was a slightly bigger party than what we normally host, so I calculated we'd need three dozens of eggs and bought the corresponding number of canned milk.

A few days later, however, the househelp told me she had given the matter a lot of thought, and realized that, after many years, we had been using the wrong ratio.

The big realization was that what they use in her barangay (she used to help in cooking for weddings and big parties in her area) is a whole tray of egg yolks.

Now I had two eyebrows raised to that, because barangay events are normally not excessive to that point, nor as luxurious. Feeding hundreds of people means you have to employ practices that disregard fineness and quality, and only concerns getting food to the table and having enough so as not to be talked about the day after. Spending for hundreds of egg yolks is not economical, even downright laughable.

But she was talking to me. We were not going to cook for a barangay, and I was intrigued with the inordinate amount of egg yolks. I also wanted to know how so much yolk would taste and feel.

So I conceded, but I planned on making other desserts to serve, as I knew we won't have enough leche flan for everybody. 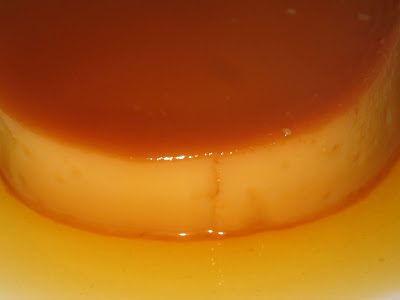 I talked about the endeavor to some friends who also cook, and they were worried the leche flan would turn out tough with all that yolk. So I told the househelp to add in whole eggs as she saw fit.

She ended up adding five whole eggs, or a ratio of one whole egg to six yolks, which wasn't really such a bad idea. The leche flan still turned out a bit tough, though, because she only used a can each of evaporated and condensed milk. The flans were also very thin, because she wanted to make six llaneras of leche flan, but there wasn't enough mixture to fill the containers, so it was apportioned to about an inch high of flan per llanera.

We had a total of seven llaneras of flan for the party. I ended up giving six of them to special guests as party favor, keeping one for the family. I was afraid to keep more - I imagined we'd all collapse from heart failure after eating it.

I think I've had enough of leche flan. For now.

This is my all time favorite bar none. I could eat it continuously. LOL Roz