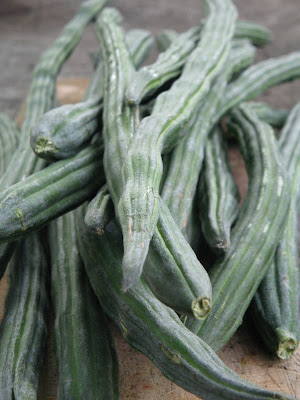 Marunggay (malunggay/moringa, Moringa oleifera Lam) leaves are commonly known in the Philippines as a nutrient-packed vegetable and a very economical cooking ingredient, that I thought everybody else ate the other parts of the tree like we do, as well. That is, until I brought home some friends from my college dormitory in the summer of our freshman year.

The first dinner at home my mom served unripe malunggay pods lightly boiled with bagoong (salted fermented fish paste), and one of my guests bit on a piece and pronounced it hard. I was aghast to find out that she didn't know how to eat it, much more that she didn't know the pods are considered a vegetable. 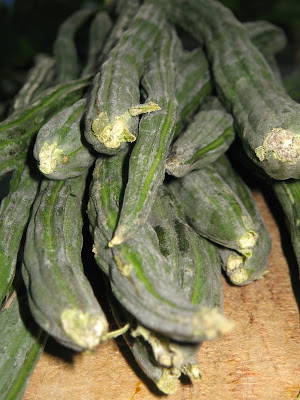 I thought then she was just one ignorant provincial lass, but I soon found out not everybody ate malunggay pods. Even later on I realized that Pangasinenses, and then some, are actually the exceptions when it came to eating malunggay pods. Nobody actually ate it but us, and our neighboring Ilocanos.

Every house has a tree in front, for the household's own use as well as others who pass by that may fancy using the leaves for tinola, or the pods for sinagsagan (boiled with bagoong). Passers by usually just need to holler a request to the owner. An extra request for a kalawit (a long pole fitted with a net or small blade/knife at one end) is needed with the bunga or pods, though, as they usually shoot forth at the top of the tree. 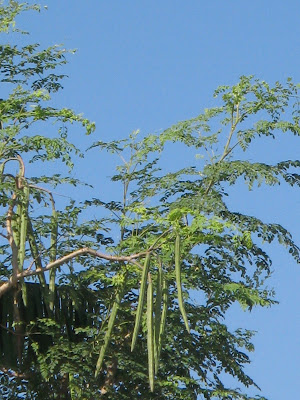 Pods are harvested young/immature, when the seeds are still soft. For the fastidious ones the pods are partially peeled, cutting from one end and then pulling the tough skin all the way to the other end, and repeating the process all around. In our house we don't usually bother - we just cut the pods into pieces and cook them.

For those who are not familiar with bunga's marunggay - eating it takes a bit of manual skill. There are two ways to go about it. First, you take a piece, put it entirely in your mouth, leaving just a small tip protruding outside, clamping your teeth on it. Then hold the protruding tip and pull out the piece entirely, keeping your teeth pressed tight, so the edible, soft pulp gets left inside your mouth, leaving only the now scraped-clean skin. 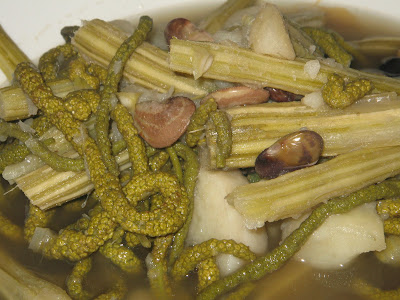 with baeg, patani and kamote cubes

But that's not advisable in our house, as my summer guest found out. The second way is employed when pods that haven't been partially skinned are served. This is actually a bit more civilized - break the piece of pod lengthwise, then scrape the pulp from both halves with your spoon. This is cumbersome, though, and lengthens eating time significantly. The first method is more efficient, besides, and the sucking involved, messing about and skin fibers getting entangled with your teeth are all part of the enjoyment of eating bunga'y marunggay. 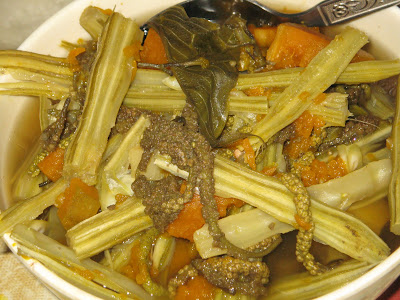 with baeg and kalabasa

Lately I've found out that Cavitenos eat bunga ng malunggay. But they save ignorant folks from the embarrasment of biting on hard pods, for vendors sell malunggay pulp peeled and scraped from the pods. These are sold by the kilo, and go straight to the cooking pan in sautes. 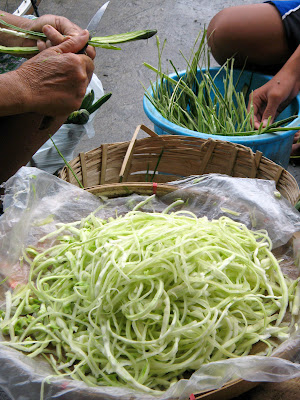 It saves a lot of time, from the cooking prepwork to the eating, but somehow I don't prefer it over the pods. For one, it spoils faster, and I've learned that fruits and vegetables start losing their nutrients the moment they are peeled. But it's just me - I grew up scraping pods, with marunggay fibers in my teeth. 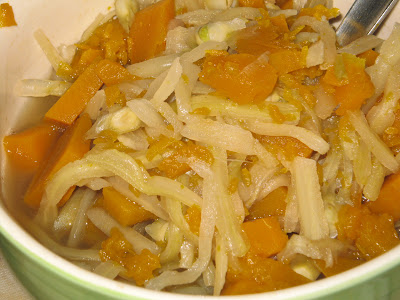 good with squash, or sliced eggplants

I haven't had these veggies for a long time. I still have dried malunggay leaves courtesy of nanay which I used for tinola every now and then but I do miss the bunga and the baeg. I had ham salad baguette for lunch, now I am craving for kanin ang pakbet with these veggies in.

hmnn.. sarap naman. we just finished our frozen malunggay stock last month. I got those fruits from Hawaii because I can't bring here in NJ directly from Pilippines. To tell you the truth a lot of folks in hawaii doesn't know, that you could eat those fruits. With your posting I may ran out of supply to get whenever I will go Hawaii.. Just kidding.. Again mallungay is abundant in the island. On houses that there is a malunggay tree the owner of the house is most likely a pinoy. I like the way you cooked it. I use those fruit also with monggo, green papaya. keep on posting regards bert sison

Ahhh, the lengths we go to just to get a taste of home. I never even imagined marunggay trees abound in Hawaii, and that the pods could be frozen!

I was just at the farmers market in Alemany Blvd. SF/CA yeaterday morning to pick balut, talbos ng sitaw, dahon ny sili at ampalaya and I thought about this blog. Guess what the price per lb. is for the bunga ng malunngay? It's a whopping $6.00/lbs. If I was in Pangasinan the next door neighbor would have just given it to me for free. You're so lucky to have access to it. Aaah, I guess I just miss Pangasinan in general. Thank you for reminding me I'm a Pangasinanese.

Uncle J., but then you have access to other food that we don't even know about. I'm even surprised you have sili and ampalaya, and talbos ng sitaw! We don't have that in Cavite, and it's all I buy when I go home!