Food For The Gods 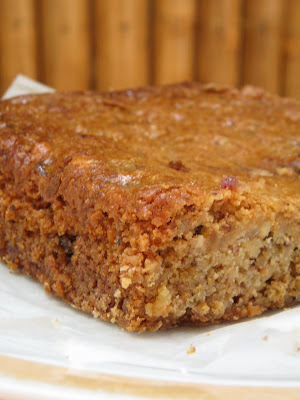 Back in the days when I was young everybody had a member of his immediate family working in Saudi (KSA). That is, everybody excluding me, as my father worked in the country, and my only relative abroad was in Australia. So every other classmate in my class had big baons (snack money) because the riyal’s exchange rate was very high, and they wore branded clothes and shoes, to school.

I don’t know if anybody is still working in Saudi nowadays, though it was only lately that I’ve discovered things from there that I like – chocolate, whose delicate richness is pleasurably astonishing, and quite unexpected. Fine chocolate is European turf, after all.

And cardamom cookies, discovered at the annual DFA Ladies Bazaar I religiously attend. The spice speaks to me, awakening beguiling ancient memories of the desert, whether inherited or imagined I am not sure.

These days, though, gone are the thick gold chains and aviator shades that are unmistakable katas ng Saudi trademarks. For now everybody’s relatives are in Dubai.

While I still can’t claim to be a regular beneficiary of Middle Eastern opulence, this time around I feel a bit on the loop, as I have had four in-laws working in Dubai.

More than that, I have a very close friend occupying a prominent position in a major five-star hotel, a kumare is executive assistant to the CEO of the foremost property developer, my childhood best friend is a nurse in Abu Dhabi, plus innumerable former elementary and high school classmates and college friends are scattered like sand all over the Emirates.

So for the last year or so I have been collecting a fair share of sweet, tacky, dried UAE dates, even though I haven’t been that active in attending reunions.

Donors tell me dates are eaten in gilded hotel lobbies with cheese and nuts. For my Filipino tastebuds dates are too sweet to be eaten like that, while an elderly in-law likened them to sweetened kamote.

Generally dates are not known in the Philippines, and I’m sure not a lot of people know that a pastry popular with Filipinos is made with the fruit prized in Arabia.

In the country, date and walnut bars are called food for the gods, and almost any bakeshop or any enterprise that produces baked goods sells it. It is available year-round, but it is a favorite, rich gift to give special people and is also a coveted thing to put on the holiday table during Christmas.

It is Christmassy, with the lavish richness of butter and molasses made exquisite by the dates, and the crunchy embellishment of walnuts. Regardless of its pagan moniker, it is a luxurious thing to munch on with salabat, tea or coffee, while waiting for Simbang Gabi (midnight mass on Christmas eve), or perhaps serve as a sweet ending to media noche (or noche Buena). It is also very festive to serve food for the gods to callers on Christmas morning.

Among all the food for the gods available in Metro Manila, my favorite, so far, is that of Mary Grace Kitchen’s. But with all the dates I’ve accumulated with no better idea of what to do with them, I’m baking my very own food for the gods this Christmas. So if ever you find yourself in Pangasinan and somehow find my husband’s family home where we’ll be spending the holidays, expect to be served the pastry.

But if you can’t and think it’s not worth the trouble, and you can procure good dates easily in your area, or maybe you have many friends in Dubai, too, then I’ll share the recipe for a very good food for the gods version with the qualities that I like - crumbly but still moist, the sweetness a bit bashful to let the flavor of the dates radiate in every mouthful.

I actually went through several recipes for the better part of the year before I found this one. Recipes abound in the internet, and I also have a dates recipe book that came along with a stash of good quality dried dates from the hotelier friend. They essentially require the same ingredients and employ the same procedure, differing only in the amount used for each item. 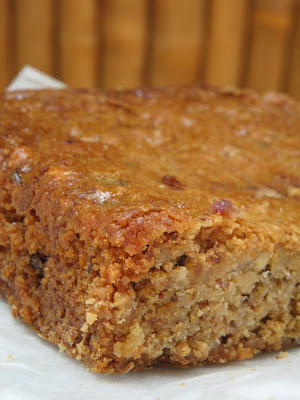 The food for the gods that resulted from a recipe in The Maya Kitchen’s The Complete Guide to Baking was the best I’ve tried, seconded by the people who've sampled it.

I just made a few tweaks to it, like increasing the amount of dates and finely chopping it so it is evenly distributed. I also had a half-full can of mixed nuts that had been forgotten, so I used it up instead of pure walnuts.

The househelp went overboard in chopping the nuts and nearly ground them (in a kitchen-sized mortar and pestle), the nuts becoming almost powdery, but which was a good thing because I think it was the main reason the bars didn’t become limp and gooey-soft, but had just the texture that I like - a crumbly brownie with a slightly fudgy center.

Luxurious, caramelly and buttery, which you can tailor to your own taste. This is my Christmas gift. Truly fit for the gods. And a worthy present for my God.

Email ThisBlogThis!Share to TwitterShare to FacebookShare to Pinterest
Labels: from around the world, malamis (matamis/sweet)

Kai, that looks so good. Have a Happy Holiday season. Maliguyan Pasco. I know this is spelled wrong but I tried. Roz