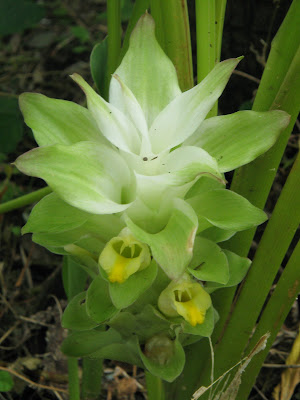 So the Christmas season is upon us, and a surprise awaited me at the onset of Advent - this bloom that had suddenly sprouted amongst the small "grove" of turmeric beneath a coconut tree.

I had inserted (insukit in Pangasinan) into the loose earth some broken thumbs of luyang dilaw that had shrunken like a lola's fingers about a year ago. I had been trying to grow edible things in the property we're currently residing in because ours had the biggest lawn around, and I wasn't about to lie down and not take advantage of it.

My kids had told me to plant kalamansi, so I don't have to buy kilos every week for our daily juice and whine when the price shoots up, and fruits and vegetables for the same reason.

We'd been drying out fruit and vegetable seeds under the sun, and the damned things just sprouted out without being planted, and now they're crawling all over the backyard. My oregano is so lush my kids could have cough and colds every day for all it cared. We'd been regularly having pandan-flavored drinks from the one plant that had survived from the three I had uprooted from the neighboring yard. But a lot of things had died out on me, too. My kalamansi dried up, and the eggplants, okras and tanglad (lemongrass) didn't prosper, and my siling labuyo had been ordered uprooted by the husband (without telling me and not admitting to it when I confronted him) because it blocked the driveway.

Two papayas had gone on to be taller than me, but they were bearing too many flowers that I was told to "circumcise" them.

Apparently, a blooming papaya is a male, and it has to be cut somewhat (where?) to make it transsexual in order for it to bear fruit. Though somebody else told me, when I was growing up and was still innocent on the ways of the birds and the bees, that a female papaya needed a male one (the flowering one) nearby so it could produce fruits.

Now that I am somewhat knowledgeable on the issue of birds, bees, and flowers, I didn't expect that I would have to progress to the cut, German or otherwise, as well. I don't know the first thing about circumcision, whether for a boy or a tree, but thankfully I didn't need to learn how to when both trees were uprooted during the last two violent typhoons that ravaged Cavite.

So I watched with glee the flappy leaves that broke out of the soil from those shriveled ginger I buried. For a time the leaves disappeared, and I was afraid they had been ordered uprooted, too (no, I didn't confront the husband this time). 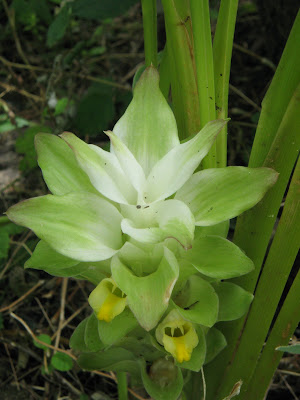 And it was such a pleasure to see such big leaves grow back, though about a few feet away from where I planted the dilaw that I first doubted they were from the same plant. But I uprooted a leaf, and it had an orange, smells-like-wet-sock root, which made me realize they had been breeding underground all this time.

And the reward of a flower is so sweet, even though there's just a single one. I didn't even know ginger bore blooms, and this one looks very ornamental. I just hope it won't require any, ahh, cutting. I'd be happy if it turns out to be a hermaphrodite.

Kai,
Turmeric has many uses, my friends from India recommend it for cooking and medicine. The Ayurveda has a lot of recommendations. One I find very interesting is to use a small amount a tsp. or less in soups to make it look like it has fried ingredients, buttery in appearance ergo delicious but non-fattening.Mangan tila!!!

Hi Kai,
have been following for Blog for since last year but this is the first time I commented. enjoy reading you blogs as I am also a food enthusiast. Turmeric is a sturdy plant...you can harvest it as soon as the leaves start to wilt. You will be surprised that new plants will grow the next cycle.

Flipster, so it takes the place of atsuete, cool! The reason I planted some was because the price in Cavite gets so high most of the year, and when I brought home to Pangasinan for the elders they planted the rhizomes so they could have steady supply for "juice." Apparently they boil the ginger and drink up the infusion, for hypertension and other diseases.

Lea, thanks for taking the time to leave a note. So now I know when they look like they're dying I should be harvesting them!

It's a beautiful plant. I like flipster's idea to make something look more yummy without adding inches to the belly ;)

Must go buy some tumeric now!