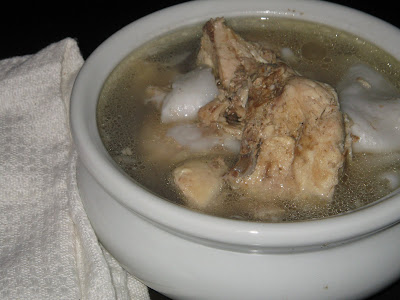 The mother, and the entire family, of my friend and Bacolod host for two trips now is a veritable source of information on Negrense food and traditions. She recounted how baye-baye is made in the countryside, and explained what distinguishes a good one from one that is ordinarily made (it’s all in the toasting and grinding).

She pointed out where best to sample things, bought and offered cassava puto for us to try, and allowed me into her home to see her kitchen.

Best of all she shared a recipe for what she says is the original/traditional binakol. Or not really a recipe, but the process of making it.

Binakol is a popular chicken soup that uses coconut water and coconut meat, providing a dimension of delicate sweetness. The Negrense version, which might be the original one, though in these things one can never be sure, is absolutely no-nonsense simplified so that it might be its original form when it was conceived during the prehistoric hunting-gathering era. 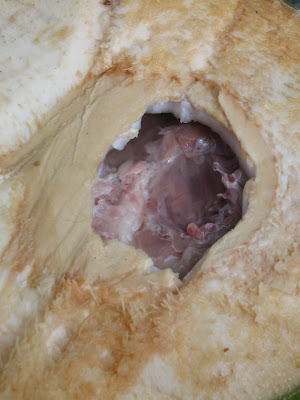 For the way it was described to me, it is as primitive as it could be. Chop up some chicken, slash open a young coconut at the top, drink up half the water, insert the chicken and put the top lid back, build a bonfire with the coconut in the middle, and wait til the shell has turned black all around. That there aren’t anymore green patches is a good indication that the chicken is cooked.

And I said, huh, that’s it? no ginger? or tanglad? (since the tamer lemongrass is more often used in Hiligaynon cuisine than the more biting ginger). No. Not even salt or pepper? Not even. 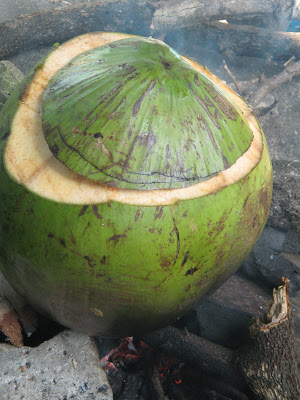 So I can imagine a leather-loin-cloth clad Ilonggo who just caught a wild fowl climbing up a coconut tree and getting a young coconut, slashing it open with a sharpened piece of flint, gathering fallen dried branches from all the trees around, and cooking the chicken inside the coconut shell with the water for good measure. And having a feast with whoever he shares a cave with afterwards.

But back to the present. Cooking binakol the primitive way is right on for a night at the beach, where coconut trees abound, and a bonfire sets the spirit for guitar-accompanied singing and convivial story-telling.

But it is equally fun to do at home, though it requires a bit of lawn space, and some wood. Coconuts are easy to procure in any town, whether climbing up a tree in a neighborhood or buying at the market or at any roving coconut cart. 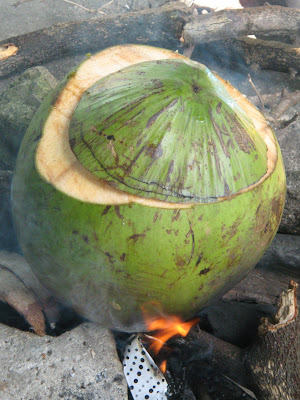 We have several trees on the property where we reside, which bear coconuts year-round, but it is quite difficult finding someone to climb one up. I didn’t want to use those long poles with blades because a falling coconut might result to a broken kernel, rendering it useless for binakol. So I just bought a big shell from the cart just outside the gate to our village.

It would have been nice for a bonfire, with the kids around toasting marshmallows and feeding little twigs to it, under a star-studded sky. But it had been raining the past few days, so we didn't have any dry wood. And it seems people in Cavite don't cook with wood anymore, as I couldn't find any firewood for sale. 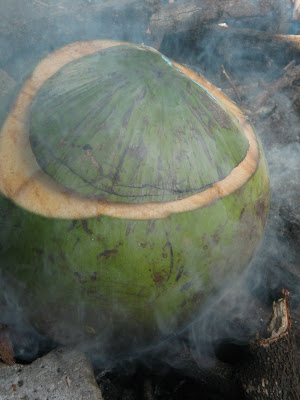 So instead of a big bonfire all we were able to coach out was smoke, and smoke, and still more smoke, while a little tongue of fire licked the bottom of the coconut shell until it had burned out a little hole through which the soup leaked. But the soup had not even boiled yet. 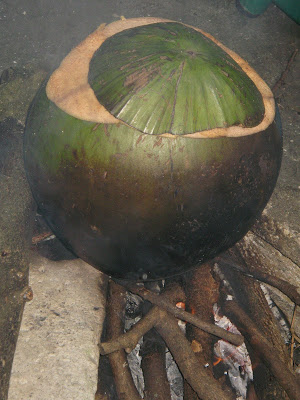 I knew when I had been beaten, so I poured the contents of the coconut into a pot, scraped the meat, poured back the excess coconut water I had taken out earlier, and finished cooking the chicken atop a gas stove. 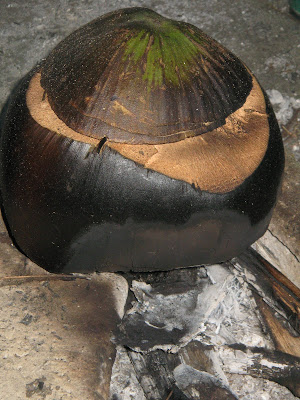 We had a late dinner that night, but man, oh, man, was the binakol something! It tasted so rich, which came as surprising from a dish with just two ingredients. It was all essence of chicken, with a delicate sweetness that complemented the chicken so well. And there was depth of flavor that was so amazing. Amazing.

I was half-expecting a hint of bitterness in the soup, as someone commented in my post on unda-unday that cooking coconut water renders it bitter. But no, it just gained a rich creamy perspective, like cream, or gata, and underscored the sweetness a bit.

So now I know simplicity, is enough.

Previous Posts on the Food of Bacolod
Calea
Burgos Market
18th St. Pala-Pala
Aboy's Restaurant
Inasal at Manokan Country
Cansi at Shopping
The Baye-Baye of Bacolod
Batchoy at 21
Posted by Kai at 8:21 PM

I havent tried this yet! Looks like an interesting way of cooking meat