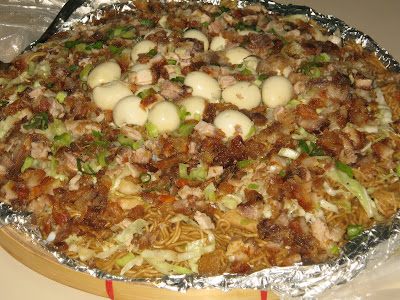 Pancit - noodles, but generally it refers to stir-fried (guisado) noodles - is, I think, the most influential legacy of the Chinese to the Philippines.

Of course, I'm biased because I love pancit. And furthermore I love to eat. But go to any major city in the Philippines and there will always be a panciteria (a hole in the wall that serves mostly stir-fried noodles). Not just that, all towns, even 3rd class municipalities across the country, each has its own panciteria in the public market or along the main road.

The Cagayan region is no exception, but it actually stands out because it offers pancit distinct from the rest of the archipelago's. 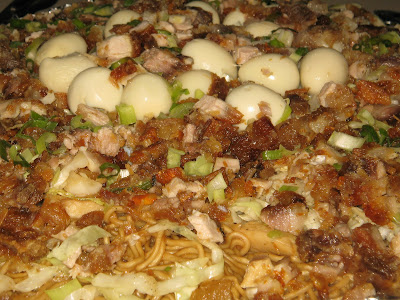 I think the more popular is Pancit Cabagan, which originated in the town of Cabagan in the province of Isabela. It is stir-fried local miki (thick fresh egg noodles) heaped with a ton of chopped lechon karahay, or pan-fried pork liempo (belly), chopped cabbage, sliced spring onion, and topped with boiled quail egggs.

Coming right from the airport I came upon a large bilao of pancit Cabagan in our office in Ilagan, the capital of Isabela. To me it didn't look like a bilao of pancit with lechon kawali - it was lechon kawali with pancit, teeming it was with the crunchy pieces of pork that I almost asked for rice. 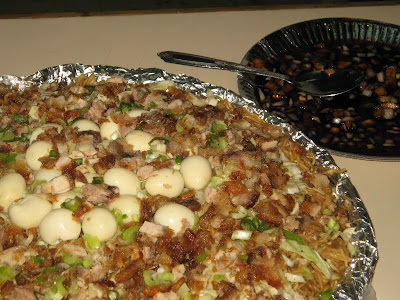 And I knew I was right - because the pancit was eaten with dollops of that mix of soy sauce-vinegar-onions that always accompanies tokwa't baboy. In Isabela, the tokwa was replaced by miki.

And don't boiled eggs accompany lugaw at tokwa't baboy, too? So maybe I should have asked for rice, after all, to stand in for the lugaw. 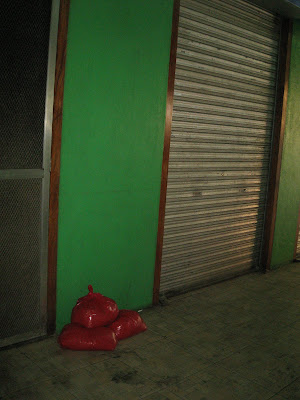 Waking up early one morning to explore I came upon waves and waves of fresh miki being dried under the sun in front of a store, and I realized Cagayan miki is a staple in the region. I regret now that I forgot to buy some to bring home. So I could try it with other things besides pork.

Another morning while going around Tuguegarao City I passed by the still shuttered doors of a restaurant, and waiting just outside on the floor were plastic bags bulging with fresh miki, presumably delivered early by a supplier.

Tuguegarao has its own pancit, called Batil-Patong. The name is a combination of the Ilocano words batil, which means to beat or to whisk (like in eggs), and patong, which is to put or place on top of.

And it is a precise term, illustrating the mixing of the stir-fried noodles (batil) and topping it with a myriad of ingredients (patong).

I went inside a carinderia in Tuguegarao City at 7 in the morning to try batil-patong, because I had a morning flight and I didn't want to leave the region without having tried the pancit. But I was told the toppings weren't ready yet.

Not to be hindered by such an obstacle but not wanting to miss my flight, either, I went to the place I knew was sure to have the pancit so early in the morning - my hotel's in-house restaurant. 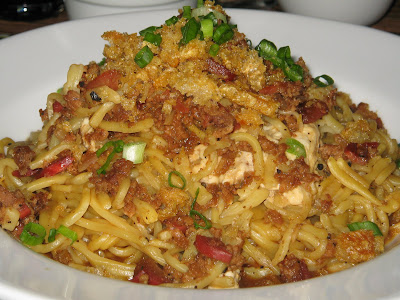 The pancit batil-patong I had was heaped with a host of toppings - pork in various incarnations: ground meat, crumbled chicharon, sliced hotdog, sweet Chinese sausage. I felt like eating the left-over breakfasts of various people that someone mixed with stir-fried miki.

Especially since there's a surprise - a well-done sunny side up egg is hiding beneath all the toppings, which further convinced me that I'm eating breakfast, er, left-overs. But then what was there to complain about? I was having pancit for breakfast, after all. 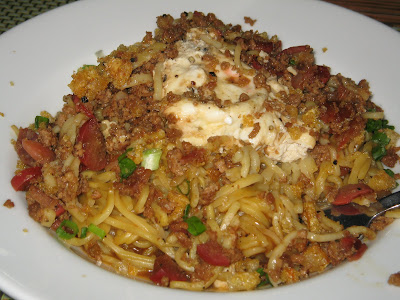 And as if the myriad of toppings and the egg weren't enough, there's still a host of condiments to mix in - chopped white onions, kalamansi, soy sauce, vinegar, ground black pepper. 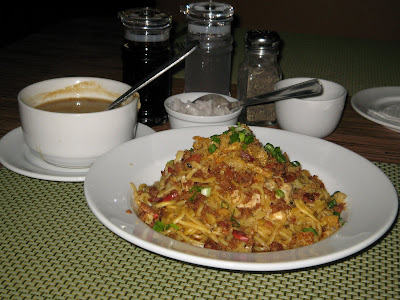 There's a cup of thick soup, too, which goes with an order of the noodles. It tasted like it was the excess liquid in which the pancit was cooked, like pure soup lomi, and I think it's served separately so the noodles don't turn soggy.

It was good, but it became a bit cloying with the pancit and all approximating each other's taste.

Which became my greatest problem with the batil-patong - there was an overload of the meaty taste that the kalamansi and vinegar both could not conquer.

And it was the biggest difficulty I encountered during my entire trip to Cagayan - it seemed everything that was there to eat, for breakfast, lunch, dinner, and even the snacks in-between, had to contain a form of meat, that at one point I had to ask somebody at the hotel to saute a can of sardines in tomato sauce for my dinner.

I had expected, knowing that Cagayan is a quasi-Ilocano country, that vegetables would dominate offerings there. And there would be fish, because we always had deep-sea fish during my family vacations in Isabela. How wrong I was, because I failed to take into consideration that the region is separated from the Pacific by a mountain range.

Nevertheless, all was not lost, because I found awesome peanut bars, and my companions in the trip found a grill bar on our last night in Tuguegarao that offered fish, and just before my flight I was able to buy some vegetables vended along the downtown sidewalks.

And it was fine, since no matter what, I still love pancit, and I'm glad I had the opportunity to experience Cagayan's version.

i just love the way you tell these stories about far away places.
-lou