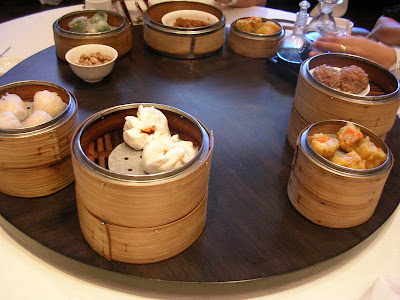 This is my kind of indulgence. I'm a veteran of buffets all over the country, but over the years my constantly expanding flesh has become weak in spite of my willing spirit's steadfastness. And after decades of buffet eating, there seems to be nothing more that can surprise, and allure. I now prefer this focused dining, more enjoyable and more relaxed than the frenetic, frenzied gorging that characterize buffets.

This is not a buffet - for a fixed price, one can have unlimited servings of dim sum of your choice from the dedicated menu of New World Makati Hotel's Jasmine Restaurant. It is served table-side, so you get to sit down in full comfort and, with the restaurant's lavish Chinese art-deco interiors, style.


The promo includes choice steamed dim sum, to be chosen from a roving cart like in many Cantonese restaurants, with baked and fried dim sum,  two choices of congee (fish fillet, pork with century egg), and desserts served upon order. A round of iced tea completes the meal, but we usually prefer the house tea served in a pot.

When I was there with my two older kids (children above two years old pay the same price) and friends on a Friday it was full-packed, with functions going on in the private dining rooms, so the servers were a bit harried. Some of the steamed dim sum listed on the menu were not available in the roving cart, so we ordered. They were never served, and there was some delay in the serving of the fried and baked dim sum, and some orders were doubled. But these incidents were more than made up for with profuse apologies from the servers even without our raising them up, and we were given several rounds of complimentary fresh fruit juices and bowls of ice cream for the kids as a way of making up for the shortcomings.

We would not have demanded any, and we would have come back, and we would, in spite of what happened and probably because of the way it has been handled. This is the kind of service that does not exist and cannot be expected from other a la carte restaurants, much less from buffets. 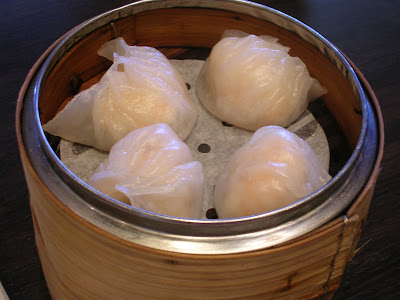 But aside from the noteworthy service, the food is worth going back for. The har gao was what initially impressed me at Jasmine. I am happy it is included in this promo, for it may be the best dim sum  here. The translucent wrapper that is chewy and possesses bite offers a tantalizing peep into the fat, succulent shrimps it is burgeoned with. 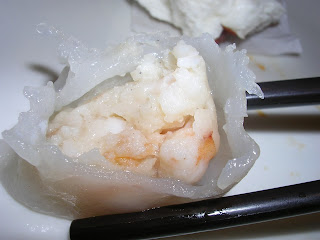 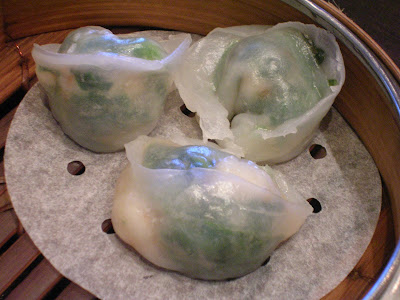 ﻿The same wrapper is used for the vegetable dumplings, which ensconce chopped kuchay (Chinese leeks) interspersing with the corpulent shrimps. 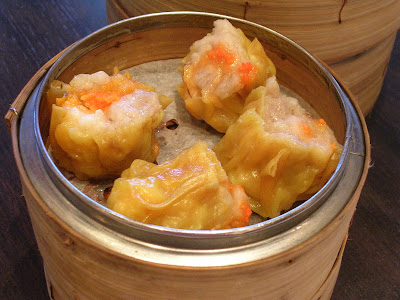 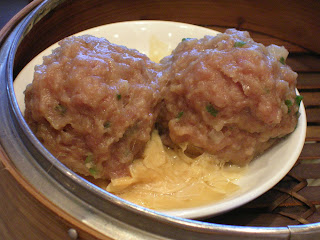 The shao mai and the minced beef meatballs are satisfactory, but compared with the shrimp dumplings, they descend into the ordinary.


When the orders were on the table the kids, Filipinos to the core that they are, asked when the rice would arrive. I said never, as rice is not included. They groaned, and I understood them, as for most of my life I had believed that a meal would be impossible to eat without rice.

A friend has recently been invited to Gunagdong for a week, and he observed that in all the meals he was presented with (everything was pre-ordered), rice was nowhere to be found. We all know China is a rice-eating country, and we were lucky to have known fried rice from Chinese cuisine. But my friend's hosts explained that rice is usually considered a filler, or extender, and so for esteemed guests various kinds of dishes are offered, but not rice. 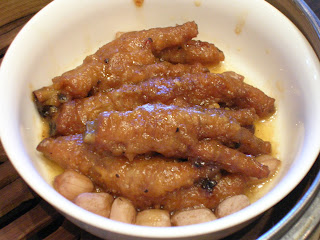 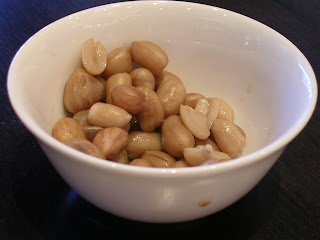 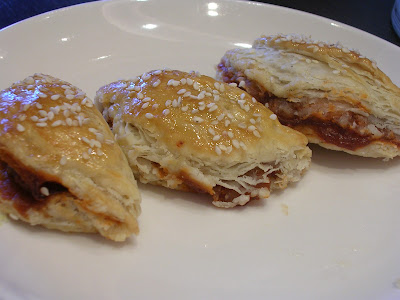 The barbecued pork pastry had the same filling that dyes the steamed pork bun (more popularly known as asado siopao, mini), but I found the flaky, crackly crust to be more attuned and a complementary receptacle  to the sweetish, spiced pork. 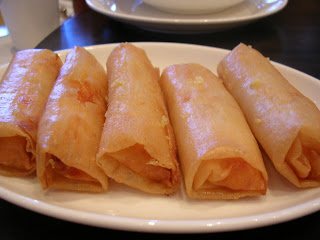 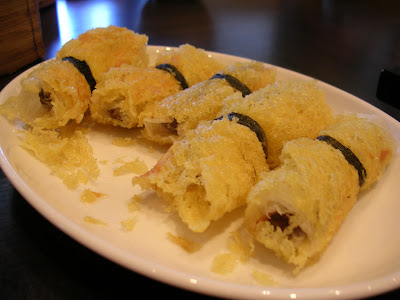 The wagyu beef and mango roll recalls Westernized Japanese maki, until that eggy wrapper explodes and crackles on the first bite, and then it transforms into the sentimental egg rolls of childhood, now grown up and filled with the surprising mix of tender meat rippling with fruity sweetness. 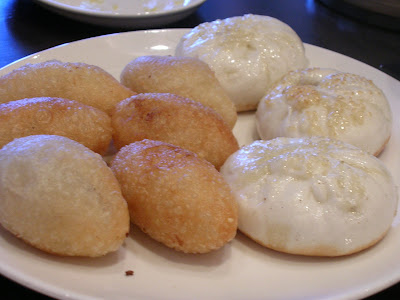 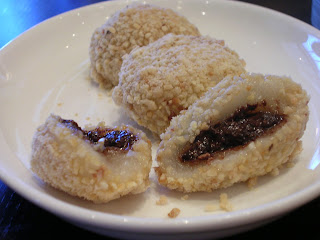 Dessert is traditional Cantonese, but a notch more sophisticated and fused with trendy flavors. Here, dark chocolate is the molten core of glutinous rice balls rolled in powdered peanuts. 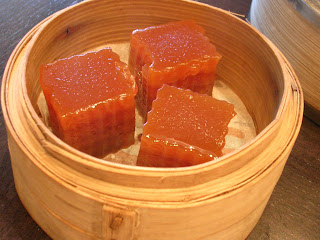 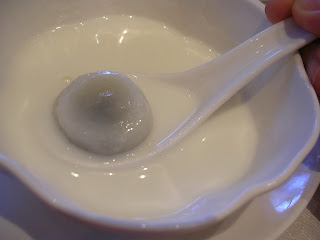 Email ThisBlogThis!Share to TwitterShare to FacebookShare to Pinterest
Labels: from around the world, poncia (handaan/party), restaurants, sira (ulam/viand)

When will you bring me here? Saliva dripping. -- your Guangdong friend

Yeah it would be fun to compare it with your Guangdong experience. We have until the end of June....