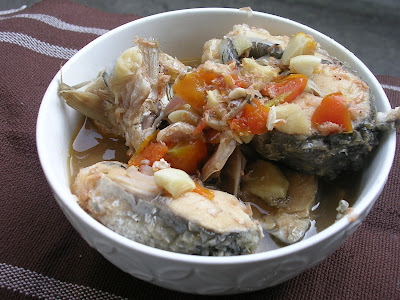 It has been very difficult waking up these unbearably hot days. I want to lie in bed to avoid the heat. But if I stay in bed the air I breathe gradually mimics the inside of my oven during baking season - not now, I can hardly mix batter, let alone fire up the range - as the sun climbs up the sky.


But one sure thing that gets me up and about is impangat - which is probably equivalent to the Tagalog paksiw, though I'm not really so sure. In Pangasinan we call fish stewed in vinegar and select seasonings and spices impangat. The scales of the fish are not scraped off, and there is ginger, garlic, whole peppercorns, bay leaves, siling haba, and optionally a drop of cooking oil.

To tame the sourness of the vinegar, particularly if using delicate fish, we add sliced tomatoes. And then, to incorporate a salty, umami component, agamang - salted krill commonly known as bagoong alamang - is also added. Sour, sweet, salty, garlicky, the smell induces salivary glands to go on overdrive.

I understand that for other people I may be talking about at least two dishes at once. For I know that in the Tagalog region fish stewed in vinegar is paksiw, while fish stewed in sour fruits - sampalok, kamias, tomatoes, green mangoes, batwan, kipil - is called pinangat, or pangat for short.

In Pangasinan it is baliktad. Fish stewed in vinegar, sometimes added with soy sauce (which I know is already adobo, it's endless!) is impangat, the im prefix serving the same purpose as the in in the Tagalog term. Also pangat for short. But anything soured with fruits is sinigang, and is never called pangat.

So my impangat ya bangus is hybrid, but it is impangat because the main souring ingredient is vinegar, the tomatoes serving only to temper the acidity and to provide a fruity, sweetish aspect.

But here's another conundrum - pangat, or paksiw - fish stewed in vinegar, just to be clear, is a means of preserving fish, invented here in the tropics during the days before the invention of the refrigerator. With the addition of tomatoes the dish' shelf life is shortened, as tomatoes spoil easily.

With all these issues my brain cells have heated up and I have rendered the reason I wanted to write about impangat, which is because it is refreshing that it gets me through the day, useless. Impangat is one of a few dishes I like at room temperature better rather than smoking hot, and somehow the sourness - even sometimes bracing, without the tomatoes - refreshes and cools.

I also prefer pangat cooked the day before, so it has come to embody the connotation of the word - pangat, short for pangatlong init, referring to a dish sold in eateries that is not freshly cooked but reheated several times already. But Filipinos know that anything cooked with a sour ingredient becomes better as it is reheated the next day. So we cook big batches of sinigang, and adobo, and paksiw, hoping there are leftovers to reheat the day after.

It has been observed that pangat, or paksiw, is popular Filipino breakfast fare. That is probably because the fresh fish bought the day before is stewed in vinegar, to be eaten the following day. But the family could not wait til lunch to eat the paksiw, so it is eaten first thing in the morning.

Me, I don't eat pangat before it has turned a day old. Because then the ingredients haven't had time to meld their flavors together and impart this delicious harmony to the fish. Particularly to a bangus, whose milky sweet flesh is the perfect receptacle for the garlicky sourness of the stewing liquid. With the thick black belly fat slowly disintegrating with every reheating and melting into the stewing broth,  pangat defines a little invincible piece of homey goodness. Spooned onto rice and sprinkled with a pinch of large-grained rock salt, breakfast becomes a comfort that makes a hot day endurable.


Kai, Kudos and thanks a lot for this article on Impangat. I fish a lot as a hobby growing up in Dagupan. My wife a great cook is from Bulacan and for years we have this on going debate on Paksiw or Impangat. Your esoteric article settled everything. I owe you pasalubongs and dinner when I make it to Manila.

Hehe let me know then I'll be very happy to meet you in person!