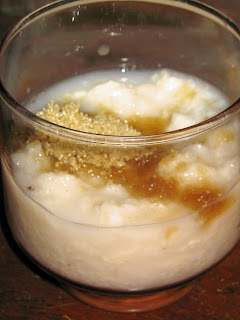 Binuburan is fermented rice sold on weekend - and market day -  mornings at the public market of my hometown in Pangasinan. The fermented rice is pressed on a banana leaf-lined bigao, or bilao, then again covered with banana leaves. A serving is a cupful, along which goes a plastic bag of water and sugar syrup.

It is meant to be taken and eaten home, where it is put in a bowl and mixed with the water - preferably cold - and sugar syrup.

Binuburan is different from the other fermented, odoriferous rice - buro - in that the latter is very savory, an appetizing side, while the former is sweet, and can be had as a meal, like some kind of porridge. Binuburan is called binubudan in the Ilocano language. 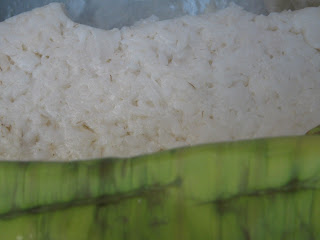 Binuburan is actually the first stage in the process of making tapuy, the Northern Luzon wine made from rice. It is in the phase when the rice has just been inoculated with the fermenting culture and has yet to turn alcoholic. But it has been allowed to ferment for a few days, up to a week, so it tastes slightly caustic, like an over-ripe pineapple or grapes.

It is also the culture introduced to sugarcane juice when making basi, the wine of the Ilocos and Central Luzon regions that is based on sugarcane. 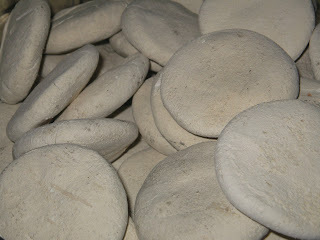 The culture comes in the form of hardened rice dough flattened into discs, looking a bit like free-form puto seko, but more like play-doh piso. These are called, unsurprisingly, bubur, and are available most days at the section of the market where local rice delicacies are sold. The bubur is crumbled and sprinkled on cooled boiled rice for it to start the fermentation process. Thus the name bubur, a permutation of bubud or budbud, describing the way it is used.

The bubur is made by mixing ground rice and pounded ginger with a small amount of a pre-made culture - the previous bubur - then fermented, molded, then dried under the sun.

Binuburan was actually exotic to me. That is saying a lot, because my life growing up in Pangasinan was full of what many citified folks would consider verging on the fear factor - consider snails, or frogs, or wild dwarf crabs. Fear factors extreme, actually.

But it was as exotic as coffee, which was forbidden to us children. So it was an exotic adult fare. Though it wasn't exactly forbidden - I never saw it in our house, and I never saw it eaten by any family member.

The first time I came across it was when I came upon a parish priest having it for breakfast. I thought then it must be holy. Over time I thought it was a male thing, like alcohol, or cigarettes. But when I got married I learned that binuburan is occasionally made at my husband's house, and eaten by the elders, who are all females.

So I got the courage to buy some at the market. When I lugged home my purchase I was scolded for taking the water, as it must have been fetched from the public CR. I didn't know it was just piped water, for diluting the binuburan. So I got cold, distilled and mineralized water and mixed it into the binuburan, along with some brown sugar for a caramel finish.

Binuburan takes some getting used to, and is an acquired taste, but so does buro. It has the same tangy sourness, but not as pronounced. It was refreshing, though, and perfect for the weather. But my cup was fininshed by my husband, who grew up eating the stuff, albeit home-made. The elders pronounced the market kind to be okay, but said next time we'll make some ourselves, and instructed me to buy bubur instead.


Grew up with that, so good, now I just have oatmeal instead. Also tried the Chinese version made with red rice yeast. Yummy.

Hi Flipster, was it called the same thing in your hometown? And how was the red rice yeast called? It must be a Chinese pamana?

I make tapuy at home using cooked malagkit rice inoculated with powdered bubur (from Baguio public market). After 2 days, the resulting white liquid taste sweet; after a week, it is rice wine. This is the same process for making the very popular alcoholic rice wine in Korea - makkioli.

The rice residue can be eaten as snack or cook in savory dishes (chinese recipes). Puto recipes across
Asia use this fermented rice to leaven this dish.

Thank you for sharing those nuggets of info, Victoria!


Hello Kai, Binuburan was made by my Grandma when I was growing up in Dagupan.The red yeast rice wine is called Ang Chow which my friend makes here in the States. We call it Chinese Moonshine. Wine or whiskey making here is illegal without a license. The leftover rice(lees) after the wine is bottled is added to misua and is heavenly delicious.

Ok, thanks! I can't imagine the misua, though, must be like it was doused with yogurt!

Having made and enjoying some right now brought me to this site. It was actually a risk making it since the bubur I used was at least a year old (albeit kept inside the ref).

I've never had one sour and tangy like buro (which I also WORSHIP :D) though, and I've been eating it since my primary school years in the 80s. The one you brought home was probably fermented longer. I 'harvest' and transfer mine in the ref only after a day and a half of fermentation at room temp. I did not want to push the process longer since I'm afraid the culture might grow molds (Okay, so I saw a few very fine strands of molds already, but I couldn't care less :D). The result is quite sweet and refreshing nga na hindi nakakasuya, or at least hindi ako nasusuya. I would have preferred it with a bit more alcoholic kick though. Maybe a few days more inside the ref would do that, if refrigerating it does not kill off the yeast.

Since making my own, I don't quite get why my lola, mom, etal. found the need to add sugar solution as I find it borderline sweet already. To dilute the alcohol, maybe, if you don't want to start them young? Although leaving it for a few hours or days with more sugar would defeat the purpose LOL.

I've always wondered but never had the courage to try making one out of glutinous rice. Now that Victoria mentioned it, I am compelled to try it. Thanks!

Hmmm, I have some black, brown and basmati rice lying around. Has anyone tried these?

Kambyo: It IS tangy, but, yes you're right, not as strong as buro. :D

No, and not as smelly as buro ;-) It's like peeled fresh pineapple that has been in the ref for a day or more.

I wish I had brought bubur with me from the last time we were home, so I could make some, too. Red and brown rice are available at the market so I'd like to try those, as well. Very interesting to know how these would turn out. I imagine the malagkit version would be awesome cold.

Yup. Mine is slowly getting tangier and more alcoholic, just a bit slowly though since it's inside the ref. Maybe I didn't kill off the yeast after all :)

Red and brown rice. Yeah. They're a bit more expensive so maybe I'll just try a cup each. They require more water to cook, so would that mean more juice? :D

Hello! longtime reader/lurker just doing a little back-reading :) hope you are well. your writing is missed!

Thank you for writing so detailed about it