Cakes to Give, and Receive 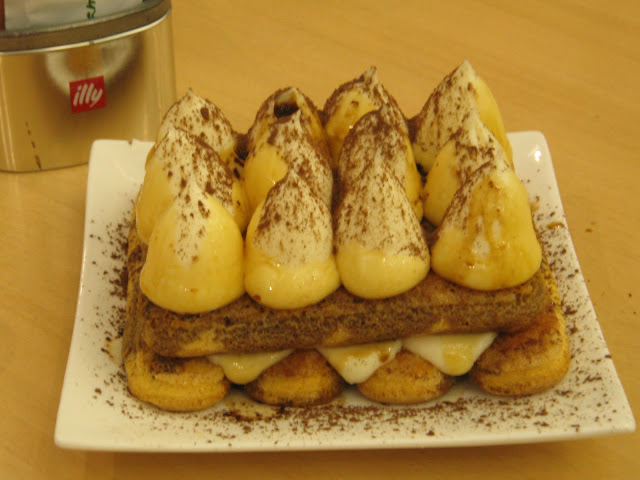 I’ve been giving these cakes throughout the year. To friends, on their birthdays, and as an alternative for Christmas when I couldn’t find the time to make something. To people I feel more or less obliged to – bosses, my children’s teachers after the school year or during school Christmas party, acquaintances who have extended favors. During potluck parties, for out-of-town hosts.

These are the cakes I also dream of receiving. But I dread opening cake boxes to find one of those I blacklisted three years ago, so to be sure I just buy one of these. Or two.

Each is worth buying whole, to share with the family, and expected - and unexpected - callers during the holidays. Though  a slice is also nice to have with coffee or tea in the afternoons during breaks from all the crazed shopping.

I also look forward to a calmer season, when all the festivities have come and gone, and I could sit in a lounge chair with a book, by the garden, lulled by the sound of running water from the fountain. I’d have a slice of one these cakes beside me, with iced tea, or cold milk tea, and sigh, with happiness and contentment. 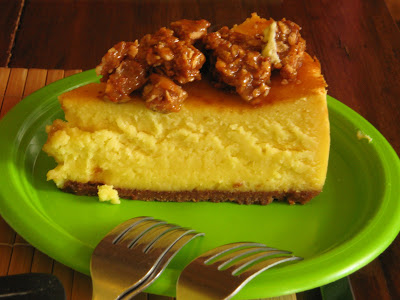 The depth and sharpness of flavor from a properly aged edam cheese is mellowed  by the candied pili nuts atop this cheesecake. The sweet caramel crackle breaks into the silkiness that languidly coats the tongue, affording a wonder of enjoyment.

This is one of just two QDB cheesecakes I know of available in Metro Manila. The other one, which came out earlier than this, was so bland and boring that I banished QDB as an ingredient worthy of a cheesecake. Good thing I checked this one out. I finally found a better way – a much better way – of enjoying queso de bola for Christmas. 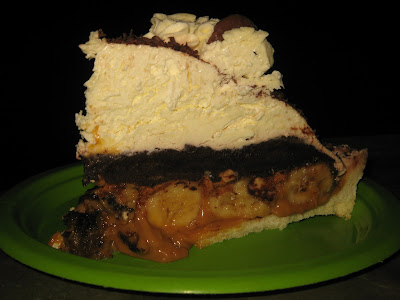 Just looking at that thick, gooey peanut butter makes me want to run to the Ayala Triangle Gardens to have a taste. Alas, I rein myself, because one slice is just too much for one, even for me. But I have the audacity to declare this is the best banoffee pie hereabouts - and I don't even think anybody has the right to be saying anything is the best anywhere.

But I do love this pie dearly - it is so full of contrasting flavors and textures that it never ceases to hold my awe, to the last bite. There's a chewy layer of chocolate atop which is that tall crown of whipped sweetened cream - which is actually edible unlike that atop the cakes being peddled next door - and below snake slices of fresh ripe bananas so malagkit I can't fathom what variety they are. Then there's that luscious peanut butter oozing out of every cranny and enveloping the bananas - the intensity of the experience is just too much. I take a breath, and ponder how such a simple dessert could do this to  me. 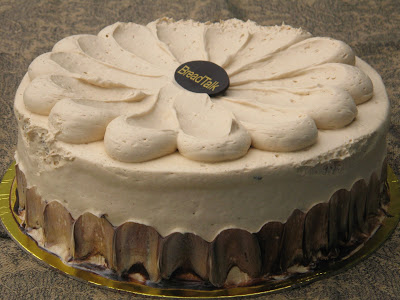 Happy Ever After
Bread Talk

My problem with the cakes at Bread Talk is the dryness – I can’t swallow the chiffon that’s the core and foundation of every one of them. But I had this cake at Buffet 101, and just one bite made my eyes grow round and lighten up like Gollum’s upon seeing his precious. The chocolate chiffon was light and soft – not too much, but at least not dry – but it was the hazelnut buttercream icing that decided it for me. Nutty, buttery, creamy, lightly sweetened to allow the hazelnut to lord it over. It's one of a kind - but try to buy this freshly made, and eat it at once. 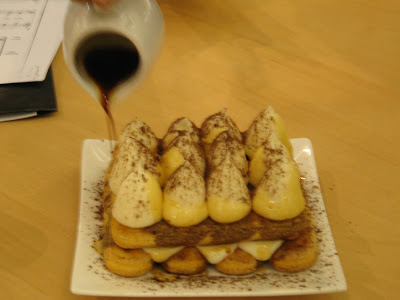 Again I'll be so bold to say this is the best tiramisu I've had in a long while - probably my whole life even - and I've had a lot, because my husband and I will always have it if it's on the menu. And I daresay tiramisu should be made this way, and this way only - pieces of excellent crispy broas or lady fingers not compact together but apart - spaced just so to balance one another, while in between are teardrops of sweetened mascarpone, the whole thing dusted with cocoa powder. Only upon serving is a demitasse of espresso poured on it, so that the broas are not soaked and limpid, but still possessing crackle and chew. The mascarpone is sufficiently sweet to stand up to the bitterness of the coffee, the balance enlightening me to what this dessert truly is all about.

I don't know if it can be ordered to take home, with the espresso, and how the travel time will affect the cake. Best to eat it at the cafe, and an order is good for three to four people. But I shared this with a friend, after a hearty lunch, and we had no problem polishing the plate between the two of us, it was that good, really. 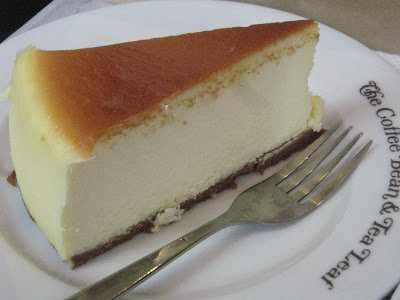 Yema cakes are the "in" cakes in the countryside. It's the promdi version of caramel cakes. I've had great ones from Quezon province, Pangasinan, and from Cagayan Valley. But this one is remarkable, and stands apart because of the addition of one ingredient - a lemony accent.

Eggs, butter and sugar boiled together becomes yema, which by itself is ambrosial, but is elevated to a whole new level of divinity when something citrus is introduced. The tang breaks the cloying sweetness, and perfumes it with zest.

The chiffon  in this roll is so soft it is almost unable to withstand the yema it looks to be drenched it. But I am grateful for the excess, licking the yema from my fingertips.

Yet another yema dessert, this one in the form of that impossibly thin layered cake that resurrects and resurrects in various forms. The difference with using yema is the structure and form - because it is boiled, it doesn't really melt. And because yema is the stuff of childhood sweetness, I feel gleeful biting into yema that cracks, crackles, and breaks. 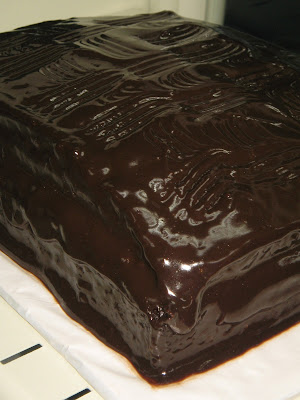 Chocolate Cakes
Everybody bakes, or sells, a chocolate cake, it seems. I even tried to bake some, and I realized how truly, honestly difficult it is to come up with something moist enough without being too sweet, and being powerfully chocolatey but still soft and light. So now I have great respect for bakers who can realize the impossible.

And they're not that many. Chocolate cakes that have impressed me are made by the following:

I hope with this post I have made amends on that venomous blacklist that's perpetually on the Popular Posts bar of this blog. I hope it gets on that bar, too. And with that, wishing all of you a sweet and joyful Christmas!

More Cakes to Give

Email ThisBlogThis!Share to TwitterShare to FacebookShare to Pinterest
Labels: cake of the month, malamis (matamis/sweet)