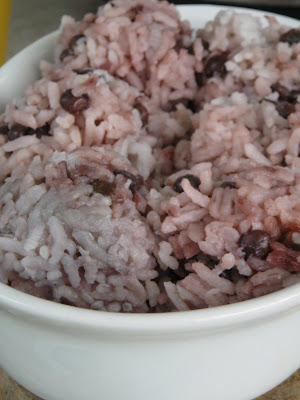 Lamud is farmers' fare, eaten in homes located in the fields of the island of Negros. I have to note here that I'm not sure what is planted in the fields, because it is usually rice, but Negros is known for its sugar cane fields.

Not a lot of people know what lamud is. I have asked, and I have a lot of friends from Negros. I have gathered that not even a lot of people eat it today. For it is not appealing to our generation, who grew up on white refined rice, and burgers and fries.

It was just my luck that one very generous Negrense reader shared his thoughts, and brought my attention to this very unique, traditional Negrense food, partaken by his father's generation. You can read his very lively discussion in the Tagalog language in the comments section of my post about batwan.

Lamud is rice mixed with beans common in the region - kadyos (pigeon pea, Cajanus cajan). Kadyos is popularly known in Metro Manila as one of the three main ingredients in the Ilonggo dish KBL, or kadyos, baboy (pork), langka (jackfruit), in broth soured by batwan.

I promised to make lamud as soon as I got my hands on kadyos, which is not commonly found in Metro Manila, more so in Cavite (and non-existent in Pangasinan). I even dared the reader, who I christened Yang Chow Guy for his affinity to yang chow fried rice, preferring it over lamud, and another Ilonggo friend who knew about lamud from his father, to eat lamud, or risk being outdone by me, a non-Negros native.

I haven't heard from them since. But the forces of the universe conspired for me to have kadyos. For two weekends ago, another dear friend toured me around Quiapo, and what should I see at the Quinta market but a heap of kadyos pods, green and a little furry, and still very fresh. 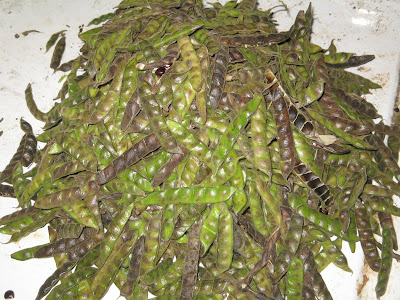 [kadyos pods]
Beside it is a small shallow plastic bin of peeled beans, ready to be cooked. In my mind a bulb blinked on, and shone like a spotlight that was difficult to ignore. So I bought three plastic cupfuls at Php15 each, and mixed half of it with a cup of rice as soon as I got home. The other half went to KBL that was soured with tamarind, since there was no batwan to be found.

The beans were soft, since they were freshly shelled, as soft as peas, and as big. They had a greenish, red violet/deep maroon hue, which proceeded to leach out to the rice when cooked. The cooked beans lost their sheen and vibrant color, and, frankly, looked like fat garapata (sorry, I'm not going to translate that). 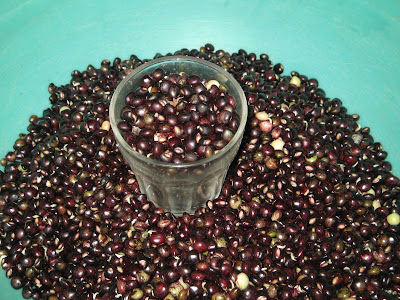 Kadyos has no distinctive taste, and so the lamud didn't taste any different from ordinary steamed rice. The only distinguishing features were, first, the color, which was marbled violet, and second, the texture, which had soft bean-y punctuations.

But over-all these two didn't interfere, or make any more distinct, my enjoyment of my meal that dinner. It looked very similar to the red or brown mountain rice of Northern Luzon, though not as rough. I put a premium to it, more than how I value whole grain rice, knowing it is laden with fiber, and probably vitamins and minerals that fruits and vegetables naturally have.

It made me think of the government drive early this year, when there was a global shortage of rice and the prices were uncontrollably shooting up, for Filipinos to add cubes of kamote to our kanin as an extender. To which I had no qualms, since I know for a fact that kamote is beneficial for children.

But it's easy to deduct the reasons for this generation shying away from lamud - the main one being that it's associated with the hard life, being rural fare. And most probably kadyos, when in profusion, is added to the pricier rice as an extender.

But for me kadyos is an added premium to lamud. It makes rice special. So lamud translates to special rice.

I am posting this today in celebration of the ongoing rice harvest, and in memory of our ancestors, who knew the value of the food sprung from the earth.

And for you, Yang Chow Guy, and to my former blockmate and now kumpare Gene, this is for you both. May you honor your unique heritage.

It had been a crazy two weeks - I was caught up in a whirlwind of frenzied activity involving the kids, plus an out of town trip for me. My presence at the office had been erratic, and obviously I haven't had the time to update here regularly. Which was unfortunate, since during these two weeks I have had great finds, and I had compiled enough food photos to last a couple of months.

Anyhow, I'm back, and I'll try to upload regularly from my already crowded thumb drive, which had received quite a few unloadings from my camera. I'm still trying to organize things in my spanking new notebook (thanks to my Flynn, who made off with my laptop but replaced it with the latest model as a gift ;-) ).

*Update, Nov. 3, 2008: A reaction last Saturday from a reader in Bacolod City indicated that the term lamud generally refers to a mix of anything.

The specific examples given were a "lamud of jackfruit or green papaya" for the cansi ingredients (Green papaya? Are you kidding me? I must have some!), or "the rice has a lamud of corn" for rice mixed with corn (I hope I got this right).

I know I'm bound to get mixed up (pun intended), or commit unintended errors when dabbling in a culture not my own. So thank you for pointing things out, and for other corrections to come.

Hi, Kai! What a surprise!

I know about what colors our perception of food, because there are many biases I'm trying to overcome myself, poor man's fare included. But I think farmers and their families are luckier and healthier than most of us, when they have lamud regularly, as it is more beneficial than ordinary white rice.

Actually, I have a surprise for you in the next few days. Stay tuned!

Hi, ren! Eugene here. That’s a splendid article about Lamud. You are very keen to associate this dish with the social realities of Negros.

Well, we probably don’t have to spare ourselves from our biases with food when we introduce and celebrate Filipino dishes. After all, some foods are really enjoyed by the affluent, others by the humble. Food hasn’t been known to transcend the social divide. Who enjoys fettucini, and who enjoys galunggong? We all know who.

When we consider nutrition, however, I believe as much as you do that we should rid ourselves of these biases. Surely, there should be nothing odd about the landlord taking Lamud. If Lamud is more nutritious than white rice, it should be for everyone. Being into fitness, in fact, I have created my own biases, and I have lost liking for the classier ones we know, those that carry more calories.

I am amused by the comments of our friend, the Yang Chao guy, and from a mile away he is a true Negrense. Yes, baye-baye is an Ilonggo food, originating probably in Negros or in Panay.

Baye-baye is another favorite of my father. I remember spending Holy Weeks in his barrio, as rural as any. By a clearing below the bahay kubo, my cousins and I would watch aunts and uncles prepare this fare.

I should give the Yang Chao guy the honor of telling you how bay-baye is prepared, as he always seems to pull his pistol faster than I could when it comes to introducing you to Ilonggo dishes, Kai. If my aunts and uncles prepared this any differently than Yang Chao guy does, I will tell you so. For now, however, I will leave you with this caveat – baye-baye is not easy to prepare.

Thanks for the acknowledgment, Kai, and I hope to hear from you and the Yang Chao guy, soon.

Yes, Gene, that's so true. Food doesn't transcend, and doesn't level the playing field for all of us. In fact it is one of the main economic forces which serve to further differentiate the social classes.

Food tells a lot about our culture. In Iloilo where rice is very abundant compared with Negros, eating rice with "lamud" means life is really hard.

Gladita, I always hear and read about kalamay-hati, but I never seem to encounter one.