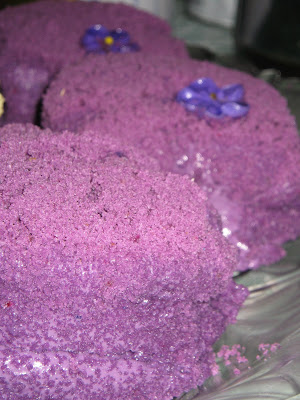 Ube (Dioscorea alata), known in the English language as purple yam, and in botany as water yam or winged yam, is a violet-colored tuber found extensively in the country, albeit seasonally. It can also be found across Southeast Asia and India.

It is added as flavoring to a lot of Filipino desserts - pastillas (milk rolls), barquillos (wafer sticks), ice cream, ginataan (cooked in coconut cream), as filling in hopia and siopao and other pastries and breads, cakes. But its most common form, and the most popular way of eating it, is haleyang ube, which is translated as "ube jam," though this is not quite the right, or the most accurate, term.

Ube haleya, or halaya, or just ube, is the tuber boiled, peeled, mixed with milk and sugar (or condensed milk), and endlessly stirred while cooking over low fire.

If cooked right, it is a viscous, thick and creamy spread, silky smooth and sweet. Ube lends well to sugar and milk. In our family we sometimes add grated cheese, which then makes the ube a salty-sweet, creamy affair.

A spoon is dipped again and again, into the bottle of ube, any time of the day, and into the night, until the bottle is empty, and the spoon licked clean. This is spelled h-a-p-p-i-n-e-s-s, to the nth degree. The state of being ube-r happy.

Good ube halaya is hard to come by. Some commercially sold halaya substitute other tubers, as real ube is expensive, and add food coloring to get the violet hue. The most popular commercially sold brand - which is also the most reliable in terms of quality - is Mountain Maid, made under the auspices of the Good Shepherd nuns in Baguio City (and Tagaytay).

Though I love it as halaya, I also love ube (as I think any self-respecting Filipino does) in any other form. And of course I love it in cakes.

But ube cakes are rare. The only commercially available one, throughout the year, is at Red Ribbon. It is a good one, though I have misgivings about the amount of whipped cream lacing it.

So for this cake of the month series I went on a quest for a good alternative. But I drew blanks. Not because I couldn't find good ube cakes, but that I couldn't even find any. I called several specialty bakeshops who had ube cake in their product list, but they all went back to me saying they couldn't make one, because good ube was not available in the markets.

Then I hit the small tea salon Tea Republique, which I haven't been to in years. And in the chiller a mini ube cake (about 4 inches in diameter) sat, which I had to try. And there my ube cake quest ended.

It was deliciously wonderful, and very ube-ish. An ube cream mousse sits between two layers of ube chiffon, the entire cake dressed with ube "crumbles" (or perhaps crumbs? anyway, they look like dessicated ube).

A pretty lavender sugar flower adorns the top. It looked simply gorgeous, and tasted pretty heavenly. It is ube in many forms, with no other interfering taste, like in other ube cakes where it is commonly paired with macapuno (sweetened dwarf coconut), or cream.

I asked who the supplier of the cake was (all their desserts are outsourced), and I was told it was The Purple Oven. I called the bakeshop and was told it didn't make ube cake. When I went back to Tea Republique I was told it was Jam. No bakeshop named that way existed in the internet, or in the yellow pages.

So this is Ube Cake sold by Tea Republique, made by an unknown bakeshop source. I was hoping to contact the supplier to request a party-size cake, because at Tea Republique I was told they only have mini cakes (Php105 each), and of course identify the maker.

I ended up buying mini cakes in the number of my daughter's age in months, but was short by one. Tea Republique, being situated in an area mainly populated by offices, receives cake deliveries on Mondays only. They order 12 pieces mini ube cakes weekly. As my daughter's month birthday fell on a Monday and she still has several months to go before she turns a year old, I thought I could get the necessary number of mini cakes without pre-ordering.

I got the mini cream cheese-frosted carrot cake as a last piece, which was good, matching the ube cakes in color and became the centerpiece, but it was the last one to be consumed. Because the ube cakes were really great. Luscious is their name. Especially good eaten cold.

Even the baby loved it. We had such a hilarious evening watching her stuff her face with half a mini cake. 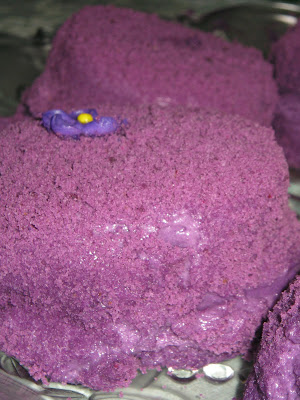 [the ube cream mousse melted during the cakes' trip to Cavite, causing the cake to "collapse," the top layer sliding down]

*Update: A reader very kindly pointed out that this cake is made by Goodies N' Sweets. I went to their shop at Rustan's Makati today and verified it. And the good news is, a party-sized ube cake can be ordered, two days in advance. Thanks, Carol.

That ube cake looks so good. I can get ube ice cream in the Filipino grocery store. Also, just ube with roasted coconut (it is sticky and it is in squares). I don't go as often since I no longer drive. I will try to get Mrs. L to take me one of these days. Happy birthday to your daughter. Roz

The mini cakes are from Goodies and Sweets. I got this mini cake and a couple other flavors at their Rustan's Makati branch a few months ago :-)

Thank you very much Carol! Will check it out!

a good ube cake is really hard to get by..thanks for sharing the info..i can't wait already to try it out..:-D