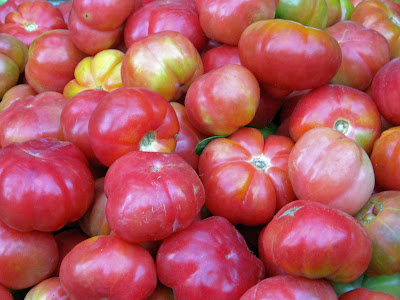 "Native" means it is endemic, or is traditionlly rooted to a specific place. It is what is used to refer to this kind of tomatoes, to differentiate it from the common Filipino tomato, which is round, yellow-reddish, thick-skinned and acidic.

Probably the more correct term is heirloom, but in the countryside native is understood well enough, while heirloom would be Greek, its pronunciation subject to a lot of interpretation from North to South (let me see, irlum, erloam, hherlom...).

This heirloom tomato is more bulbous, some segmented, the cross-section of which results in a beatiful star, or flower, is pinkish without any yellow or red or even orange shading, skin as thin as an onion's, and sweet without any hint of acidity.

Its native designation nonetheless, it is not commonly found anywhere in any market or town. It is highly seasonal, appearing during summer in Pangasinan, and only for such a short period.

Though it is sold for the same price as the common tomato, Pangasinenses value the native kamatis more. Since it is thin-skinned, it is not cooked, but just sliced and eaten fresh, with rock salt, bagoong or agamang. Which is just the perfect accompaniment to anything grilled. As it can be had only during summer, it is the side of choice during frequent summer outings - to the beach, or picnics under mango trees. 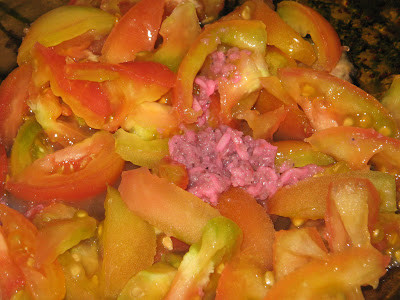 I love native tomatoes with salted fermented krill, best made in Lingayen, and it featured in many a summer evening meal as I was growing up. Sultriness meant lazy days, and summer dinners usually called for fried tinapa (smoked scad), eaten with rice and sliced native tomatoes seasoned with agamang.

My childhood was defined by souped rice - rice inundated with soup made from vegetables, the vegetables usually mashed up and mixed in. During summers of tinapa and tomatoes, my mother didn't bother to make soup, but she improvised by letting the tomato juices leach from the saltiness of the agamang. The juice became my soup. Sometimes, actually most of the time, my mother poured a bit of water onto the tomatoes, and the resulting juice-water mix was then poured onto my rice. 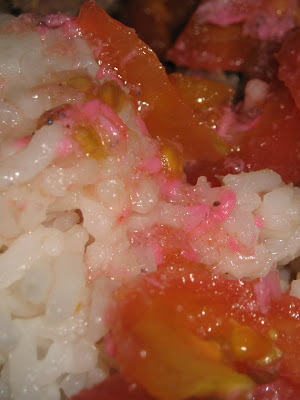 I don't think that was just my mother's caprice, since sometimes I see my husband pouring water onto our tomato-agamang salad, too, then proceeding to spoon the "juice" onto his rice.

More than the sentimental value, the tomato-agamang mix, with soup, is a prized side to fried and grilled fish that makes my mouth water. The freshness and sweetness of the tomatoes is countered very nicely by the meatiness and saltiness of the minute shrimps. Such that I cannot live without agamang. And heirloom tomatoes.

Thank you Kai for the translation to that song. I want to be sure Mrs. L sees that song. I use to sing it all the time when I was little in Manila. Roz

Oh, I miss this kind of tomatoes. My parents use to plant this kind.

Brings back a on of memories. Usually we serve kamatis on rice with patis and red egg. Great stuff.

The native Filipino tomato tastes wonderful, but it is very fragile. You dare not leave it on the vine after ripening, as it will fall apart within a day or two past when you should have picked it. In addition to extra thin skin, the walls are fairly thin also. This means the tomato packs a lot of water inside, along with an abundance of seeds. It tastes great on a sandwich, but if you put it directly onto the bread it soaks right thru. If you allow some of the ripe tomatoes to fall to the ground the plants should re-seed itself fairly easily, and come back year after year without you having to do any work.