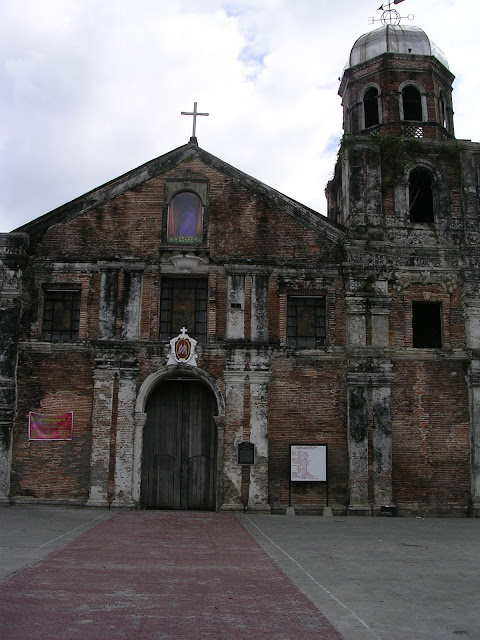 One of the oldest churches in the Philippines, the original church in Kawit is still almost intact. Built in 1638, its facade and thick walls are made of red brick. Thick stone buttresses projecting from the outer walls on both sides of the church reinforced it so it was untouched by the earthquakes that ravaged other old ones in the country. 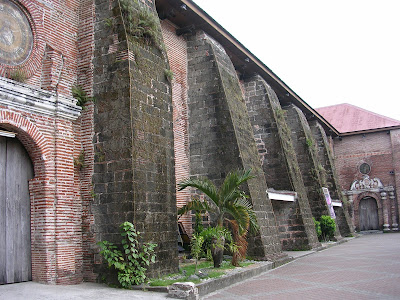 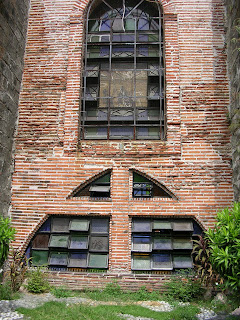 Among all the churches in coastal Cavite, only the St. Magdalene church is adorned with stations of the cross rendered in stained glass, that serve as the center point of the glass windows all around the outer walls. 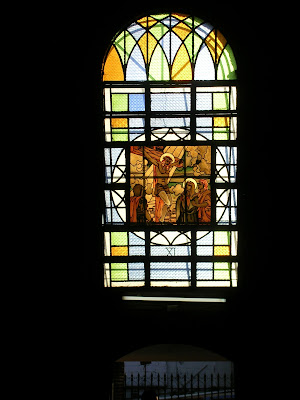 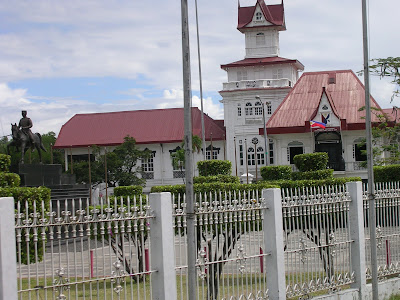 Historical Significance
The Kawit church was where the first Philippine president Emilio Aguinaldo was baptized. His birth certificate is on display in the museum at the back of the church.

A stone's throw away, back a few hundred meters, is the Aguinaldo shrine, where the Philippine flag was first raised upon the declaration of Philippine independence from Spanish rule, on June 12, 1898. It is just the original place, though, since the building, which was the ancestral house of the family of former president Aguinaldo, has since been enlarged, and presently sports pink painting including its perimeter walls. Inside, turn of the century spacious dining and receiving areas have thankfully been preserved, including the thick narra furniture. 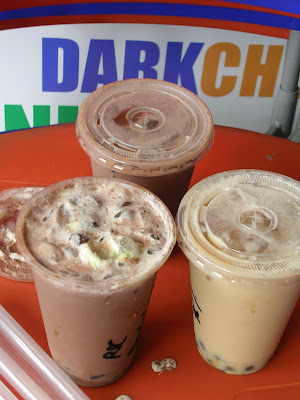 Pit Stops
- Just before the turn to the Aguinaldo shrine is Neng's Bibingka, serving thick, galapong bibingka that's as big as platters.
- A few meters from the church, across the road, is a milk tea counter inside an internet gaming station. The drinks at Milk 'n Tea Way are unimpressive, but the rock salt & cheese iced dark chocolate is remarkable, and I'd like to go back for the caramel variant.
- The Tirona Highway, on which the Kawit church is located, turns left then right and becomes the Magdiwang Highway on the way to the adjoining town of Noveleta. Here is where the original Josephine's restaurant is located, amidst fishponds.
- Just before the Kawit fire station is the Japanese restaurant Sasahama, frequented by Japanese investors in the locators at the Cavite Export Processing Zone.


Directions
From the last Bisita Iglesia church - Bacoor
About 6 kilometers south-southwest
By Private Vehicle
- Turn right from the church and go along the street, turning right at the rotonda in Mabolo - marked Freedom Park Bacoor - onto Tirona Highway. Go straight until the right turn at Gahak in Kawit, which circumscribes the Aguinaldo shrine. The church is right at km. post 23, after the right turn from the shrine.
By Public Transportation
- On the street in front of the Bacoor church, flag a jeep going to Binakayan. Get off at the Mabolo rotonda (Freedom Park Bacoor), and there board a baby bus going to Cavite City. Ask to  be let off at the Kawit church.
From Manila
By Private Vehicle
- Kawit is 23 kms. out of Manila, traversing Coastal Road (Pasay City & Las Pinas), Cavitex (Manila Cavite Expressway), and the Tirona highway. At the junction just out of Cavitex turn right onto Tirona Highway, skirting the Aguinaldo House, then right to Wakas. The church is on the right side just at the km. post 23.
By Public Transportation
- Air-conditioned buses with the signboard Cavite City get passengers starting from Plaza Lawton (Liwasang Bonifacio) in Manila, traversing Taft Avenue, turning  to Quirino Avenue, then left onto Roxas Boulevard and then on to the Coastal Road,  Cavitex, and the Tirona highway. The buses pass right by the Kawit church.

Thanks for the inspiration!
I was looking for a confirmation that Kasilyo can be 'used' as Italian Mozzarella, and I found it in your blog.

What I did not expect was an exceptional write-up on St. Mary Magdalene Church and the environs.
Now I have more reasons to go back to my hometown Kawit.

I was there just last March to celebrate our school's 50th anniversary.
Thank you!