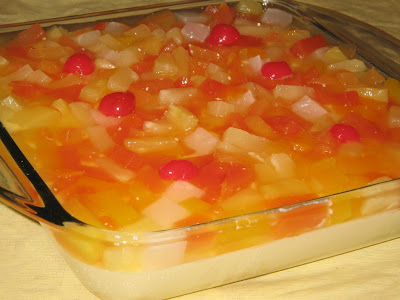 This is part of an ongoing series, "Tinapay," about local breads and cookies found in street corner bakeries across the Philippines.

I would like to venture a guess that no Filipino, whether here or abroad, is unaware of crema de fruta. Endless variations exist, though all retain the basic combinations of a crust, a cream mixture, fruits (fresh or in cocktail syrup) melded by gelatin. It is made any season, but it is distinctly a Christmas thing - it is our Pinoy version of all those fruit cakes around the world.

I have written about crema de fruta previously as a coveted gift and my choice Christmas give-away one Christmas. I have noted that that post sustain search engine hits year-round, but that starting about a month ago the increase in hits from around the world has been very significant.

I am including it in the Tinapay series even though it cannot be found in any streetside bakery, but because almost any Filipino household can make its own version. Of course the more popularly known middle class bakeshop chain that most balikbayans remember carries crema de fruta year-round.

But I never buy, because I can make my own crema de fruta, at less than half the cost of a store-bought one. And so I would like to share a recipe for crema de fruta that my family had been using for a long time now. We made it once a year, and only during Christmas - it is almost sacrilege to make it outside of the holiday season. It is very easy to make, involving no cooking, using ingredients available anytime anywhere around the globe. I have tweaked the recipe to suit my tastes, and I believe the recipe below is the best one I have made. 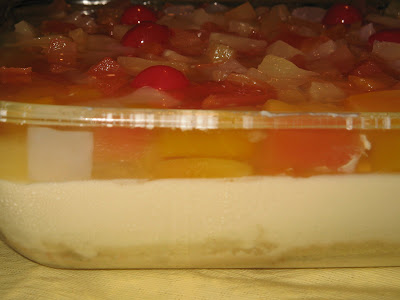 Good for an 8x8x4 dish, for about 6-8 people.
Can last up to two weeks inside the ref, although an 8x8 is good for only one sitting in my family.

The crema de fruta that my mom used to make had graham crackers as base, the thickener for the cream was dissolved cornstarch, and no condensed milk. After many years of making the original I ventured into using cakes as base, to make it more festive. I love the butter cake base - its density holds up slices real well, and it adds decadence to the dessert.

I also like the cream-gelatin mixture because it is so much lighter than the thick, gooey cream made from using cornstarch. The resulting cake is a combination of textures, from gelatin to soft, flanney custard to rich cake base. It is a bit tricky to use, though - the cream-gelatin mixture has to have thickened enough (the reason for the brief sojourn inside the ref) so as not to be absorbed by the cake base.

Although I once made the mistake of pouring hot cream that instantly soaked the crust, and resigned myself to a disaster dessert. But good thing I had already started using butter cake that time, because it held up, and nobody noticed the difference. Imagine if I had used chiffon or sponge!

Nice new look of your blog and compliments very with your "Crema de Fruta" pics and the fast approaching Cristmas.

Thanks for sharing your recipe on this and I'll try to make one this holidays. From experiences I'm quite a disaster when it comes to gelatin so I'm already hesitant to use it. Maybe I'll just follow the gelatins instructions carefully so as to avoid the disastrous outcome.

Thanks, copperfish. Maybe you should try the cornstarch variation. But here's a secret, when my gelatin does not gel, I reboil and reboil, or add more powder, until it solidifies. ;-)

OMG!... this is making me hungry for dessert.. it's one of my favorites, i havent tried making crema de fruta yet, but I will, one day! Thanks for sharing.