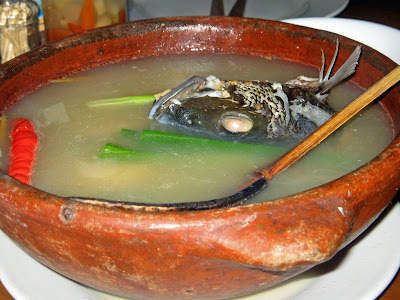 Aboy’s seems to be the Bacolod equivalent of Breakthrough in Iloilo, Silverio’s in Dagupan, Stephanie’s in Tacloban, Bob Marlin’s in Naga – it is where you take guests from out of town to experience the best of the local cuisine.

Aboy’s is native to the hilt, a large open pavilion structured with bamboo, or bamboo look-alike, nipa, capiz, though there is an equally huge air-conditioned area that one can seek shelter in from the outdoors if it proves too sultry.

But the food’s not really native, if you ask me. In my opinion, institutions like the cansi houses at the shopping district and Manokan Country are excellent representatives of Hiligaynon cuisine, specializing in specific dishes done best because they’ve been serving them for countless years.

At Aboy’s, just like in the above-mentioned restaurants in other islands across the country, you eat seafood - seafood that abounds in the area. So at Aboy's there's managat, the sweet, succulent tilapia look-a-alike that I've only encountered in Panay and Negros. We had it in a batwan-soured broth. 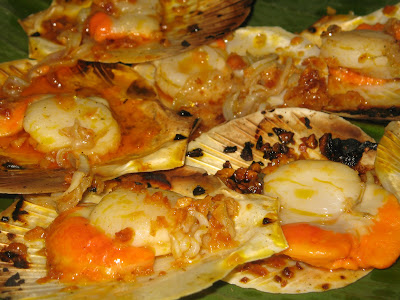 Juicy scallops done the way I like them - buttered, baked and sprinkled with lots of crispy fried minced garlic. 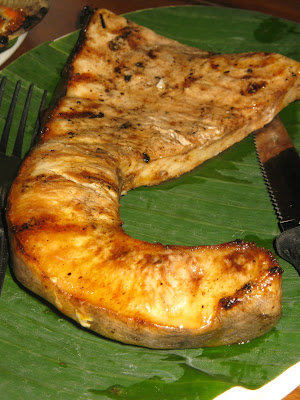 Then there's blue marlin, which is everywhere - you can order it in any restaurant you go to in Bacolod. At the Burgos public wet market I saw beheaded, rotund carcasses of blue marlin waiting to be sliced, the vendors labeling it pork from the sea. Everywhere, like at Aboy's, it's served simply, grilled and buttered. Perfectly succulent. 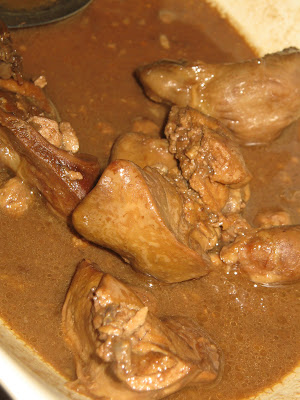 We had adobong atay na manok, and I was expecting it was adobo Bacolod-style, which is without soy sauce, but this one was just like any other liver adobo. 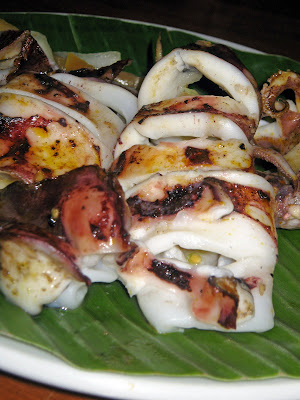 Stuffed squid, grilled rare. Fresh and and soft, not a morsel chewy. 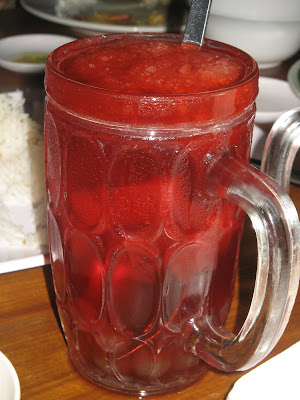 This was supposed to be the special drink at the restaurant, and all tables around us ordered it. It was like sago't gulaman, only that it was tasteless. But it was okay, since I was in the land of sugar, and I did not for a minute lack anything sweet.