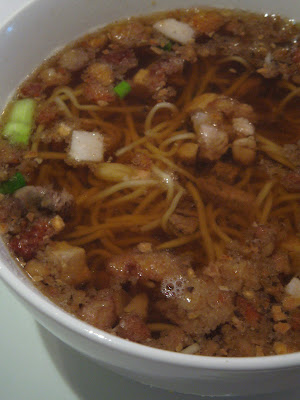 From southeastern Luzon I jump over to the other side and land on genteel soil, in Bacolod City on the island of Negros (in the western Visayas), to let the kids exult in the revelry of this year’s MassKara.

The city of Bacolod celebrated its charter day last Tuesday, but the 72nd founding anniversary was preceded by two weeks of festivities, the most well-known of which was the maskara festival, in the form of masked street dancing that has evolved into inter-school competitions.

I had been in and out of Bacolod for the last twenty years, developing lasting friendships with locals over that time. I had eaten various home-cooked meals there, received countless food gifts, as well as tried many commercial establishments, which was why there are a number of posts on the food of the area. I felt that from the first time I went there, I had never actually left.

But this was my first time to attend the festivities, and I was surprised to learn that the merriment of MassKara, a highly vivacious festival in the spirit of mardi gras and Octoberfest, was rooted in tragedy.

In the late 1970s, the sugar industry, to which Negros is firmly rooted, suffered a depression due to a slump in world prices. Life became hard, which was aggravated by the sinking of a ship that carried hundreds of Negrenses.

In an effort to rebound and to lift the mood of the local citizenry, a festival was created. But of course it was hard to put on a happy face when your lifeblood is fast slipping away, so the people of Bacolod employed smiling masks – maskara in the local language – to conceal the pain.

Today Bacolod, and Negros, is vibrant as a foodie and tourist destination, and the heightened demand for muscovado has revived the sugar industry. Hardship has not even taken a toll on the locals’ love of life and the pleasures it brings, and heightened pride in its own that translates to generous hospitality extended to visitors.

Case in point: the batchoy, regular variant (miki in soup with chopped pork, pork cracklings and fried garlic), was on a "refillable" promo at 21 Restaurant for the whole month of October in celebration of the MassKara.

So we order a bowl, and after learning it tasted quite good, placed an order for an additional bowl. The waiter raised an eyebrow (or maybe it was both eyebrows), and replied that we have free refill (or refills) for the bowl we were slurping from at the moment. Stumped, we were speechless for some long seconds, and then simultaneously asked, a bit sheepishly and in a low voice, if we could then have an extra empty bowl?, so the others in our company could eat from their own bowls.

Of course, we were given an extra empty bowl, and two adults and two kids ate their fill of batchoy for Php80, which was the price for a single order of the regular variant. In a restaurant that had a high end reputation and whose clientele were the who’s who in the area and visiting prominent people from out of town.

It was heartwarming, knowing that a "no sharing" policy are emblazoned in bold, capital letters in restaurants elsewhere offering buffet spreads or "eat all you can" promos. But it wasn’t surprising, knowing that chicken restaurant chain Mang Inasal, which has given nightmares to most Metro Manila based chains with its unlimited rice (prompting many to offer the same), originated in Bacolod. It would be interesting to see what the owners’ next move would be after Jollibee’s acquisition of the chain, at Php3 Billion in cold cash. 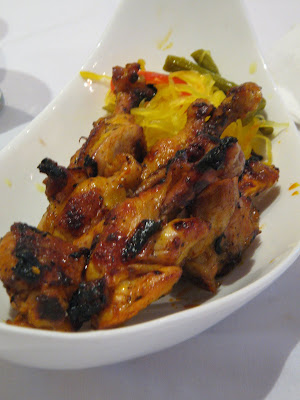 Inasal Lollipops
But back to 21’s batchoy – I had actually pestered my good friend and local host for this trip for a bowl. He was hesitant, proud and loyal Bacoleňo that he is, reasoning that batchoy from Iloilo-based houses was better. Batchoy was born in Iloilo, after all.

On the night of our arrival we went straight to 21, but it was so full of revelers that had come in after prowling the closed Lacson Street that we had no choice but to seek an alternative. We were offered either Deco’s or Ted’s, two of the institutional Iloilo-based batchoy houses with outlets in Bacolod, but I had eaten batchoy in Iloilo, so I declined.

The following day, after a very informative excursion at the Negros Museum, I again broached the idea for lunch to avoid the crowds at night, and the patient host asked why I’m so sold to the idea of eating batchoy at 21, further asking where I have learned about it.

Truth to tell, I have read and heard so much about it from visitors to the city, but it was the super special variant everybody was raving about. Batchoy in Iloilo and Bacolod has three variants - regular, special and super special. The special batchoy has additional strips of liver, but 21's super, instead of innards like the Iloilo version, has bone marrow. A cross between batchoy and bulalo, if you will. 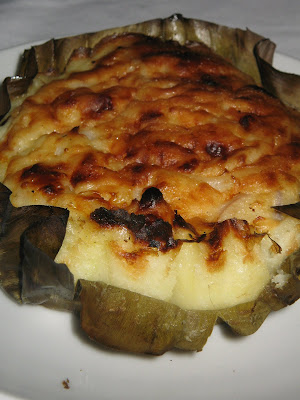 Aling Nitang's Bibingka
I would have ordered the super as our additional bowl, but since we were made to accept that one order is enough, I wasn’t successful in my quest, though I was able to preserve my unobstructed arteries. For the moment.

Nevertheless it was an experience eating at 21, particularly eating the regular batchoy with Aling Nitang’s still-warm bibingka. It was full of buko strips and was so moist the texture was almost like a pudding, and was so hefty. Though it didn’t have slices of salted egg like it was described in the menu, it was still delicious as it was lightly sweetened so the contrasting saltiness wasn’t really needed. 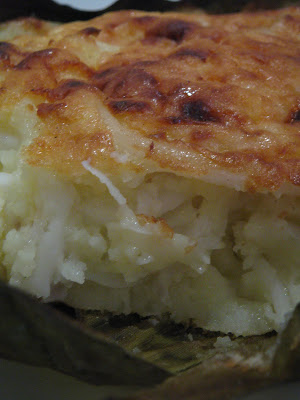 As for my friend, he said there was a marked difference between Iloilo and Bacolod batchoy. And I agree – the Bacolod version at 21 was pretty straightforward, while the Iloilo batchoy I’ve had at Ted’s and Deco’s at their original outlets in Iloilo were richer and had a sweetish component to it.

But I think with the grace and generosity exhibited by the 21 staff, in the midst of a very crowded day, he was won over. For me, the ambience alone was more than enough to make up for the Php30 or so premium for 21’s batchoy.

So when I go back to Bacolod, I’m bringing a blood pressure monitor.

Wow bibingka! I remember Christmas in Philippines where you have to wake up really early for simbang gabi and have bibingka and puto bumbong for breakfast!

Oh yes, the hallmark smell of Christmas - burnt banana leaves lining the bibingka pan. But bibingka is so good it's now available year-round. So it can be Christmas anytime!